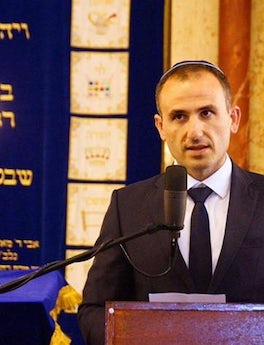 Archeological findings indicate the presence of Jews in what is today Bulgaria as far back as the Roman period. After the establishment of the First Bulgarian Empire in 681, a number of Jews persecuted in the Byzantine Empire are believed to have settled in Bulgaria.

In the 14th century, Tsar Ivan Alexander (1331–1371) married a Jewish woman, Sarah (renamed Theodora), who had converted to Christianity and had considerable influence in the court. A series of legends arose around Theodora, who is venerated in Bulgaria as a saint-like figure. Their son, Ivan Shishman, is also regarded as a great national hero. Nevertheless, a church council of 1352 led to the excommunication of "heretics," and three Jews were sentenced to death and later killed by a mob, even though the tsar had lifted the convictions.

By the time the Ottomans overran the Bulgarian Empire, there were sizable Jewish communities in Vidin, Nikopol, Silistra, Pleven, Sofia, Yambol, Plovdiv (Philippopolis) and Stara Zagora. A wave of Ashkenazi Jews arrived in Bulgaria after being banished from Bavaria in 1470.

The first Sephardic immigration wave to Bulgarian commenced after 1494, with the newcomers settling in the already established centers of Jewish population. The modern capital, Sofia, had distinct communities of Romaniots, Ashkenazim and Sephardim until 1640, when a single rabbi was appointed for all three.
In the 17th century, the ideas of Sabbatai Zevi became popular in Bulgaria, with supporters of his movement, like Nathan of Gaza and Samuel Primo, active in Sofia. Jews continued to settle in various parts of the country, extending their economic activities due to the new rights extended to them.

In 1878, after Bulgaria was liberated from Ottoman rule following the Russo–Turkish War, Jews were granted equal rights by the Treaty of Berlin. The rabbi of Sofia, Gabriel Mercado Almosnino, together with three other Jews welcomed the Russian forces in the city and took part in the Constituent National Assembly of Bulgaria in 1879. However, signs of anti-Semitism and discrimination soon began to emerge.

Jews were drafted into the Bulgarian Army and participated in the Serbo–Bulgarian War in 1885. The Treaty of Neuilly following World War I emphasized their equality, yet anti-Semitism began to spread and was indirectly promoted by the governments of the time. The Bulgarian Jewish community found much of the anger and resentment that the gentile population had concerning their country’s destitute state of affairs directed at it, and as a result, the Jewish population in Bulgaria began to decline.

The interwar years saw the majority of Bulgarian Jewry concentrated in Sofia, with much of the community self-employed and engaged in commerce. There was a flourishing of Zionism during this period, despite the younger generation displaying a sense of assimilation by speaking Bulgarian instead of Ladino, the language of their fathers. However, all of this occurred under persistent and prevalent anti-Semitism that was inextricable to the country’s alignment with Nazi Germany.
Under the Communist regime following World War II and the Holocaust, the Bulgarian Jewish community found itself cut off from the rest of the world and wider Jewish organizations. The community was largely impoverished.

As Bulgaria became more and more communist, there was a concentrated effort in wiping out Zionist manifestations in the country. Throughout the latter half of the twentieth century, Bulgarian communist authorities viewed outside influences with deep suspicion and disdain, with “illegal” movement from Bulgaria to Israel considered a crime at one point.

This strict suppression was later relaxed as the postwar years gave way to the latter half of the twentieth century. For example, at the WJC Plenary Assemblies in 1975 and 1981, the Bulgarian Jewish Community sent observers, as well as at the WJC European Branch meetings. Within the country, Solomon Razanis served on the Bulgarian Supreme Court from 1966 to 1992, and on a more cultural note, a film which showed the deportation of Bulgarian Jews during World War II, The Transports for the Death Camps Have Not Yet Departed, won the “National Front Prize” at the third festival of shorts films held at Plovdiv in 1978.
Such a development is demonstrative of Bulgarian Jewry today. The Jewish community enjoys a sense of stability it has not been afforded in the past, including inclusion in various facets of broader Bulgarian life. Solomon Isaac Passy served as Foreign Minister from 2001 to 2005 and was notable for negotiating and signing Bulgaria’s accession into the European Union and NATO.

On the eve of the Shoah, nearly 50,000 Jews lived in Bulgaria, half of them in Sofia. Recognizing the growing danger for Bulgarian Jewry, a group of Bulgarian Jews attempted to sail away to safety aboard the Salvador, only for a storm to drown a sizeable number of passengers. The survivors made their way to Haifa only for British authorities to arrest them and intern in camps until May 1942.

Steadily institutionalized anti-Semitism continued to grow in Nazi-aligned Bulgaria, and in 1941, the Bulgarian parliament passed the Law on the Protection of the Nation, which introduced numerous legal restrictions on Jews. Specifically, it prohibited them from voting, running for office, working in government positions, serving in the army, marrying or cohabitating with ethnic Bulgarians, using Bulgarian names, or owning rural land. Jewish leaders were not alone in protesting against the law; the Bulgarian Orthodox Church, Bulgarian Workers' Party officials, twenty-one writers, and professional organizations also opposed it.

Bulgarian Jews were saved from deportation to the German death camps largely due to the energetic intervention of non-Jewish Bulgarians, including the clergy, the liberal intelligentsia, and the king. The Jews of Bulgarian-occupied Thrace and Macedonia, however, were stripped of their property and deported by the Bulgarians to German death camps. In the years immediately following the war, about 90 percent of Bulgarian Jewry emigrated to Israel.

Most Jews live in Sofia but there are smaller communities in Plovdiv, Varna, Burgas and Ruse.

Members of the organization can be not only Jewish, but also non-Jewish people, who have some family relation to Jews and share and support the goals and activities of the organization. The membership is voluntary and more details regarding it can be found here.

The organization aims to preserve and develop the Jewish ethnic, linguistic and cultural traditions, to defend the constitutional rights of its members and of all Jews in the country, to oppose any form of fascism, totalitarianism, racism, anti-Semitism and national chauvinism.

The goals of the organization are achieved through studying and popularizing the Jewish history and ethnic traditions, celebrating holidays and anniversaries, organizing artistic events, exhibitions, musical and theatre performances, concerts, promoting books, meetings, symposiums, workshops, etc. The organization “Shalom” publishes the newspaper “Evreiski vesti”, “La Estreya” magazine, books, brochures and other printed editions. The organization makes efforts to maintain the historical heritage – synagogues, graves, monuments, administrates and manages its own property and the property, lent to third parties. It gives social, health and educational benefits, participates in acts of solidarity, charity and social assistance across the country and abroad.

In addition, Jewish organizations such as Maccabi, WIZO, World Jewry, and B’nai B’rith, as well as the state of Israel contribute greatly to the reestablishment of the Bulgarian Jewish Community in Sofia.

The level of religious observance in Bulgaria is low, and many Bulgarian Jews come from mixed marriages. Most Bulgarian Jews identify themselves in a national-ethnic rather than a religious context.

There are only two functioning synagogues in Bulgaria, in Sofia and Plovdiv. Services are held on Shabbat, but most Jews only congregate on important Jewish holidays. Notably, the synagogue in Sofia celebrated of its 100th anniversary in 2009 in the presence of Bulgaria’s president and many Jewish leaders from Europe. The neo-Byzantine shul is one of the largest Sephardic buildings in the world and among the largest synagogues in Europe.
Because of emigration and assimilation, the elderly account for a large share of the population. However, despite the high rate of intermarriage, many children have begun to return to Judaism.

Kosher food is somewhat scare in Bulgaria and is mostly limited to Sofia. There is a Jewish old-age home in Sofia with a kitchen that provides kosher food for elderly people.

Jewish education in Bulgaria has recently experienced a resurgence on both a formal and informal level. In 1991, with the change the Constitution of the Republic of Bulgaria after the adoption of the Law for studying the mother tongue OJB “Shalom” together with partner international Jewish organizations organized Hebrew in 134 “Dimcho Debelyanov” schools in Sofia.

In 1997, The Ronald S. Lauder Foundation became a major sponsor and partner of the Jewish school in Sofia, today the Lauder Ort Jewish Elementary and High School. The Foundation provided repair and renovation of the school building and created modern classrooms for the study of Hebrew. Hebrew teachers are trained and qualified annually and apply modern methods of teaching. The school has received the status of a public school teaching Hebrew as a first foreign language.

Much of the education that members of the Jewish community in Bulgaria receive from outside of formal institutions, is conducted through programs and activities of OJB “Shalom.” Founded on the principles of learning through experience and job sharing the activities of OJB “Shalom” are for the most part experience based. The purpose of the organisation is to educate its members from infancy with the principles of Judaism, Sephardic Jewish traditions and customs of the Jewish life cycle, Jewish holidays and calendar, Jewish communities around the world and everything connected with the Jewish state – Israel.

In terms of secondary education, the Hebrew Scientific Institute was founded in 1947 and has been part of the Bulgarian Academy of Sciences since the 1950s. The Bulgarian Academy Sciences has published numerous works on Jewish subjects, including a collection detailing the economy history of Balkan Jews. Additionally, Jewish secondary and adult education is available through the means of OJB “Shalom.”

Jewish teenagers in Bulgaria can participate in the activities of the local chapters of international movements such as BBYO and Hashomer Hatzair. OJB “Shalom” also offers summer camps for children, seminars about Judaism as well as Jewish songs and dances.

Despite the small size of the community, there are Jewish Bulgarian periodicals and publications. The organization “Shalom” publishes the newspaper “Evreiski vesti”, “La Estreya” magazine, books, brochures and other printed editions. An update on the activities of the community can also be found on “Shalom’s” website.