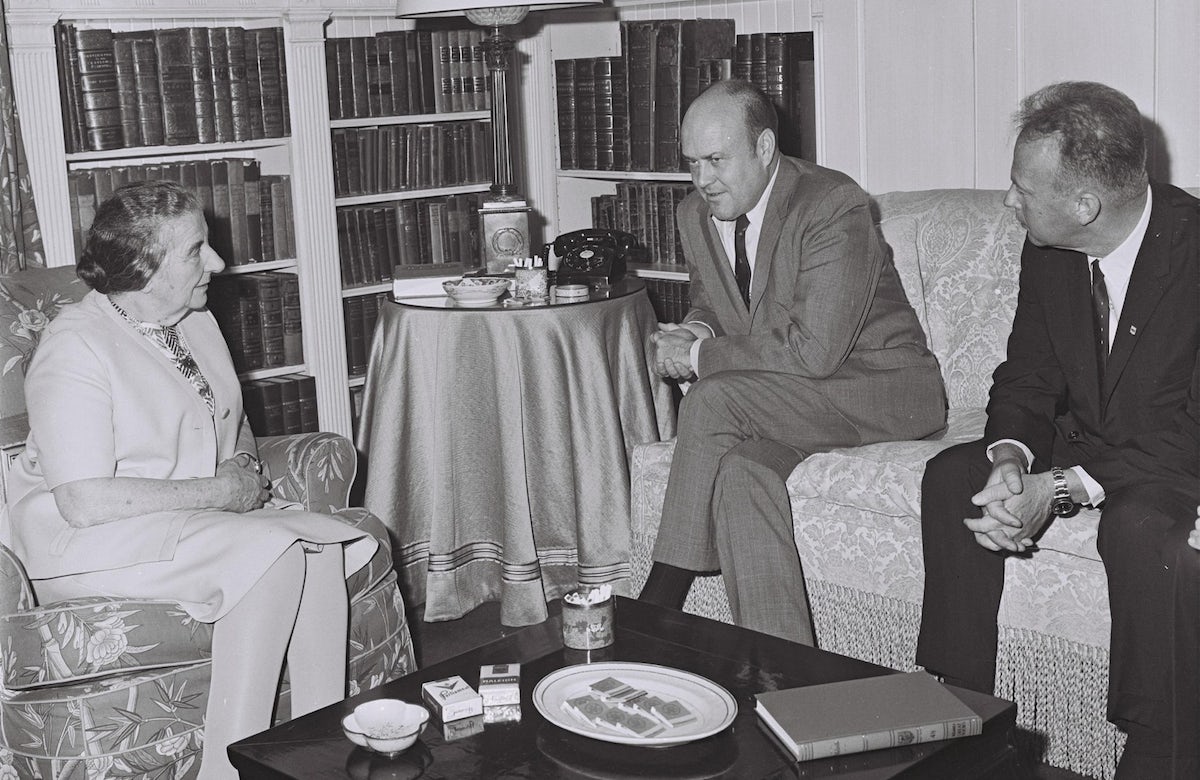 On 8 December 1978, Israel’s only female prime minister, Golda Meir (Mabovitch), passed away at the age of 80.

When she was just eight years old, Meir and her family immigrated from Kiev (Kyiv) to Milwaukee, Wisconsin in 1906. Meir would become active in politics and go on to lead the Milwaukee Labor Zionist Party. In 1921, Meir and her husband, Morris Myerson, immigrated to the British Mandate of Palestine, where they joined Kibbutz Merhavia in the Jezreel Valley. Meir would become a prominent member of the kibbutz, serving as its representative to the Histadrut (General Federation of Labour), the secretary of that organization’s Women’s Labour Council (1928–32), and a member of its executive committee.

In 1946, Meir worked to free several  Jewish activists of the Yishuv that were imprisoned by the British, including future Prime Minister Moshe Sharett, who she replaced at that time as interim head of the Political Department of the Jewish Agency. Following the UN General Assembly’s adoption of the Partition Plan, Meir raised approximately $50 million for the War of Independence, leading Prime Minister David Ben-Gurion to write that Meir was the “Jewish woman who got the money that made the state possible.”

On 14 May 1948, Meir was a signatory to Israel’s Declaration of Independence and would be appointed as Israel's envoy to the Soviet Union a short time later. In 1949, she was elected to the Knesset and served as Minister of Labor and National Insurance from 1949-1956, where she oversaw infrastructure programs, provided subsidized housing for immigrants and orchestrated their integration into the workforce.

In 1956, Meir was appointed foreign minister. In that role, she advocated for strengthening diplomatic ties with African states. In 1966, she became secretary-general of the Mapai Party. Following Israel’s victory in the Six-Day War, Meir oversaw Mapai’s merger with two dissident parties to form the  Israel Labour Party.

Upon the death of Prime Minister Levi Eshkol in 1969, Meir was elected Israel’s first female prime minister, becoming one of the only female heads of governments around the world at that time. She led the State of Israel through several difficult times, including the 1972 Munich Massacre, after which Meir appealed to the world to "save our citizens and condemn the unspeakable criminal acts committed." Outraged by the world's lack of action, she launched Operation “Wrath of God” to track down and neutralize those involved in the massacre.

Meir’s tenure as prime minister is perhaps most remembered for the Yom Kippur War, when Egypt and Syria launched a surprise  attack against Israel on the holiest day of the Jewish calendar. While Israel initially sustained heavy casualties, Israeli soldiers were eventually able to push back the invading armies. Israeli forces crossed the Suez Canal, entrapped the Egyptian Third Army and repelled the Syrians back to Damascus. While Israel would eventually win the war, the victory came at a staggering cost: some 2,680 soldiers lost their lives and many others were seriously wounded

Upon the war’s conclusion, Shimon Agranat, the president of the Israeli Supreme Court, was tasked with investigating the military’s lack of preparation. Although the Agranat Commission absolved Prime Minister Golda Meir and Defense Minister Moshe Dayan of responsibility, the two resigned in 1974 due to widespread public criticism and complaints of glaring intelligence failures.

Affectionately known as the ‘Iron Lady’ and dubbed "the best man in the government" by Ben-Gurion, Meir is often remembered as a "strong-willed, straight-talking, grey-bunned grandmother of the Jewish people." Meir is buried on Mount Herzl in Jerusalem.