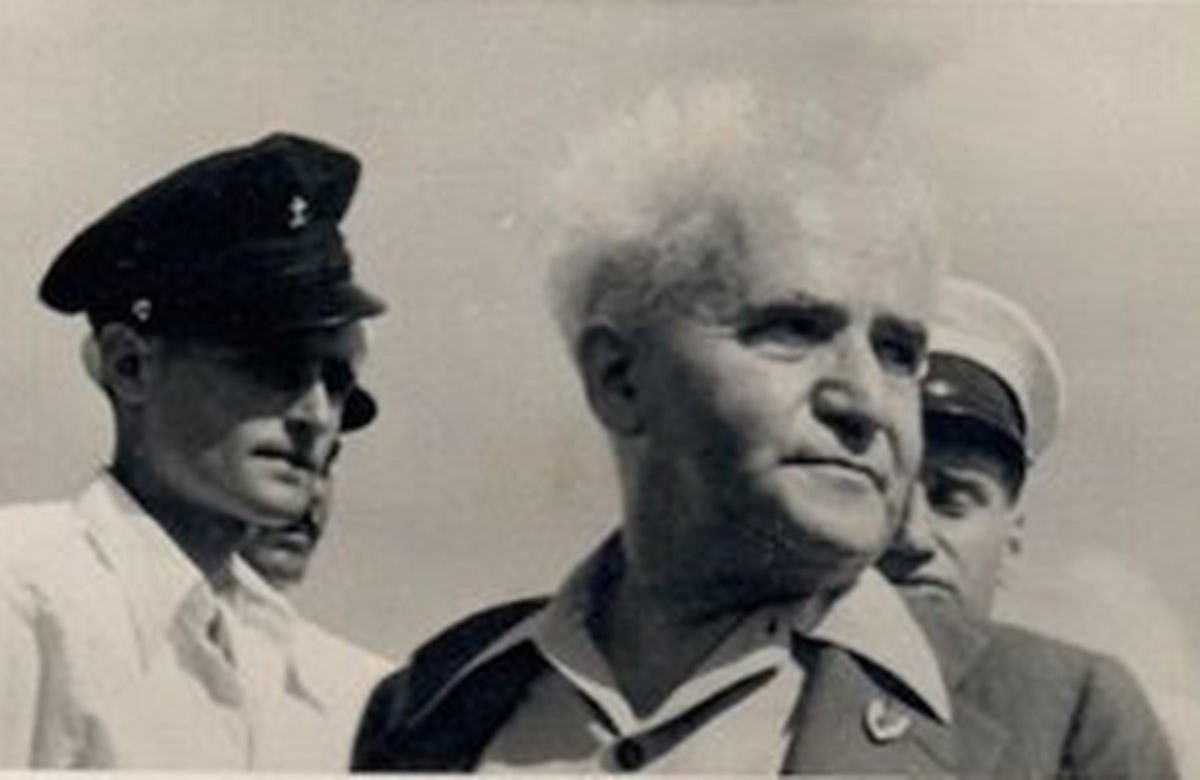 Originally known as David Gruen, Ben-Gurion was born to Victor Gruen, one of the leaders of the Hovevei Zion [Lovers of Zion] movement, which advocated for the Jewish return to the Land of Israel that was a precursor to Zionism. In 1906, a 20-year-old Ben-Gurion moved to Palestine, where he worked on a Jewish agricultural settlement in the coastal plain of Galilee. In the years 1912-1914, together with Yitzhak Ben Zvi, he studied law in Istanbul as a first step toward obtaining a seat in the Ottoman parliament. However, with the outbreak of World War I in 1914, Ben-Gurion was arrested by Turkish authorities for his Zionist activities and expelled from the region.

Ben-Gurion proceeded to travel to New York, where he would eventually marry Paulia Munweis. Following the Balfour Declaration in November 1917, Ben-Gurion enlisted in the British army’s Jewish Legion (by Col. Henry Paterson and Vladimir Jabotinsky) and sailed back to the Middle East to fight for the liberation of Palestine from Turkish control.

After British forces successfully defeated the Turks, Ben-Gurion called for the acceleration of Jewish immigration to Palestine in the effort to create a “Jewish national home,” as the Balfour Declaration had called for. Ben-Gurion founded the Histadrut— a confederation of Jewish workers in Palestine, which quickly became the central organization aiming to attain a “state within a state.”

In 1937, Ben-Gurion reacted with “burning enthusiasm” to the British Peel Commission to divide Palestine into a Jewish and Arab state. However, the plan would be rejected by the Arab High Committee and wouldn’t develop into anything more than a proposal.

To the chagrin of Ben-Gurion and other Jews living in Palestine, in 1939, on the eve of the German invasion of Poland, Britain enacted and implemented a White Paper that severely curtailed the right of Jewish immigration and settlement. Infuriated, on 12 May 1942, Ben-Gurion assembled an emergency meeting with American Zionists in New York City, where it was determined that the Jewish community in Palestine would declare statehood following the conclusion of World War II.

After the war, Ben-Gurion led the Jewish forces into battle against British forces. With the situation in Palestine deteriorating, the United Nations General Assembly voted in favor of the Partition Plan, which was adopted on 14 May 1948 and called for Palestine to be divided into a Jewish state and an Arab state. While the Israelis accepted the resolution, the Palestinian Arabs and surrounding Arab states regarded it as unfavorable to their own populations and rejected it. This led the surrounding Arab countries to invade the nascent State of Israel in November 1948. As prime minister and defense minister, Ben-Gurion successfully led the efforts to fight off the invading Arab armies. Israel would be victorious, but not before sustaining 7,000 casualties.

Over the course of 1949, Israel signed a series of armistice agreements with Egypt (February), Lebanon (March), Jordan (April) and Syria (July). While Iraq did not sign an armistice agreement with Israel, Iraqi forces withdrew from the region in March 1949.

During Ben-Gurion’s first tenure as prime minister, Israel’s population more than doubled and he led Israel through several significant internal conflicts, including the sinking of the Irgun arms ship the Altalena, the eventual coalescing of various Jewish underground groups, and the divisive and controversial Reparations Agreement with West Germany.

Despite Israel being a young country with almost no natural resources, Ben-Gurion’s foreign policy was known for its independence. Throughout his tenure as prime minister, Ben-Gurion would often remark that “what matters is not what the Gentiles will say, but what the Jews will do.”

After two brief periods during which he retired from politics, Ben-Gurion was reelected as prime minister in 1955. During his second stint as prime minister, Ben-Gurion led Israel during the Sinai Campaign, advocated for a stronger response to terrorism and adopted particularly close cooperation with France.

In 1970, Ben-Gurion retired from the Knesset to his cottage in Sde Boker and devoted himself to writing his memoirs, a particularly noteworthy task given his significance in Israeli history and his natural inclination to document historical events. He joked that "anyone who believes you can't change history has never tried to write his memoirs."

Ben-Gurion, who would become known as the “Father of the Nation,” passed away on 1 December 1973 at the age of 87.