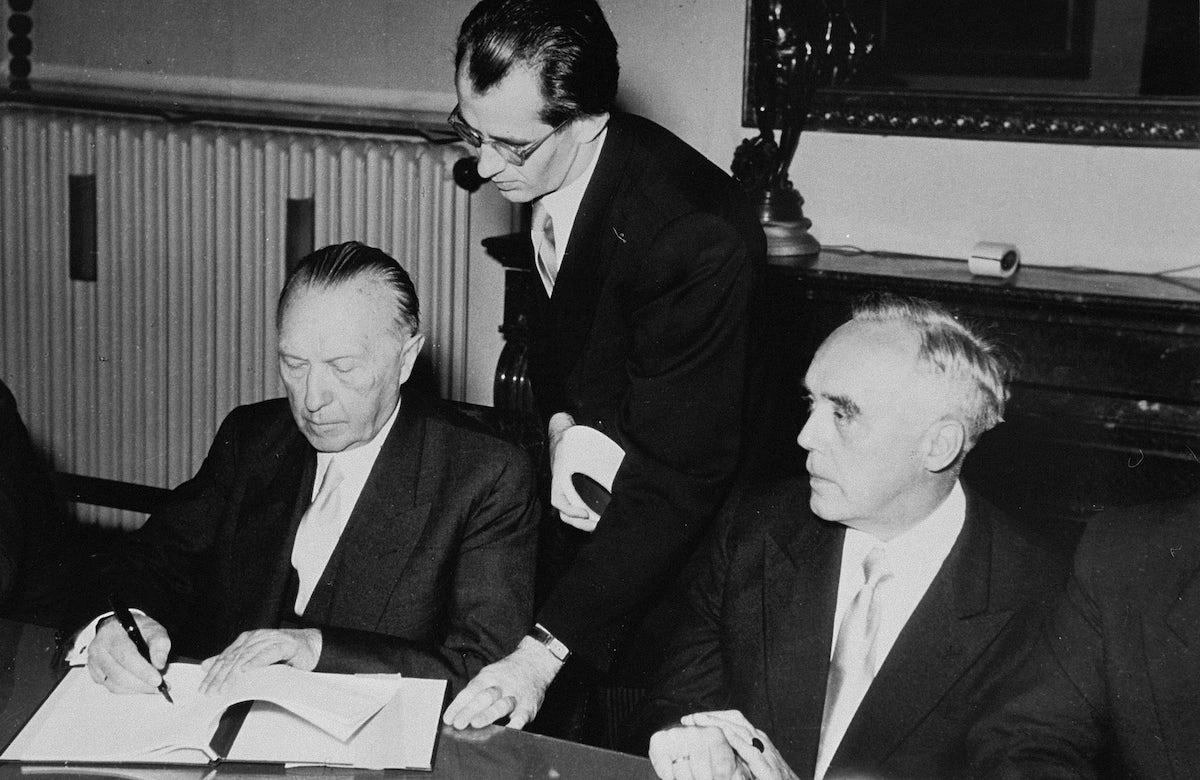 On 10 September 1952, in Luxembourg, Israeli Foreign Minister Moshe Sharett, West German Chancellor Konrad Adenauer, and Dr. Nahum Goldmann signed a series of agreements providing reparations to Israel for the costs of "resettling so great a number of uprooted and destitute Jewish refugees" after the Holocaust, and compensating individual Jews for losses in livelihood and property resulting from Nazi persecution.

The agreements were the result of secret negotiations that followed Adenauer’s landmark 1951 speech signaling West Germany’s readiness to address responsibility for the acts of Nazi Germany culminating in the Holocaust. The Jewish people were represented in the negotiations by the Conference on Material Claims Against Germany (Claims Conference), founded in 1951 by Goldmann, then co-chairman of the Jewish Agency and acting president of the World Jewish Congress.

As Saul Kagan, the founding executive director of the Claims Conference, explained, “For the first time in the history of the Jewish people, we came forward to advance legal and moral claims on the country that had perpetrated crimes against us, in this case the successor state to the Third Reich.”

Under the terms of one of the agreements, West Germany transferred more than $800 million worth of goods to Israel.

The reparations came at a critical time and enabled Israel to develop much-needed modern economic infrastructure and transport systems. While confronting austerity measures and food and fuel shortages, the fast-growing country was now able to revamp the country’s railways and acquire a fleet of merchant and passenger ships.

However, Israel’s agreement to enter into any kind of relationship with Germany only seven years after the end of the Holocaust was highly controversial and polarizing. The ensuing Knesset was the stormiest and most violent in Israel's history, with both socialist and right-wing deputies mercilessly attacking the centrist government. Ya'akov Hazan of the Marxist Mapam Party charged that "[n]egotiations mean recognition of a neo-Nazi Government, managed mostly by ex-Nazis." Thousands of demonstrators protested outside the Knesset and hurled stones through its windows. When the police used tear gas to control the crowd, a Herut Member of Knesset exclaimed, "Gas against the Jews; with that you will win!" Herut Party leader (and future Israeli prime minister) Menachem Begin accused Ben-Gurion of being a "murderer," and was suspended from the Knesset for three months for unruly behavior. In the end, the Israel government obtained Knesset endorsement for direct Israeli-German negotiations by a vote of sixty to fifty-one, with five abstentions and four members absent.