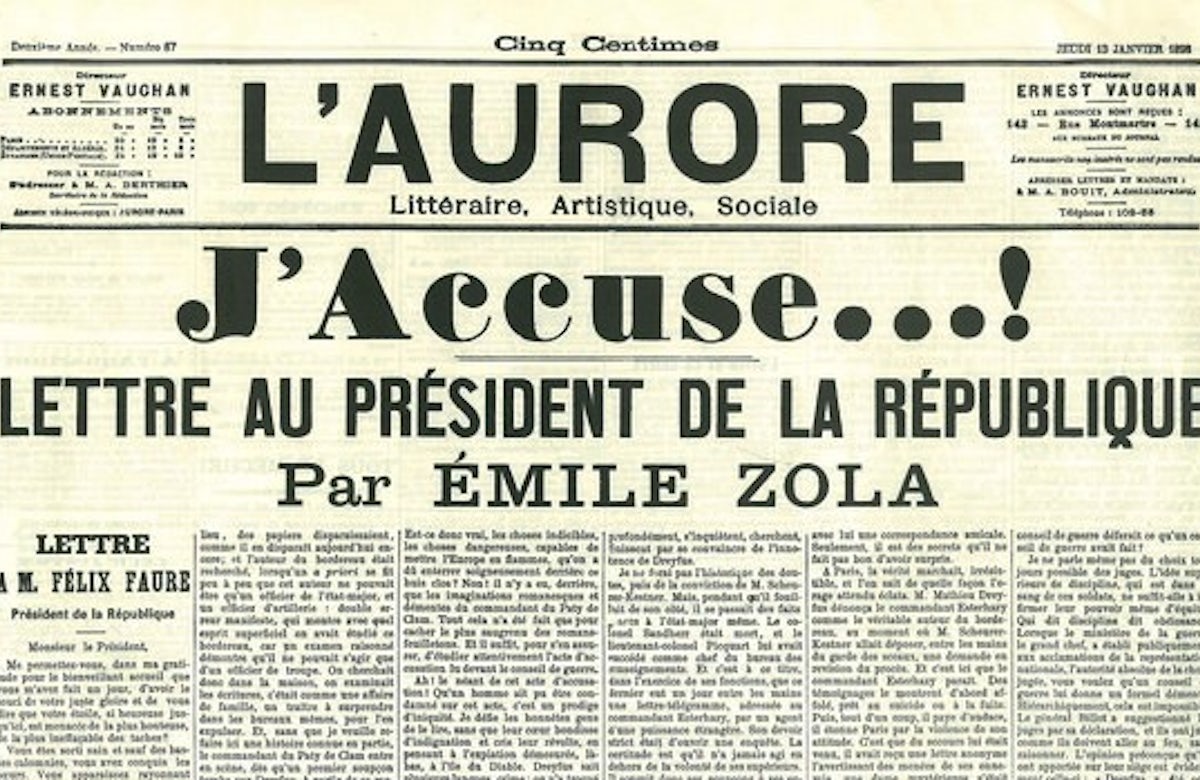 On 13 January 1898, novelist Émile Zola wrote an article accusing the French army of covering up its mistaken conviction of French army captain Alfred Dreyfus for allegedly selling military secrets to the Germans. Dreyfus’ trial and the subsequent events related to it are often referred to as the “Dreyfus Affair,” and noted as a turning point in European Jewish and Zionist history.

Dreyfus, the son of a wealthy Jewish textile manufacturer, was secretly arrested on 15 October 1894, after a French spy in the German embassy in Paris discovered a note addressed to the German military discussing top-secret French military information. When an antisemitic newspaper broke the story of the arrest, it praised his incarceration, calling Dreyfus a traitor and noting his Jewish heritage. Despite the flimsy evidence, the public supported the conviction of Dreyfus, who was sentenced to life imprisonment on a remote island in the South Atlantic.

Approximately four years after Dreyfus’ sentencing, Zola published a 4,000-word open letter to President of France Félix Faureon on the front page of Aurore, under the headline “J’Accuse” [I accuse], in which he maintained that the French government had covered up its mistaken conviction of Dreyfus, had made judicial errors, and had, motivated by antisemitism, illegally jailed Dreyfus. “The conviction of Alfred Dreyfus was based on false accusations of espionage and was a misrepresentation of justice,” Zola wrote.

“The evidence of Dreyfus's character, his affluence, the lack of motive and his continued affirmation of innocence combine to show that he is the victim of the lurid imagination of Major du Paty de Clam, the religious circles surrounding him, and the 'dirty Jew' obsession that is the scourge of our time.”

The article embarrassed the French leadership and divided the country into two camps: the Dreyfusards, who called for Dreyfus’ release, and the anti-Dreyfusards, who often propagated antisemitic conspiracy myths to prove that Dreyfus was a German spy.

Zola was charged with libel and in February 1898 his trial began. Defending himself, Zola declared that the Dreyfus affair was much more significant than Dreyfus himself, saying “There is only one issue: Is France still the France of the Revolution and the Declaration of the Rights of Man, the France which gave the world liberty, and was supposed to give it justice?” After being sentenced to a year in prison and a fine of 3,000 francs, Zola fled to England. He remained in London until June 1899 when he returned to France.

Dreyfus would be pardoned by French President Emile Loube in September 1899. In 1906 the Supreme Court of Appeals officially overturned Dreyfus’ conviction, reinstating him to the army and awarding him the Legion of Honor, albeit four years after Zola had passed away in an incident which some have speculated was caused by people angry at him for his defense of Dreyfus.

The impact of the Dreyfus Affair was felt throughout France and all of Europe. It forced the French people to grapple with the level of antisemitism they would accept in their society.  Eventually, they rejected the baseless hatred by reinstating Dreyfus, whose story remains a cautionary tale concerning the spread of misinformation and conspiracy theories in modern democratic societies.

The antisemitic coverage of the trial by journalist and Dreyfus' conviction was a turning point for future Zionist leader Theodor Herzl, who in February 1896 published his book Der Judenstaat [The Jewish State], which outlined the need for a modern state for the Jewish nation. Several years before he passed away, Herzl convened the first Zionist Congress, which led to significant events including the Second Aliyah, the Balfour Declaration, and the Partition Plan, which culminated in the creation of the modern State of Israel.