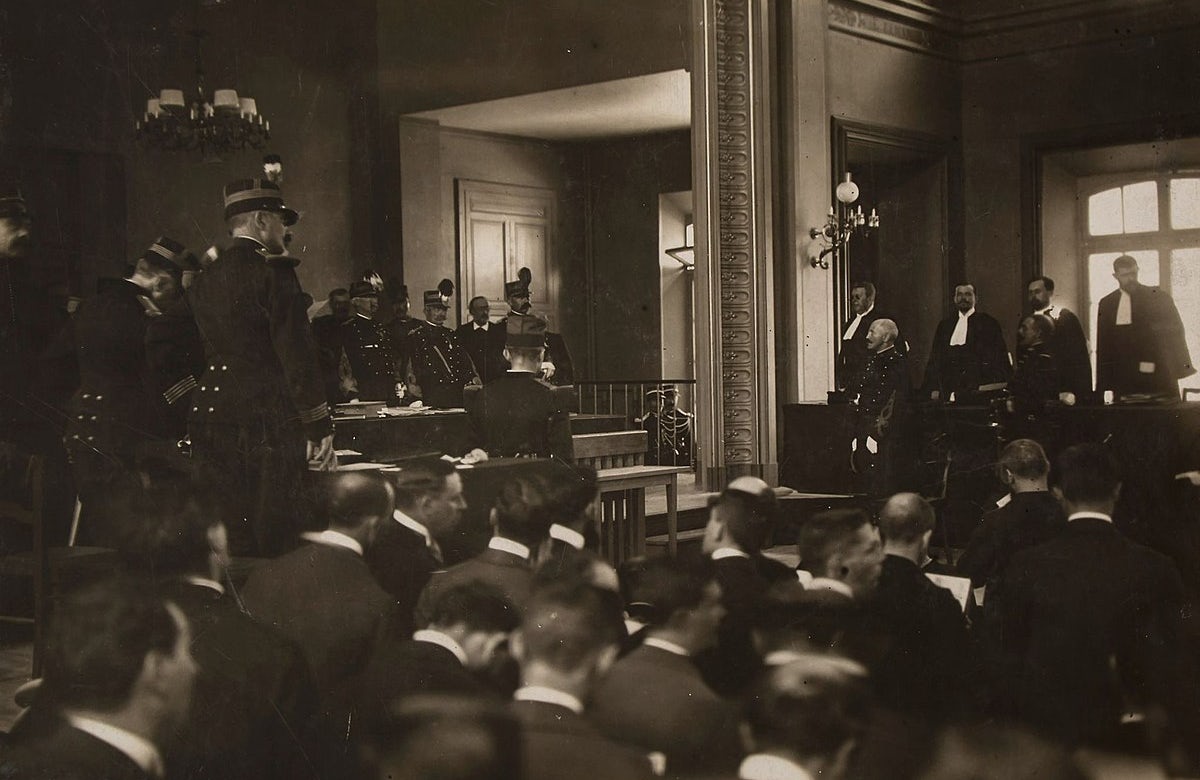 On 22 December 1894, French army captain Alfred Dreyfus was wrongfully sentenced to life imprisonment for allegedly selling military secrets to the Germans. His trial and the subsequent events, which were felt throughout Europe and had a lasting impact on French politics, are often referred to as the “Dreyfus Affair.”

Dreyfus, the son of a wealthy Jewish textile manufacturer, was secretly arrested on 15 October after a French spy in the German embassy in Paris discovered a note addressed to the German military discussing top-secret French military information. The spy proceeded to share the information with French Minister of War General Mercier.

The general assumed the leak of classified information was by an ancillary officer, and after receiving a list of officers, selected Dreyfus, who, unlike the others, was Jewish. To try to prove Dreyfus' guilt, Mercier hired a criminologist who determined that although the handwriting on the leaked memo did not match his handwriting, Dreyfus had intentionally changed his handwriting to ensure that if the documents were discovered, he would not be found guilty.

When an antisemitic newspaper broke the story of the arrest, it praised his incarceration, calling Dreyfus a traitor and noting his Jewish heritage. Despite the flimsy evidence, the public supported Dreyfus’ conviction, which occurred just three days after the tribunal had ended.

The antisemitic coverage of the trial and Dreyfus' conviction was a turning point for future Zionist leader Theodor Herzl, who realized that assimilation would not end antisemitism, as Dreyfus was a high-ranking assimilated French official. In February 1896, Herzl published his book Der Judenstaat [The Jewish State], which outlined the need for a modern state for the Jewish nation.

In March 1896, Lieutenant Colonel Georges Picquart discovered evidence implicating Major Ferdinand Walsin-Esterhazy as the German spy responsible for the leaked military secrets. However, when he brought the evidence to his superiors, he was told the case was closed. While the army attempted to suppress the information, it eventually had no choice but to put Esterhazy on trial after the story and a copy of the memo seeming to implicate Esterhazy was leaked to the press. While Esterhazy would stand trial, he would be acquitted within an hour by a court-martial.

On 13 January 13, 1898, however, novelist Émile Zola wrote an article on the front page of Aurore, under the headline “J’Accuse” [I accuse], accusing the army of covering up its mistaken conviction of Dreyfus. The article embarrassed the French leadership and divided the country into two camps: the Dreyfusards, who called for Dreyfus’ release, and the anti-Dreyfusards, who often propagated antisemitic conspiracy myths to prove that Dreyfus was a German spy.

Following a failed military coup, Dreyfus was retried in 1899. While Dreyfus was again found guilty, French President Emile Loubet pardoned him. In 1906 the Supreme Court of Appeals officially overturned his conviction, after which he was s reinstated to the army and awarded the Legion of Honor.

While Herzl did not live long enough to see Dreyfus reinstated to the army, his life’s work of advocating for a homeland for the Jewish nation was greatly inspired by Dreyfus’ suffering. Several years before he passed away, Herzl convened the first Zionist Congress, which led to several significant events eventually culminating in the creation of the modern State of Israel, including the Second Aliyah, the Balfour Declaration, and the Partition Plan.