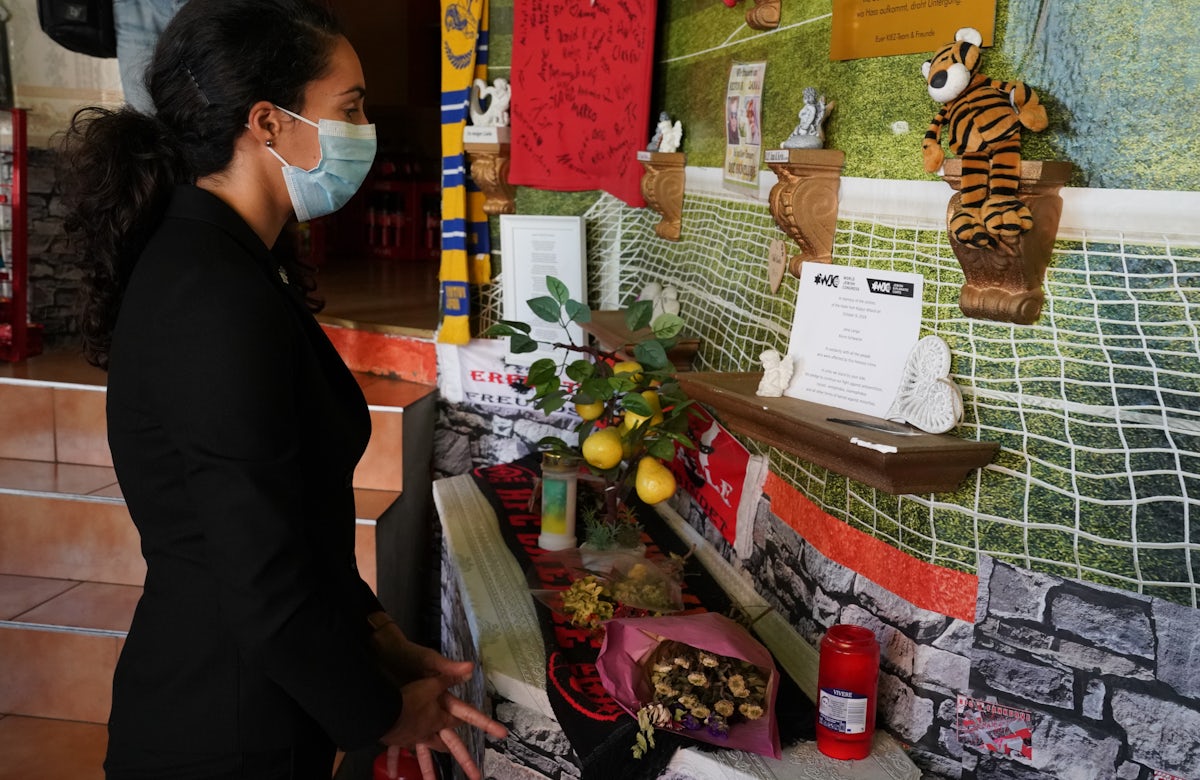 At the Kiez Döner Kebab Restaurant in Halle, Germany, Gila Baumoehl, a member of the World Jewish Congress Jewish Diplomatic Corps, leaves a note and pays respect to the victims of the 2019 Yom Kippur attack in Halle. PHOTO CREDIT: Detlev Schilke / WJC

HALLE, Germany – On Yom Kippur in 2019, the world was shocked and saddened to learn of an unfolding attack by a heavily armed, far-right extremist on the synagogue in Halle, Germany, while worshippers were praying inside. Unable to gain access, the gunman then directed his violence outside. He killed two people, Jana Lange and Kevin Schwarze.

To mark the one-year anniversary of the 2019 Yom Kippur attack on Halle, to mourn the deaths of the victims, and to push for concrete action to fight antisemitism, the World Jewish Congress (WJC) brought together Jewish community and government leaders in Halle for a small, socially distanced event at the synagogue in Halle on the day after Yom Kippur this year. This event came in advance of the October 9 calendar anniversary of the attack.

The full video recording of the event, which was livestreamed publicly, is available online, along with additional information about the attack on Halle last year, and the state of antisemitism in Germany today. Photos, with captions and crediting information, are available in this album.

WJC President Ronald Lauder visited the synagogue soon after the attack last year. He underscored that “action, not words” are needed in the global fight against antisemitism. The same remains critical today, one year later.

Standing on the ‘bimah’ in the synagogue, Dr. Felix Klein, German Federal Commissioner for Jewish Life in Germany and the Fight Against Anti-Semitism, recognized the real danger of right-wing extremism in Germany today, and shared that a German Cabinet committee was recently established to address it, including setting aside 22 million Euro for the protection of Jewish institutions.

“The terrorist attack of Halle is a new quality of crimes,” Klein said. “After the attack, nobody can deny the deadly dimension of anti-Semitism and right-wing extremism in Germany anymore. On the other hand, there is a very sad tradition of antisemitic attacks in Germany. … Right-wing extremism is a big threat to democracy in Germany. The federal government takes this threat very seriously. … But protection is much more than only the protection of buildings. We need to protect the Jewish community in Germany as a whole in a holistic strategy. That means protecting them also in daily life, and that only works when we promote Jewish life in everyday culture. That is at least as important as the fight against hatred.”

Maram Stern, World Jewish Congress Executive Vice President, shared his reaction to the attack after having visited Halle the day after the attack, “It was a shock to see what could have happened if [the attacker] had succeeded in [breaking through the synagogue doors]. It is a shock for me, as a German Jew, who grew up in Berlin after the war and who would have never thought something link this could ever happen again.”

Stern recognized the efforts of German Federal Minister of Interior Horst Seehofer in working to hold European Union member states accountable and developing a stronger shared commitment to what must be a global fight against antisemitism, and said that more action was needed. “Why are the far-right parties still allowed to be as prominent as they are? Why is German politics not able to finish with all this? Something like this should never happen again, in Germany, or any other place.”

Max Privorozki, President of the Jewish Community of Halle, reflected on how this year’s Yom Kippur was different from last year’s. “The most important prayer is Neilah, and last year, it was impossible to pray Neilah because we were all in the hospital or with the police. Yesterday, we prayed Neilah. To pray Neilah on Yom Kippur is the most important thing, and we did it yesterday, and I hope that the future will be better than we had last year.”

In a video message, Dr. Josef Schuster, President of the Central Council of Jews in Germany and WJC Vice President, shared, “The attack on the Jewish community of Halle was possible because the security provided by the State was insufficient. It is a pity that Jewish facilities still have to be protected by the police. My deepest wish is for my children and grandchildren to see the day when such protective measures are no longer needed.”

Raya Kalenova, Executive Vice President of the European Jewish Congress (EJC), described the EJC’s efforts urging the need for increased security for Jewish institutions across Europe. She said the EJC has focused on preparing Jewish communities to face crisis situations.

“All attacks on Jews or Jewish symbols in Germany have, of course, a certain connotation and are particularly painful,” she said. “The Jewish community of Halle knew how to respond to this attack, so that a bigger tragedy could be avoided. Over the last year, the German federal government has fully acknowledged the security gaps, and we greatly welcome the recent pledge made to the Central Council of Jews in Germany to increase the security of synagogues and other communal buildings across the country. We trust that all together, we will be able to stand up against hatred, wherever it comes from.”

More information on the World Jewish Congress’ efforts to combat the alarming rise in global antisemitism can be found here, and its affiliated Jewish communities around the world here.