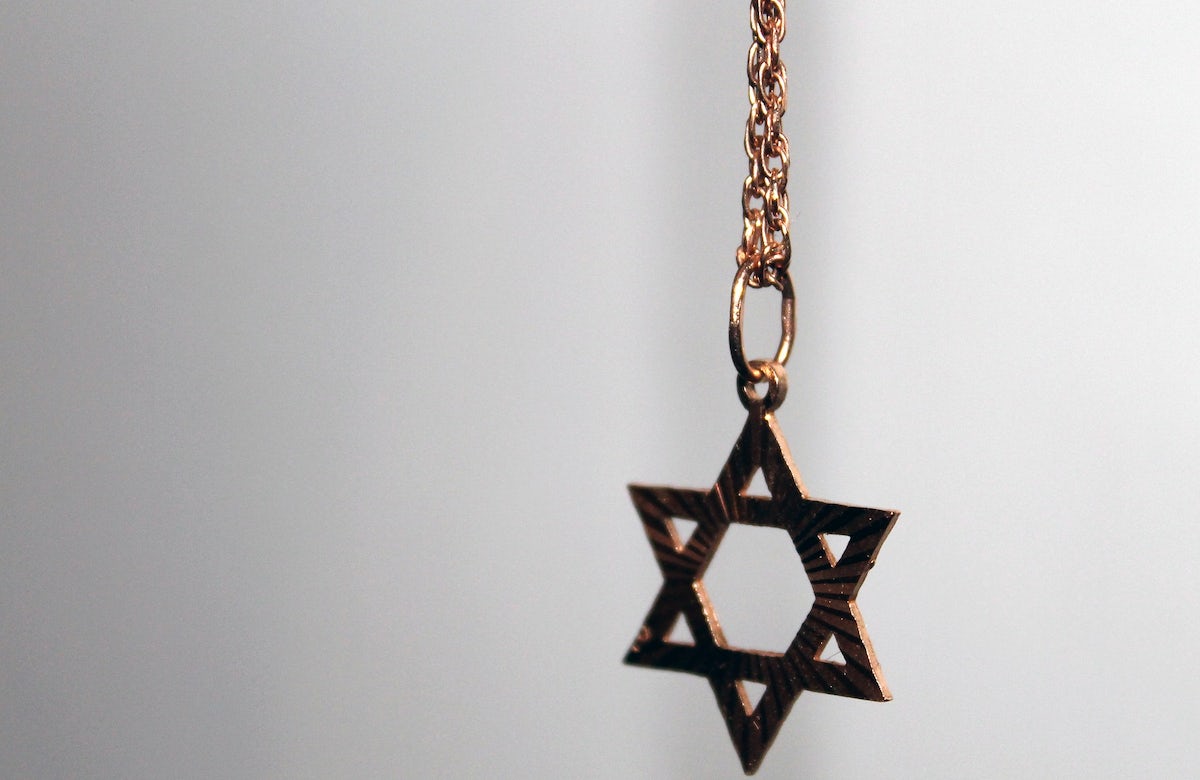 What: An Austrian rapper known as ‘Mr. Bond’ was arrested by Vienna police for broadcasting several neo-Nazi songs, some of which were played during the Halle synagogue shooting. At his residence, police found weapons, a military flag from the Third Reich, a mixing desk, and hard disks. Click here to read more.

Additionally, the entrance of the Lauder Chabad synagogue in Vienna was vandalized with candles, children's shoes, a sanitary napkin smeared with ketchup and garbage.

Jews assaulted outside of synagogue

What: Congregants leaving the Margaret Street Synagogue were punched and spit at by a group screaming antisemitic slogans.

“Nazi salutes, spitting, screaming antisemitic slogans and punching – this is not the behavior anyone expects to witness on the streets of Brisbane,” Steinberg said. “We want Queensland to be a harmonious place where people of all cultures, languages and faiths feel a strong sense of belonging. A rise in antisemitism is a vile threat against this aspiration. All Queenslanders should watch closely for signs within our society that threaten the inclusive communities we all want to live in.” Click here to read more.

What: The home of Belgian Prime Minister Alexander de Croo was desecrated with multiple swastikas. A spokesperson for the Prime Minister, who is not Jewish, said that De Croo “regrets the damage to his private home and especially the fact that people are trying to intimidate his children and family in this way.”

Police are investigating the incident. Click here to read more.

What: This year’s Lukov March, which usually brings  neo-Nazis and fascists from across the European continent to Bulgaria’s capital city, was cancelled  thanks to Sofia Mayor Yordanka Fandakova, Bulgarian Prime Minister Boyko Borisov, the Supreme Administrative Prosecutor's Office, the Ministry of Interior, the Ministry of Foreign Affairs and Deputy Minister of Foreign Affairs and National Antisemitism Coordinator Georg Georgiev.

“On behalf of Jews around the world, the World Jewish Congress greatly appreciates the leadership of Sofia Mayor Yordanka Fandakova and Bulgarian Prime Minister Boyko Borisov, together with local law enforcement, in preserving the peace and repudiating intolerance by refusing to allow the notorious Lukov March to take place. Such gatherings, and all other manifestations and rhetoric that promote and venerate racism, antisemitism, and xenophobia, must be condemned and prevented from spreading their virulent messages of hatred and bigotry. We join the Organization of Jews in Bulgaria, Shalom, in expressing our sincere gratitude for the Bulgarian institutions’ definitive actions against intolerance and hate speech, which set a strong precedent so that this and similar glorifications of evil will not be permitted to rear their ugly heads in Bulgaria in the future.” Click here to read more.

What: Canadian authorities arrested a woman on six counts of property damage in connection with a spate of antisemitic graffiti in the downtown area of London, Ontario.

“The type of damage included antisemitic symbols as well as other images and writings,” police confirmed in a statement.

“We are disheartened to see these acts of property damage, particularly given the symbolism behind the hateful images,” said Police Chief Steve Williams. “We will continue to investigate all calls of this nature, and apply charges as appropriate.” Click here to read more.

What: Jewish-French lawmaker Yaël Braun-Pivet of the LREM centrist party received hate mail telling her to “get ready for the camps.”

In addition to referencing Nazi death camps, the author wrote: “This time, it’s the Muslims who will deal with you.” Also, “Jews can no longer come into some neighborhoods. Within two generations it will be whole cities. Demography determines laws.” Click here to read more.

In a separate incident, a Jewish police officer in France discovered swastikas and the words “dirty Jew” on his locker at his police precinct. The incident is the subject of an internal probe.

Sammy Ghozlan, the founder of National Bureau for Vigilance Against Antisemitism, a Jewish community watchdog, told Le Parisien  that the incident was “extremely serious,” as it undermines the Jewish community’s trust in the police.” he “Police officers are entrusted with protecting citizens in the fight against all forms of racism and antisemitism,” he said.

On the fifteenth anniversary of the kidnapping and murder of Ilan Halimi, the Representative Council of Jewish Institutions in France (CRIF), commissioned a survey on the state of antisemitism in France. Among several finding were that 38% of French people are unaware of the concept of anti-Zionism.

What: Antisemitic crimes continued their upward trend in Germany in 2020 with 2,275 crimes, according to a report published by the German government. Around 55 of the hate crimes were violent crimes.

"In view of the numerous antisemitic incidents at the coronavirus-denier protests last year and the conspiracy myths online, it was, unfortunately, to be expected that the number of antisemitic crimes would rise again," said Central Council of Jews in Germany President Josef Schuster.

The federal government's Anti-Ssemitism Commissioner Felix Klein said that the new figures "must be a warning to us,." adding He added that it is a “clear sign that democracy must show itself to be defensible, especially in crises like the ongoing pandemic." Click here to read more.

Antisemitic flyers were found on a tram in Cologne, Germany, blaming Jews for the ongoing pandemic. The black-and-white flyer reads: “Do we really have a Corona problem? Or do we have a Jewish problem...The more Jews in politics and media, the worse things are!” i A Star of David appears in the background next to the names of three prominent German politicians — Chancellor Angela Merkel, Health Minister Jens Spahn, Minister of Foreign Affairs Heiko Maas — and virologist Christian Drosten. While none of the featured politicians is Jewish, the flyer claims they are.

A former member of an elite German university fraternity alleged that members regularly greeted each other with the words “Heil Hitler” and used the word “Jew” as a pejorative. The fraternity, Normannia, is under investigation by authorities following an incident at a party at which a 25-year-old student in attendance alleged he was berated with antisemitic abuse, whipped with belts and pelted with metal coins by several assailants.

Where: Maastricht, the Netherlands

What: A swastika was carved into the doorframe of a Jewish student’s house in Maastricht. The student’s Mezuzah was also torn off. Antisemitic incidents reached a record high in the Netherlands in 2019, according to a report published by the Center for Information and Documentation on Israel (CIDI), an organization that has monitored antisemitism in the Netherlands for nearly 30 years.

What: Vasile Zarnescu, 74, a former colonel who worked for the Romanian Intelligence Service for 11 years, was sentenced to 13 months in prison for writing online articles describing the Holocaust as a “fraud.”

“It is the first conviction for Holocaust denial and it is a strong message from the legal system, one that shows significant progress,” said Alexandru Muraru, Romania’s recently appointed special government envoy for the fight against antisemitism and xenophobia. “The case is interesting because we are not talking about just anyone, but about a former member of the Romanian Intelligence Service.” Click here to read more.

What: Approximately 300 people marched in Madrid to honor the Spanish forces that fought alongside Hitler in World War II. During the citywide march, a woman exclaimed, “The enemy will always be the same, although with different masks: the Jew. […] The Jew is the culprit... “

In response to the accusations, the Federation of Jewish Communities of Spain (FCJE) stated, “We consider it unacceptable that in a solid democracy under the rule of law such as Spain, such remarks go unpunished. That is why we demand that the Office of the Prosecutor for Hate Crimes investigate this incident and, where appropriate, prosecute and condemn these criminal acts.”

In a statement released on Twitter, Osoro denounced the incident as “intolerable,” and called for an “end of all violence and any religious persecution.” Click here to read more.

What: In the third incident motivated by antisemitism in Switzerland this month, anti-Jewish symbols and slogans, including "Sieg Heil" and "Juden Pack," were found carved into the door of the Bienne Synagogue in the city of Biel on Thursday. Authorities are investigating the situation.

In a statement announcing plans to file a criminal complaint, the WJC-affiliated Swiss Federation of Jewish Communities (SIG-FSCI) described the incident as “a massive desecration of the synagogue and a grave antisemitic incident.”

The incident occurred less than two weeks after criminal charges were filed in response to pork that was left, seemingly intentionally, in front of the two separate synagogues in Switzerland. The SIG-FSCI said that the “attack is not just in bad taste, but a deliberate attempt to symbolically desecrate or desecrate a synagogue.”

While the perpetrators have yet to be apprehended, it is known that far-right activists in Europe place pork as a sign of hatred and insult in front of mosques, and more rarely at synagogues, as pigs are neither Halal nor kosher in Muslim and Jewish traditions, respectively. Click here to read more.

What:  British Jewry’s main security unit, Community Security Trust, recorded 1,668 antisemitic incidents in 2020 – an 8% drop from 2019. Nevertheless, the number was among the top three highest tallies ever.

A UK court sentenced a 16-year-old who fantasized about “gassing” Jews, hanging gay people and “shoot[ing] up their parades,” to two years in a youth rehabilitation center. The defendant, who became the country’s youngest terror convict, pleaded guilty last week to 10 counts of possessing terrorist material and two counts of disseminating terror documents.

A Holocaust survivor and her son were reportedly physically and verbally assaulted on a London bus. According to the watch group Shomrim, a female punched the 80-year-old and her son in the head while screaming: “I hate you Jews. It’s not your place; you took our money.”

In a similar incident, an unmasked was filmed screaming at Charedi passengers on a north London bus, saying, "You think can come over here and f**k with us English people.” Hackney Superintendent Andy Port  responded, “We take all forms of hate crime seriously, whether it be a crime based on a person’s race, religion, sexual orientation, disability or prejudice against a person who is transgender. We deplore any form or hate crime and will do everything in our power to bring to justice those responsible.”

What: Police in California are investigating an incident in which a Jewish fraternity, Alpha Epsilon Pi, at the California Polytechnic State University, found swastikas and  antisemitic graffiti painted outside its house.

“We awoke to multiple swastikas and antisemitic statements spray-painted on and in front of our house,” Alpha Epsilon Pi wrote in an Instagram post on Saturday.

“Let us be perfectly clear: Behavior that promotes any form of hate and seeks to make members of our community feel unsafe and unwelcome – especially in their own home – has absolutely no place in our community,” said University President Jeffrey Armstrong. Click here to read more.

In a similar incidents, a bearded man scrawled a swastika outside a historic Upper East Side synagogue in New York and a swastika  was discovered etched on the outside of the building of Temple Beth Torah, a Reform synagogue in California.