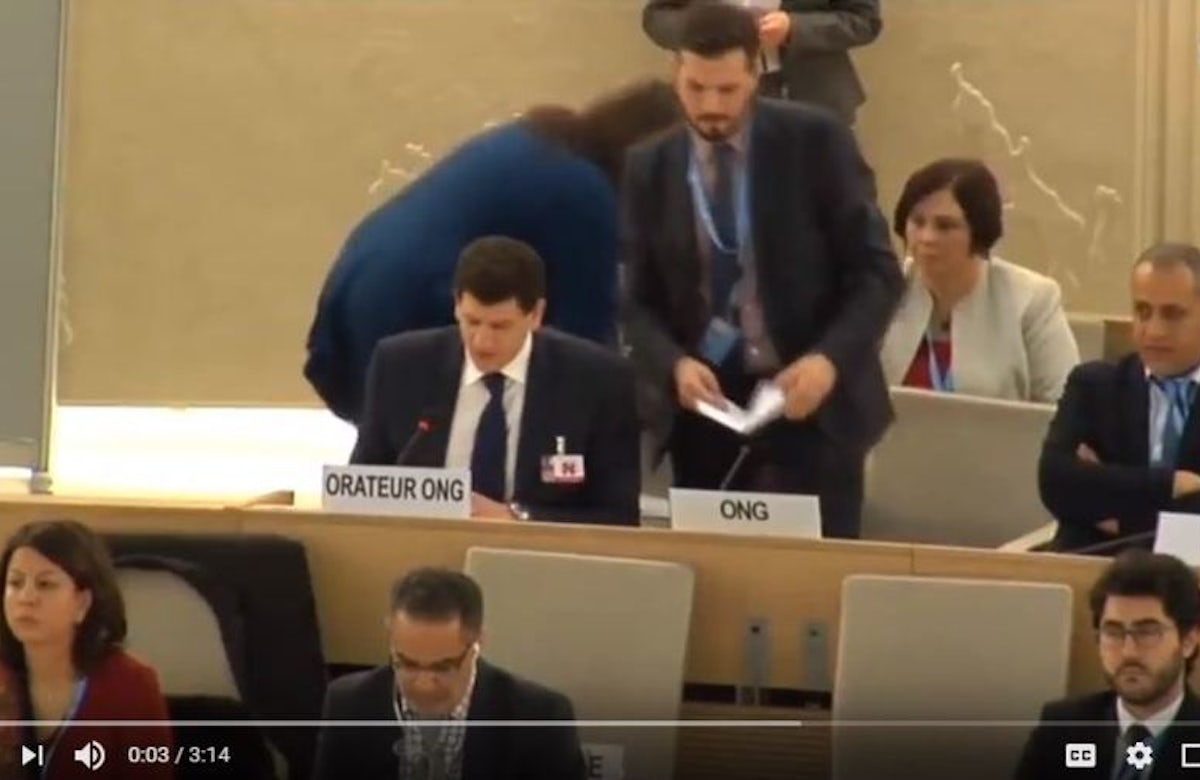 During remarks made to the United Nations Human Rights Council, WJC Jewish Diplomatic Corps member Steven Altmann-Richer called out the body for its release of an anti-Israel report issued by the UN’s Special Rapporteur on the situation of human rights in the Palestinian Territory occupied since 1967 Michael Lynk, a Canadian law professor. Lynk has a long history of making anti-Israel statements, including calling for Israel to prosecuted for "war crimes" and accusing the Jewish state of "ethnic cleansing".

Altmann-Richter's address, which expressed alarm at the absence of any mention of Palestinian human rights abuses within the report, was quickly interrupted by the Palestinian delegation to the UN.

Despite the PA attempt to silence Altmann-Richer, the session's chair intervened allowing him to proceed while noting that there should be no personal attacks directed at the Special Rapporteur.

You may read the full text of WJC JDCorps Member Steven Altmann-Richer statement below:

We are, once again, baffled as to how the Special Rapporteur can be considered an honest broker by this Council, when his report barely shines any light on the daily human rights abuses committed by the Palestinians, including Hamas terrorists in Gaza.

This is clearly evidenced by the way in which the Special Rapporteur assesses the health situation in Gaza in his report, without barely a mention of the responsibility of the Palestinian Authority or Hamas. The Special Rapporteur cannot continue to hide behind his biased mandate as a justification for downplaying the responsibilities of these stakeholders in the dire situation in Gaza.

Indeed, Hamas routinely endangers their own population by using hospitals as storehouses for weapons. They even launch rockets – with the aim of killing Israeli civilians – from hospital roofs. This constitutes collective use of the most vulnerable civilians as human shields, clearly contravening international law.

Must we remind the Council that, without fail, Israel is one of first countries to provide disaster relief when another country is in need, as witnessed with the recent earthquake in Papua New Guinea. Israel’s emergency field hospital was ranked best in the world by the World Health Organisation in 2016 and is regularly deployed to help people in need, wherever they are.

Israel is also the only country where children in hospital for more than three days have to, by law, receive education. In 2015, a photo exhibition brought to the HRC by the World Jewish Congress highlighted how Israel continues to provide education for all hospitalized children - regardless of their gender or ethno-religious background – including Palestinian children from Gaza and Syrian refugees.

Furthermore, despite security risks, tens of thousands of Palestinians from the West Bank and Gaza receive hospital treatment in Israel.

We therefore urge the Council to cease its vilification of Israel. As we have stated many times, this relentless focus on the world’s only Jewish state undermines its credibility.