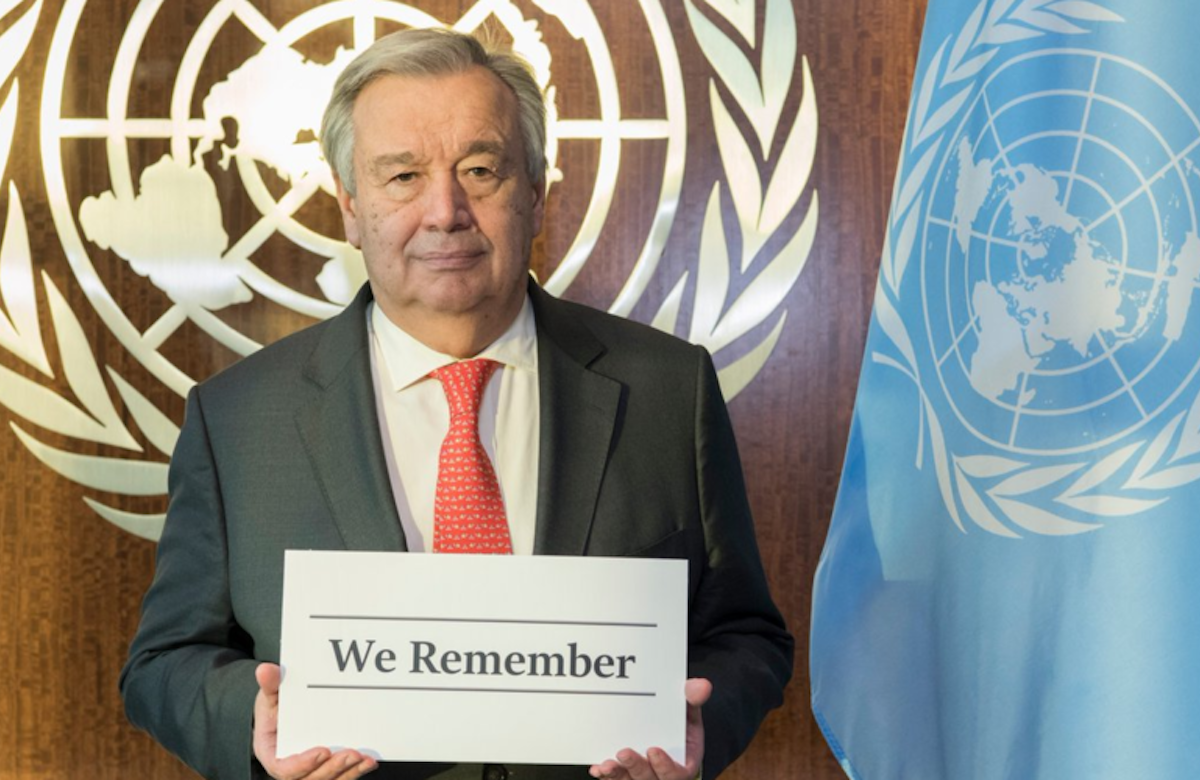 NEW YORK – United Nations Secretary General Antonio Guterres on Thursday joined more than 1.2 million people, including US Ambassador the the UN Nikki Haley and dozens of ambassadors from around the world, taking part in the World Jewish Congress’ We Remember campaign, a social media initiative to combat anti-Semitism and all forms of hatred, genocide and xenophobia, and the largest Holocaust commemoration event in the world. 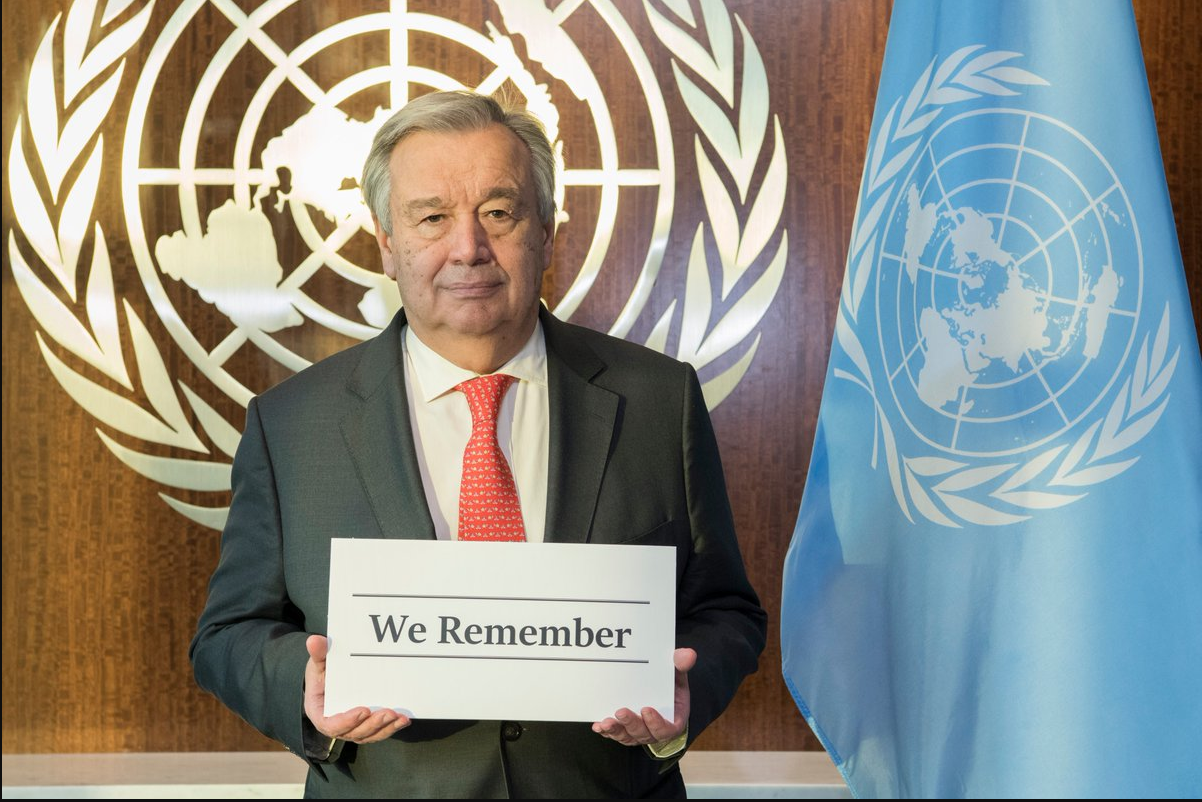 Guterres posted a photo of himself holding a ‘We Remember’ sign to his official Twitter account, holding a We Remember sign, and wrote: “Let us stand against all forms of hatred and discrimination. Let us work together to build a world of pluralism, mutual respect and coexistence for all. #WeRemember.”

World Jewish Congress President Ronald S. Lauder said: “Around the world today, anti-Semitism, Holocaust denial, and hatred of others continue to rear their ugly heads. We must remember because there are fewer and fewer survivors among us, and within just a few decades, all will have passed. We must remember because ‘never again’ seems to happen again and again. It is now the responsibility of the younger generation to teach their friends about the horrors of hatred, and to spread the message that never again must mean never again.”

As part of the campaign, which launched on January 8, the WJC has reached out to millions of people across the world to photograph themselves holding a #WeRemember sign, and post the image to social media, to help spread the message as widely as possible. In addition to Guterres and US Ambassador Haley, participants include heads of state, diplomats, celebrities, and average people from around the world: Croatian President Kolinda Grabar-Kitarović, Estonian President Kersti Kaljulaid, First Minister of Scotland Nicola Sturgeon, German Foreign Minister Sigmar Gabriel and Justice Minister Heiko Maas, Russian Foreign Minister Sergei Lavrov, New York Attorney General Eric Schneiderman, the Massachusetts State Legislature, First Lady Melania Trump, US Congressmen, prominent football teams from Israel and Europe, including the entire Chelsea Football Club and its owner Roman Abramovich, New England Patriots owner Robert Kraft, as well as Bayern Munich. 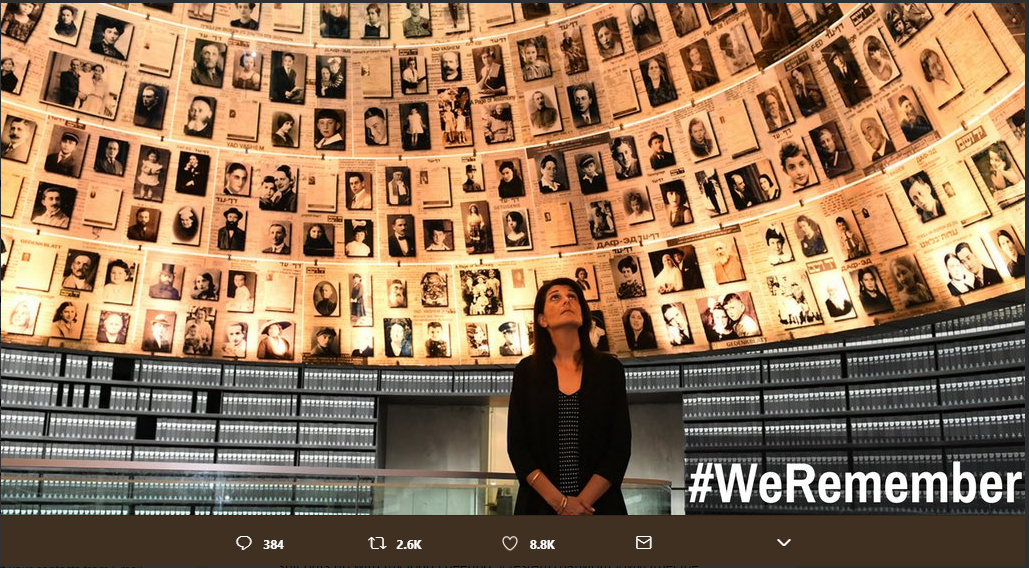 Additonal participants included representatives of different religions including the head of the German Evangelical Church Bishop Heinrich Bedford-Strohm and the head of the All India Imam Association, ambassadors from Peru, Chile, Australia, Hungary, India, Slovenia, Azerbaijan, Malta, and Armenia, among others, actress Mayim Bialik, congressmen, academics, and more. The CEOs of Volkswagon, Siemens, and BMW, three German companies that collaborated with the Nazis during World War II, have also posted their photos and shared the message against anti-Semitism.

More than 250 million people have been reached via social media, media and physical activities. More than 1.2 million people have participated in various ways, by posting WeRemember signs, sharing and actively supporting the campaign on social media, and posting content about the Holocaust with the WeRemember hashtag. The campaign is currently active in 50 countries, and in 24 languages, including Chinese and Arabic, and is being carried out with the support of more than 70 partner organizations, including Chelsea FC, UNESCO, El Al, Magen David Adom, and more. 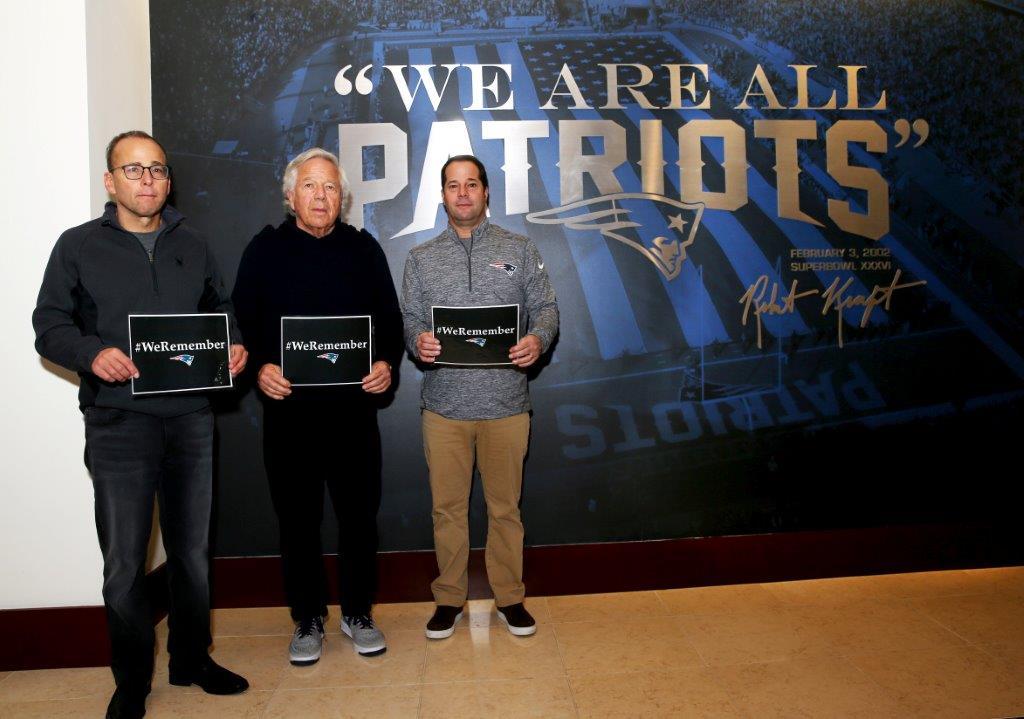 The campaign will run through International Holocaust Remembrance Day on Saturday; participant photos will stream live through January 27 on a projection screen on the grounds of Auschwitz-Birkenau. Follow the projection here: https://www.youtube.com/watch?v=COeUYMwff3Q.

World Jewish Congress CEO Robert Singer said: "In today’s digital age, social media is the only tool that can allow us to connect the world together with this critical message, reaching out to the younger generation in a language and platform they use. The value of having prominent role models taking part in addressing this crucial issue cannot be overstated. The initiative has already far exceeded our expectations, becoming a movement rather than just a campaign. We Remember is above all about education, about reminding the world that unless we remember, these horrors can happen again."