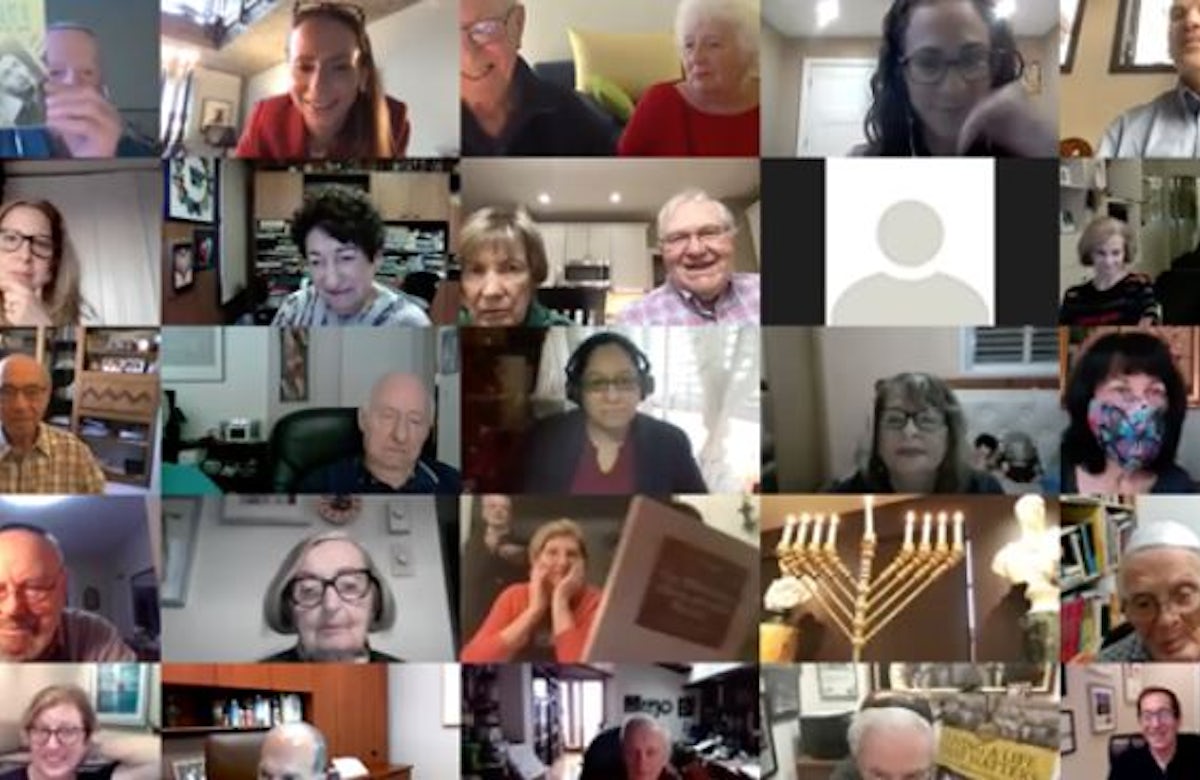 This particular group of Survivors, most of whom met for the very first time in Poland in January 2020, has grown close during the pandemic, connecting over Zoom to talk about the challenges of life amidst the crisis, and to celebrate happy news of birthdays and engagements.

Since the beginning of the coronavirus pandemic, Ambassador Lauder has hosted four online reunions organized by the Auschwitz-Birkenau Memorial Foundation: a Passover celebration, a July virtual meeting, which celebrated the engagement of survivor David Marks and his fiancee Kathy Peck, a High Holidays Zoom reunion, and -- this week -- a Hanukkah candle lighting.

The Hanukkah online meeting was joined by Survivors from the United States, Canada, Germany, the United Kingdom, Austria, Sweden, Israel, and Australia. Most of the Survivors joined the conversation alongside their children and grandchildren, thus ensuring that the community bond extends to the second and third generation, and the transmission of Holocaust memory continues from generation to generation.

Ambassador Lauder opened up the Hanukkah Zoom call by acknowledging how different the Festival of Lights is this year:

“Happy Hanukkah! I am so happy that we are all together today and I must tell you: I did not want to miss this. I know it’s been a very hard year for many of you: some of you are alone, some of you cannot see your families as often as you would want to. We have also lost many survivors to this pandemic. This virus is terrible, but we will survive. There is a light at the end of the tunnel. That is why reunions like this one today are so important. That is why it was very important to me that we come together as a community and light the Hanukkah candles together.”

Amb. Lauder suggested that survivors share their menorahs in front of their screens, as they together recited the blessings and lit the candles:

“Not only is Hanukkah the celebration of the miracle of a small jug of oil lasting for eight nights, but it is also a celebration of all miracles, past, present, and future. Tonight is the Eighth and final Night of Hanukkah. Let’s recite the blessings together and kindle eight lights in the menorah.”

The occasion also marked the birthdays of three Survivors who participated in the delegation earlier this year: Eva Umlauf (78), Angela Orosz Richt (76), and Eva Kerenyi (89). Emphasizing the celebratory nature of the gathering, Ambassador Lauder extended his birthday wishes to the survivors, two of whom were present during the gathering:

“It is with the greatest pleasure that I wish the three of you a hearty Mazel Tov on the occasion of your birthdays. It is not just that you are survivors of the Shoah … it is what you have done with your life since then. You have made it your personal responsibility to educate people about the horrors of the Holocaust so that the Jewish people and all people never experience this again. Thank you and happy birthday! Mazel Tov!”

The Zoom reunion ended with Survivors sharing the books they have written about the Holocaust and their survival, including Ben Lesser’s Living A Life That Matters: from Nazi Nightmare to American Dream, Rose Schindler’s Two Who Survived: Keeping Hope Alive While Surviving the Holocaust, Michael Bornstein’s Survivors Club: The True Story of a Very Young Prisoner of Auschwitz, and Gabriella Karin’s Trauma, Memory, and the Art of Survival: A Holocaust Memoir.

Many Survivors present on the call expressed their gratitude to Ambassador Lauder for his support during this difficult time. Echoing this sentiment, Amb. Lauder thanked attendees for keeping in touch and shared his wishes with the Survivors and their families: “I am wishing you and your families peace and light this holiday season. May we all be blessed with good health, happiness and wisdom.”