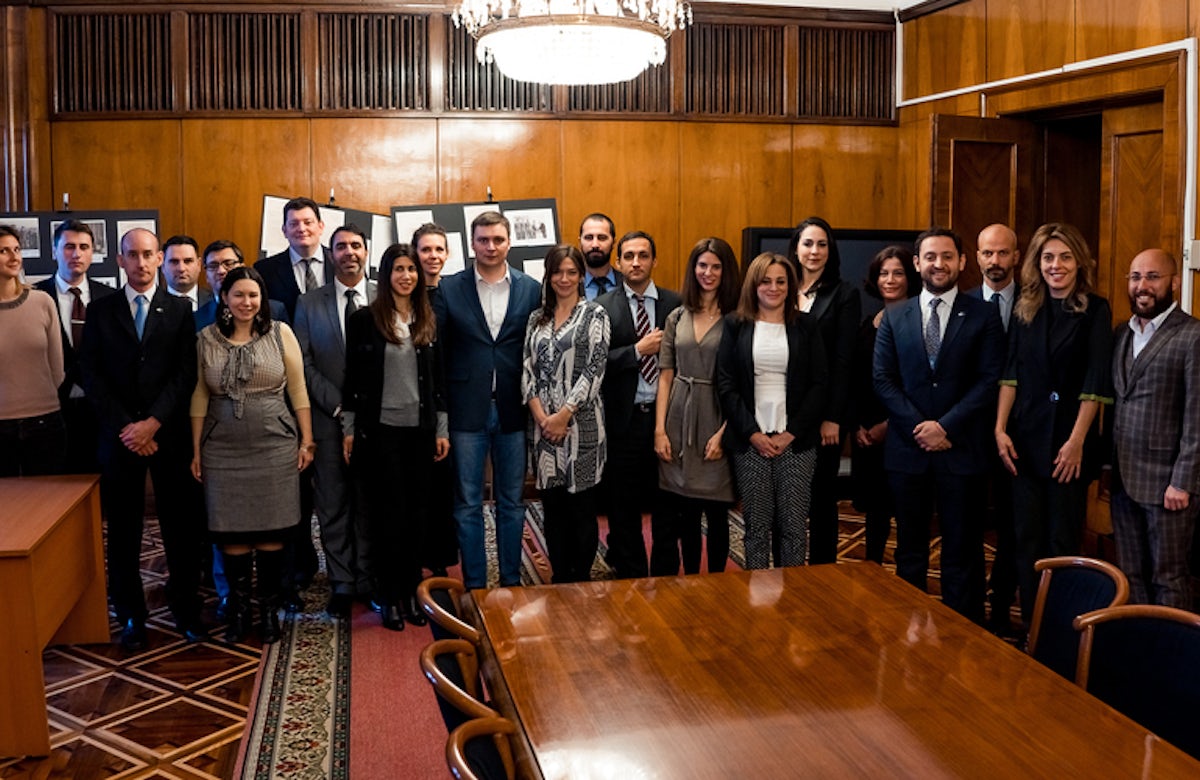 Moscow – The delegation of 47 members the World Jewish Congress Jewish Diplomatic Corps conducted diplomatic meetings at the Russian Ministry of Foreign Affairs and at 9 embassies throughout Moscow on Wednesday, October 31st.

A delegation of 20 WJC Jewish Diplomats was hosted at the Russian Ministry of Foreign Affairs to meet with Konstantin Kolpakov, Head of the Council of Young Diplomats at the MFA. Among the topics discussed were Russia’s role in combating anti-Semitism on the world stage, Russia-Israel bilateral relations, Russia as a player in the Middle East, and Russia in the United Nations. Mr. Kolpakov expressed serious interest in having a follow-up meeting with the WJC Jewish Diplomatic Corps to discuss these issues in further detail.

Argentina: WJC Jewish Diplomats Caroline Berdugo (France), Mathieu Vallens (France) and Andrés Popritkin (Argentina) were received at the Embassy of Argentina by Ambassador Ricardo Lagorio, Deputy Chief of Mission Rolando Pocoví and Embassy Secretary Franco Ruggiero, with whom they had a pleasant meeting and discussed the possibility of working together on Interfaith Dialogue.

Sweden: WJC Jewish Diplomatic Corps Coordinator Gabriel Rosenberg (Sweden/Israel) with WJC Jewish Diplomats Irina Rosensaft (Germany) and Olga B. Karasik (Russia) at the Swedish Embassy in Moscow met with the Deputy Head of Mission Tobias Lorentzson to advocate for enhanced security of the Jewish community in Sweden and for improving the bilateral ties with Israel.

The Netherlands: WJC Jewish Diplomats David Suurland (Netherlands) and Caroline R. Culliere (France), and WJC Coordinator for Combating anti-Semitism Igor Ujhazi with the Dutch Ambassador to Russia to discuss ways of safeguarding international institutes from becoming instruments of undemocratic countries. The integrity of the international legal order is paramount to the interest of the Netherlands and the WJC alike.

Singapore: WJC Jewish Diplomats David Lanes (China), Jonathan Aiach (UK) and Yoni Rahamim (Singapore) at the Embassy of Singapore in Russia.  They were warmly received by Mr. Seah Seow Chen, the Deputy Chief of Mission of the Singapore Embassy in Moscow.  The meeting was constructive, interesting and a commitment was made to stay in contact in order to advance various issues advocated by the WJC Jewish Diplomatic Corp.

The United Kingdom: WJC Jewish Diplomats from the UK Daniel Berke, Efrat Sopher, Jonathan Aiach, and Yoni Rahamim (Singapore) with the UK’s Deputy Chief of Mission to Russia Elizabeth Webb. They discussed the work of the WJC Jewish Diplomatic Corps and raised the importance of countries adopting the IHRA working definition on anti-Semitism and thanked Britain for doing so and for its support of Israel at the UN.