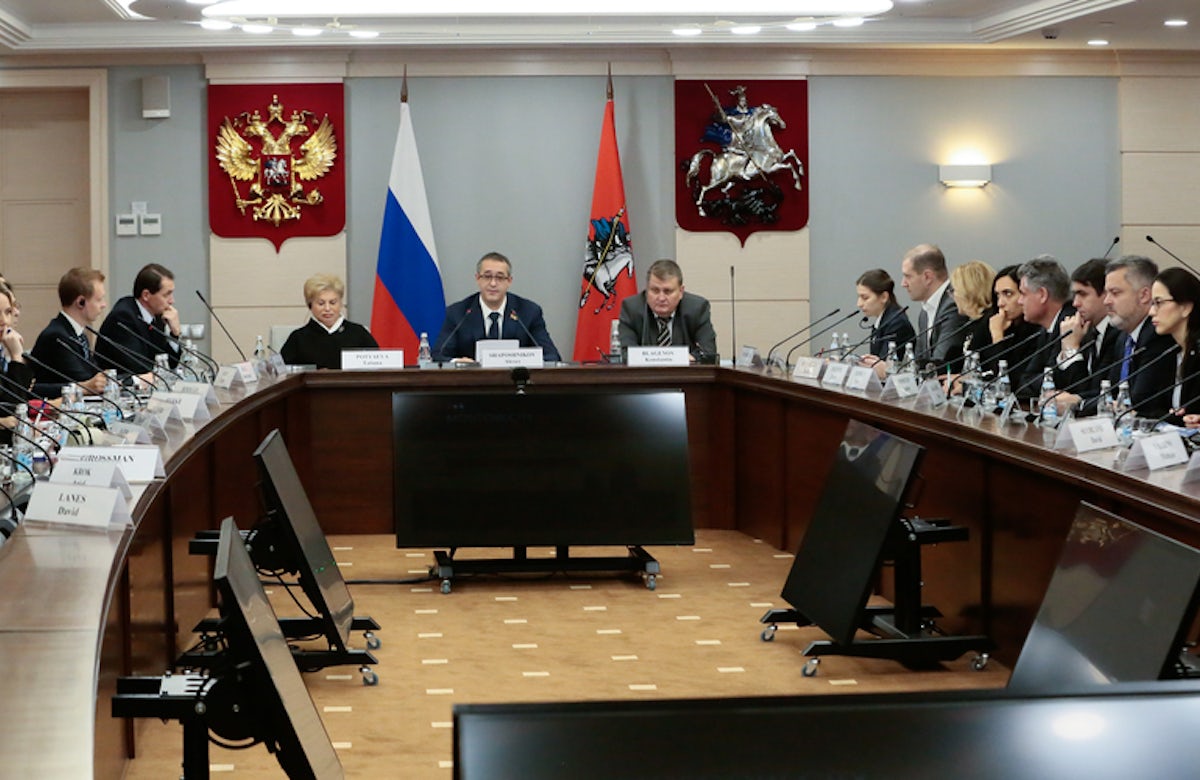 The WJC Jewish Diplomatic Corps gathered in Moscow October 28-31, 2018, for a Regional Meeting to participate in the WJC co-sponsored Second Moscow International Conference on Combating Antisemitism, Racism and Xenophobia and to engage in high-level diplomatic meetings at the Russian Ministry of Foreign Affairs, the Moscow City Duma, and 10 embassies throughout Moscow.

The Moscow conference gathered high-level government officials, civil and religious leaders, and Jewish organizations from all over the world to share best practices on combating anti-Semitism, racism and xenophobia. WJC CEO Robert Singer and WJC Commissioner for Combating Antisemitism Julius Meinl were key speakers at the conference, and members of the WJC Jewish Diplomatic Corps delivered numerous speeches and presentations on some of the most pressing issues facing Jewish communities around the world.

Also WJC Jewish Diplomats Gila Baumoehl (Germany) and Olga B. Karasik (Russia) delivered well-received presentations on “80 years after 'Pogromnacht‘ - Is anti-Semitism in Germany on the rise again?” and “What should we do with Fagin? Based on the experience of breaking anti-Semitic stereotypes when teaching foreign literature at university” respectively.

Beyond participating in the Moscow conference, a delegation of the WJC Jewish Diplomatic Corps conducted a diplomatic meeting with Alexey Shaposhnikov, Chairman of the Moscow City Duma and his senior staff on Tuesday, October 30th.

The focus of the meeting was to discuss Moscow's efforts to combat anti-Semitism, its extensive coordination with the local Jewish community, and the city's relations with Israel including trade, social programs and security. You can read more about the meeting at the Moscow City Duma here.

On October 31st, a delegation of WJC Jewish Diplomats was hosted at the Russian Ministry of Foreign Affairs to meet with Konstantin Kolpakov, Head of the Council of Young Diplomats at the MFA. Among the topics discussed were Russia’s role in combating anti-Semitism on the world stage, Russia-Israel bilateral relations, Russia as a player in the Middle East, and Russia in the United Nations.

The WJC Jewish Diplomats raised the challenges facing Jewish communities around the world and advocated for enhanced security of the Jewish communities and for improving the bilateral ties with Israel, as well as encouraged the adoption of the IHRA working definition on anti-Semitism – the only internationally recognized definition of anti-Semitism which states that the delegitimization of Israel and the comparison of Israel to Nazis is anti-Semitism. You can read more about the diplomatic meetings at the MFA and embassies here.