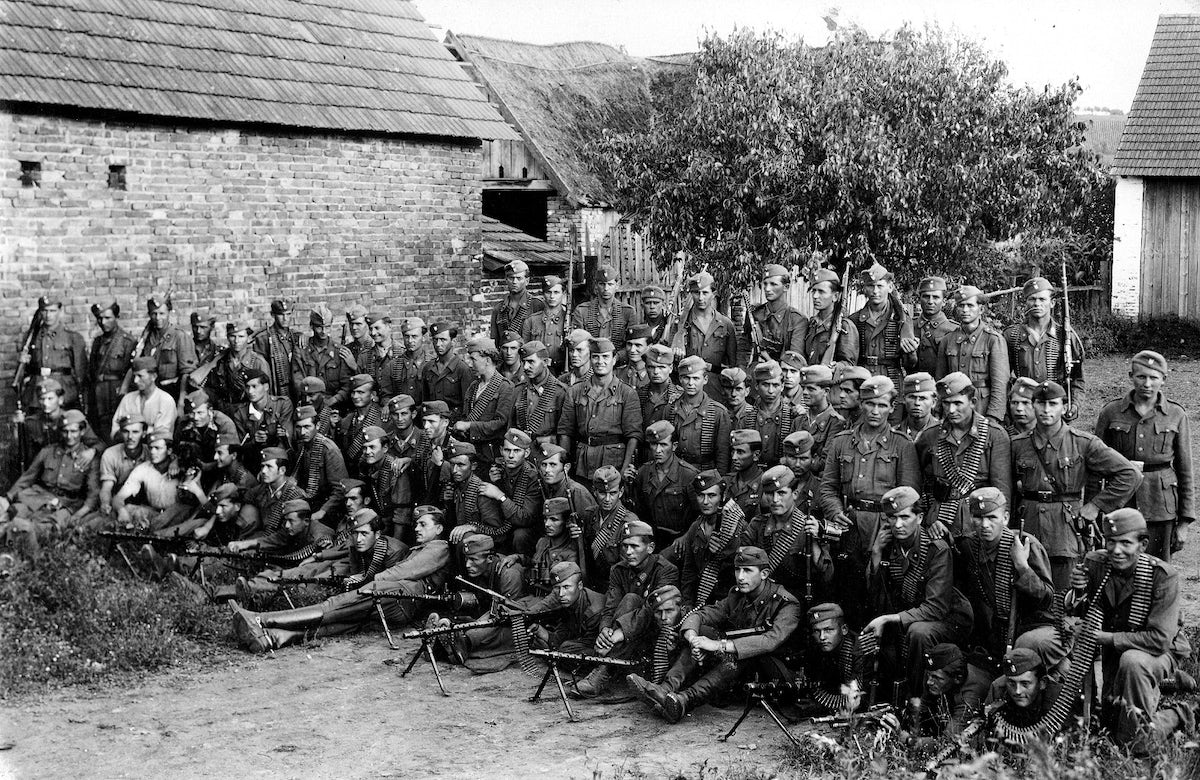 In 1941, what had been the Kingdom of Yugoslavia was dismembered at the hands of the German-led Axis powers. While segments of the country were allocated to Italy and Bulgaria, Croatia together with Bosnia and Herzegovina, as well as parts of Serbia and Slovenia, were reconstituted as the Independent State of Croatia – in Serbian/Croatian, Nezavisna Država Hrvatska (NDH) – led by the Ustasha, a Croatian fascist movement. The NDH promptly instituted genocidal policies, and between 1941 and 1945, the Ustasha aggressively and viciously murdered hundreds of thousands of Serbs and tens of thousands of Jews as well as Roma and Croatian political enemies of the fascist regime.

In May of 1945, as World War II came to an end, NDH forces, including members of the Ustasha, tried to flee to Allied-held territories, but were turned back by the British who handed them over to Yugoslav partisans in the Austrian town of Bleiburg. These NDH troops were then taken back to Yugoslavia on death marches in what has become known as the Bleiburg Repatriation.

In recent years, contemporary fascist adherents of the Ustasha and other neo-Nazis have gathered in Bleiburg to glorify the Ustasha members and others who had participated in the atrocities and mass killings perpetrated by and in the NDH. This year, because of the Covid-19 pandemic, the open-air event at Bleiburg was canceled, and replaced by a Catholic mass in Sarajevo, the capital of Bosnia and Herzegovina, to be held on 16 May, as well as two smaller commemorative events scheduled for Zagreb and Bleiburg.

The World Jewish Congress condemned these flagrant attempts to once again rehabilitate and glorify the Ustasha.

Menachem Rosensaft, WJC General Counsel and Associate Executive Vice President, declared in a statement disseminated in Croatian that it is deeply dismaying “that the fascists who sought to rid Croatia of its Jewish and Serbian populations, blindly following the wretched model emitted from Nazi Germany, would be honored as somehow contributing to the freedom and independence of the modern Croatian state, whose very constitution is principled on the anti-fascist struggle against the Nazi regime and its collaborators.”

Rosensaft continued, “The fact that the Croatian parliament is sponsoring such a contemptible display under the banner of honoring the memory of those who gave their lives for Croatian freedom is a slap in the face to all the innocent victims of the Ustasha, to all proponents of truth in historical memory, and to the Jewish communities across the region whose patriotism and personal security are called into question each time they oppose commemorations for those who brutally killed their forebearers.”

In an open letter, the President of the Jewish Community of Bosnia and Herzegovina, Jakob Finci, and the head of the Jewish Community of Sarajevo, Boris Kozemjakin, condemned the ceremonies as “attempts to rewrite history and equate victims with executioners. ... Husbands, fathers and other members of their families, who have committed atrocities against innocent people in the infamous concentration camps and massacres throughout our country, don’t deserve their name mentioned in Sarajevo.”

The WJC statement was featured prominently in news outlets throughout Bosnia and Herzegovina, Serbia, and Croatia, including the following, as of 15 May: