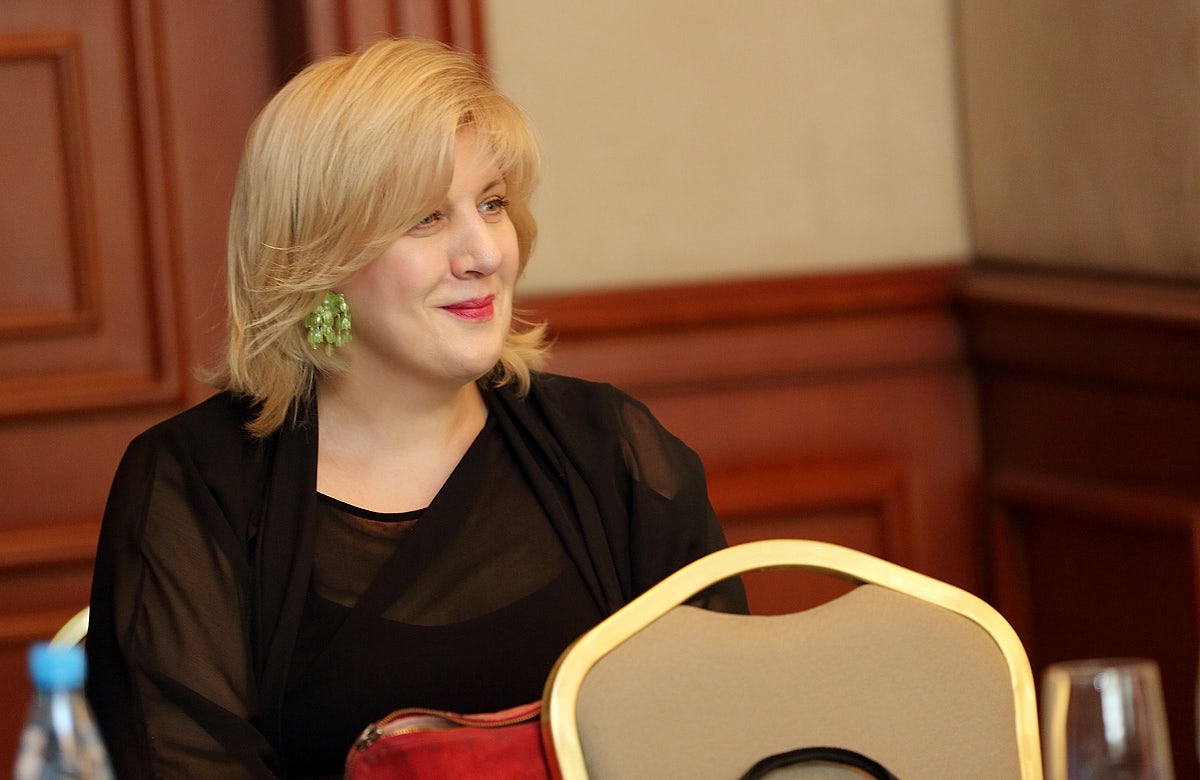 The World Jewish Congress hosted Commissioner for Human Rights of the Council of Europe, Dunja Mijatović, on 7 July as part of its ongoing WebTalk series. The discussion, moderated by WJC Associate Executive Vice President, Menachem Rosensaft, focused on both contemporary and recent human rights abuses in Europe, including the 1995 Srebrenica Genocide.

Hailing from Bosnia and Herzegovina, Mijatović has long been a human rights advocate in the region, focusing much of her attention towards freedom of expression in the media. Between 2010 and 2016, she served as the Representative on Freedom in the Media for the Organization for Security and Co-operation in Europe (OSCE).

Rosensaft opened the WebTalk with a question for Mijatović, inquiring about past experiences that continue to motivate her in her current position. Mijatović responded by reflecting on her time in the former Yugoslavia in the 1990s, including during the Siege of Sarajevo, and the mass communal suffering that the city and region experienced. She commented that, “In that period, I also learned how important it is that people do not only fight for their own rights, but also for those of others.” Mijatović additionally credits her “vocal” family, who also fought for the rights of all people in the former Yugoslavia.

Rosensaft followed her response with a query into contemporary human rights issues that plague Europe, and Mijatović replied that, “the rights that were neglected and not respected before [the] pandemic are now more visible,” and highlighted the plights of the Roma and LGBTQ+ communities. Mijatović further elaborated that during COVID-19 the rights of the elderly must be upheld and their right to healthcare must not be infringed. She referred to the pandemic as a “trigger” for the proliferation of antisemitism online, recognizing that it has become a metastasizing problem “poisoning” society.

“States should be equipped with the necessary provisions to punish those responsible for hate speech … when it comes to hate speech or incitement to hatred, I do not call this ‘freedom of expression.’ This is not free speech, this is something that we need to tackle, and I think that member states of international organizations, not just Council of Europe, but many others, have a huge toolbox of instruments they can use [to combat hate speech],” Mijatović remarked, further stressing that, “Hate speech and racism are always enemies of human dignity and pose an existential threat to a democratic society.”

Mijatović went on to emphasize the importance and necessity of 11 July as the Remembrance Day for the victims of the Srebrenica genocide. On that day in 1995, Bosnian Serb forces of the Republika Srpska army massacred Bosnian Muslim men and boys who sought refuge in the village of Srebrenica, while the women and girls were forcibly deported and subjected to mass sexual exploitation.

“The rhetoric that is used by high-level politicians – people with power – is disgraceful. The denial of genocide is something that has marked us [for] decades, and it doesn’t stop. It’s happening even now as we speak,” Mijatović explained, adding: “There are attempts to humiliate and to deny everything that has happened in this little town in Bosnia and Herzegovina that is so important for the rest of the world.”

Mijatović praised the WJC WebTalk series for giving a “voice to the voiceless,” as Rosensaft wrapped up the conversation by asking about future collaboration opportunities between her office and the WJC. She responded by underscoring the need for more cooperative events and discussions post-pandemic to fight antisemitism in Europe and raise awareness for victims and survivors of the Srebrenica genocide.

“Srebrenica marked generations of people from Bosnia and Herzegovina, from former Yugoslavia, and the world. Marking the day is, I would say, a drop in this struggle and fight for justice and truth in Bosnia and Herzegovina. Srebrenica, in a way, is our card for the future. I supported a request from the Madras of Srebrenica because I think this is the least the international community can do now when we are marking [the] 25th anniversary. I think it is extremely important to send a signal from all over the world to make sure that the words ‘never again’ are very clear. Unfortunately, nowadays in Bosnia - and Serbia in particular - this is not the case,” Mijatović stated on the contemporary impact of the genocide 25 years later.

Mijatović concluded by saying: “Your [WJC’s] voice is of extreme importance to the mothers of Srebrenica … this gives more power and more recognition in their fight for justice.”

Tune into our WebTalks each week on Zoom and Facebook LIVE.

WJC WebTalks are one-on-one in-depth conversations with noteworthy individuals within the WJC’s network regarding an issue of relevance to the WJC’s key constituencies including the political, diplomatic, and Jewish communities. WebTalks are held weekly on Zoom and streamed to Facebook Live.

WebTalk conversations have covered a wide range of issues including the United Nations’ fight against antisemitism, the advancement of Holocaust education, Israel’s battle to end bias at the Human Rights Council, the effects of COVID-19 on Jewish communities around the world, and more.

You can view past WJC WebTalks at webtalks.worldjewishcongress.org