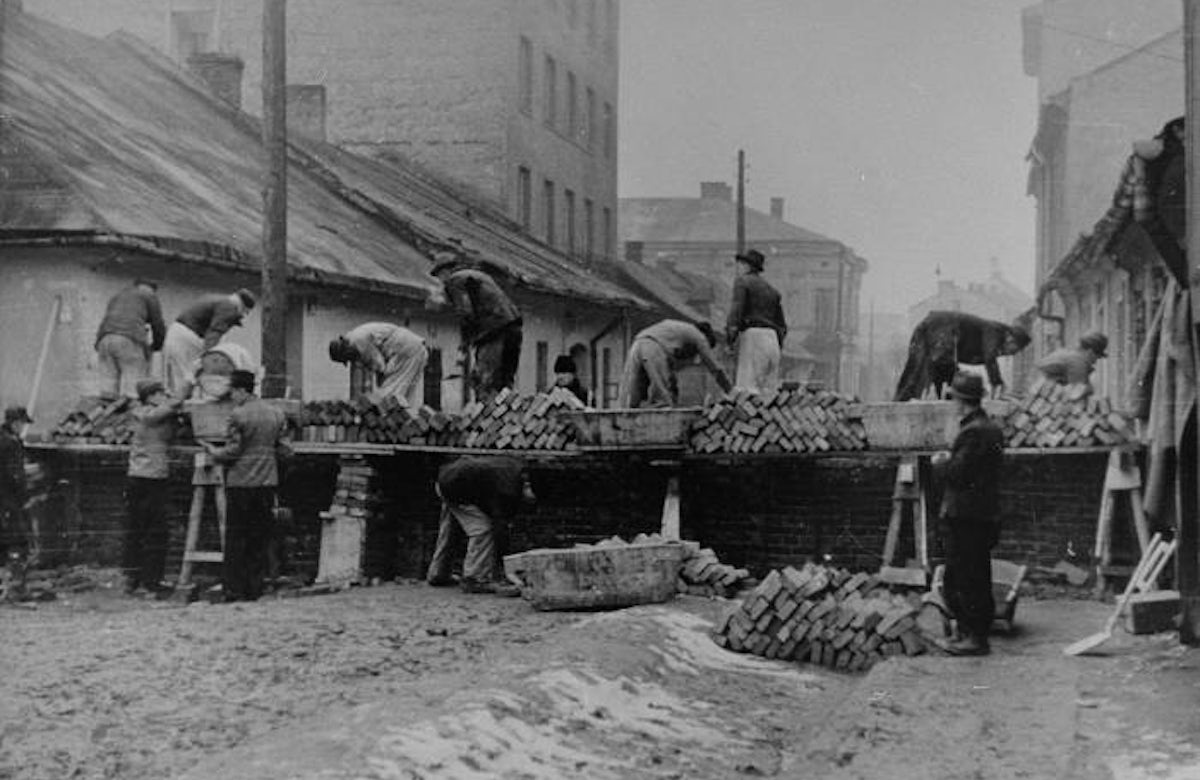 Following the invasion of Poland in 1939, Nazi forces invaded Krakow, turning it into the capital of its General Government in occupied Poland. Immediately after the invasion, the Nazis began enacting measures to persecute the approximate 70,000 Jews living in the city, including: requiring Jews in the city of Krakow to report for forced labor, identifying themselves by wearing white armbands with a Star of David, and registering their property.

By March 1941, the SS had expelled more than 55,000 Jews from Krakow to the neighboring countryside; about 15,000 Jews remained in Krakow, and later that year, the Krakow Ghetto was formally established. Conditions in the ghetto, which were enclosed by barbed-wire fences and in some places by a stone wall, were appalling, with Jews often passing away due to starvation and disease.  Factories were quickly established in the ghettos to take full advantage of the Jewish citizens forced to live there.

Senior Nazi officials arrived in Krakow in spring 1942 to carry out the initial steps of Operation Reinhard. On June 1 and 6, 1942, SS officials deported around 7,000 Jews to Plaszow. On 30 May 1942, “Operation Krakow” commenced with approximately 4,000 Jews being deported to the Belzec death camp, as well as with the demolition of the Great Synagogue in Warsaw. On 28 October 1942, approximately 6,000 of the remaining Jews in Krakow were deported to Belzec, while 600 other Jews – including approximately 300 children- other Jews were shot and killed.

Over the duration of the two-day liquidation operation, approximately 2,000 Jews were shot and killed, about 2,000 others were transferred to the Plaszow forced-labor camp, and 3,000 were deported to the Auschwitz-Birkenau killing center. Of the 3,000 deportees, 549 people were registered as prisoners in the camp, while 2,450 others were promptly killed in gas chambers.

Virtually all the remaining prisoners would be killed in the Plaszow forced-labor camp between September and December 1943, in several mass shooting operations, after revolts of Jewish prisoners in the Warsaw ghetto (April-May 1943), Treblinka (August 1943), the Bialystok ghetto (August 1943), and Sobibor (October 1943). While the number of Jews killed in the shooting is unknown, it is believed to have been up to 9,000.

When the war ended, approximately 4,200 Jews returned to live in Krakow, accounting for less than a tenth of the city’s original Jewish population.