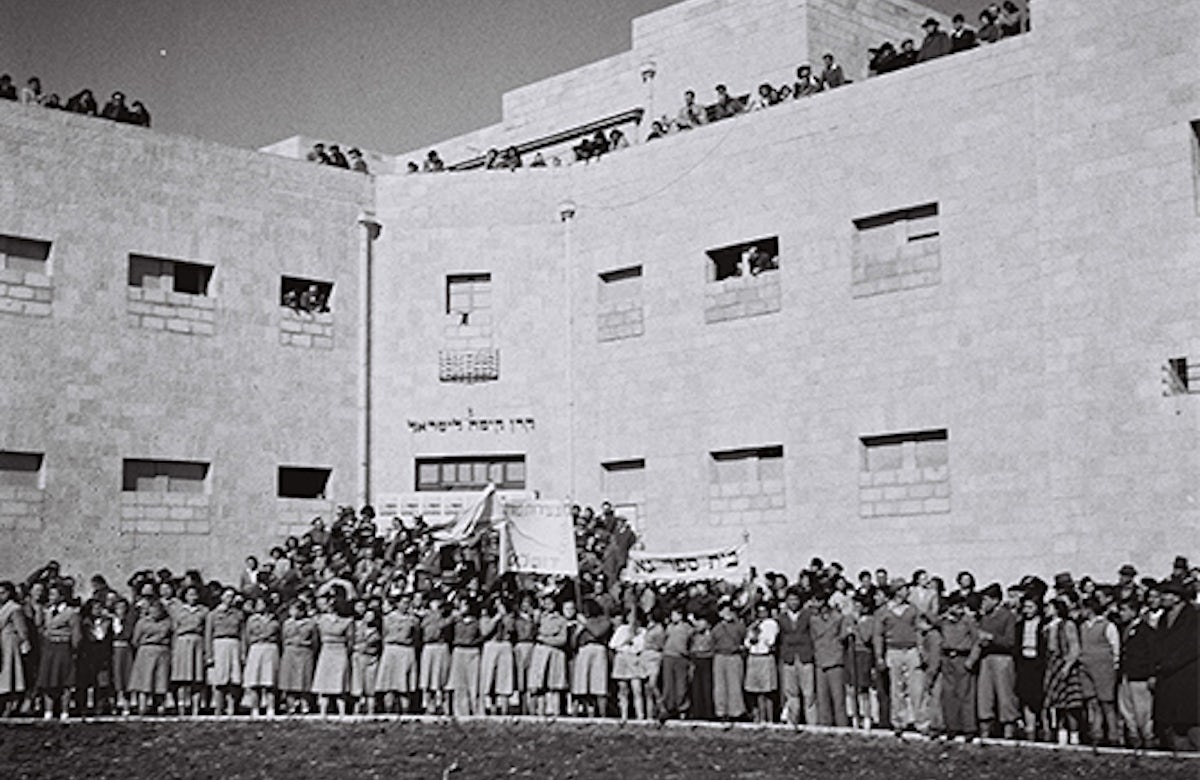 (c) Knesset: Schoolchildren gather in the courtyard of the Jewish Agency building in Jerusalem, before the first sitting of the Constituent Assembly, February 14, 1949

On 14 February 1949, Israel’s Constituent Assembly, the legislative body that served as the precursor to the modern-day Knesset, convened in Jerusalem for the first time.

Ahead of the inaugural meeting, schoolchildren carried Israeli flags and bouquets of flowers as they marched through the main streets of Jerusalem. They stopped in front of the Jewish Agency building in Jerusalem, where the newly elected members of the parliament attended a solemn service honoring Israel Defense Forces soldiers who had been killed in the ongoing War of Independence.

In his speech opening the inaugural session, President of the Provisional State Council Chaim Weizmann told the assembled 120 members of the parliament that, “It is with a sense of honor and awe that I rise to open the Constituent Assembly of the State of Israel, the first Jewish assembly of our day, in Jerusalem, the eternal city. At this great moment in the history of our people, we give thanks and praise to the God of Israel, by whose grace we have been privileged to see redemption, after generations of suffering and misery... Knesset Members, I congratulate you on your first meeting. Remember that the eyes of the whole Jewish world are upon you, and that the yearning and prayers of past generations accompany you..."

Following Weizmann’s remarks, Zionist leader Joseph Shprinzak was unanimously elected as Speaker of the Assembly. Two days later, the assembly ratified the Transition Law, which laid the foundation for Israel’s governance and officially renamed the assembly as the Knesset. Following the adoption of the Transition Law, the Knesset elected Chaim Weizmann as the first President of the State of Israel.

The first Knesset lasted for two and a half years, during which Prime Minister David Ben Gurion, the leader of the Mapai party, formed two separate governments. Given that the first Knesset took place during the War of Independence, debate in its initial years often discussed Israel’s ceasefire agreements Israel with its neighbors, as well as the state’s status in the international arena.

The Knesset, which held its first sitting in Tel Aviv due to the war that put Jerusalem in danger, took its name and fixed its membership at 120, as a reference to the Knesset Hagedolah (Great Assembly), the representative Jewish council convened in Jerusalem by Ezra and Nehemiah in the 5th century B.C.E.