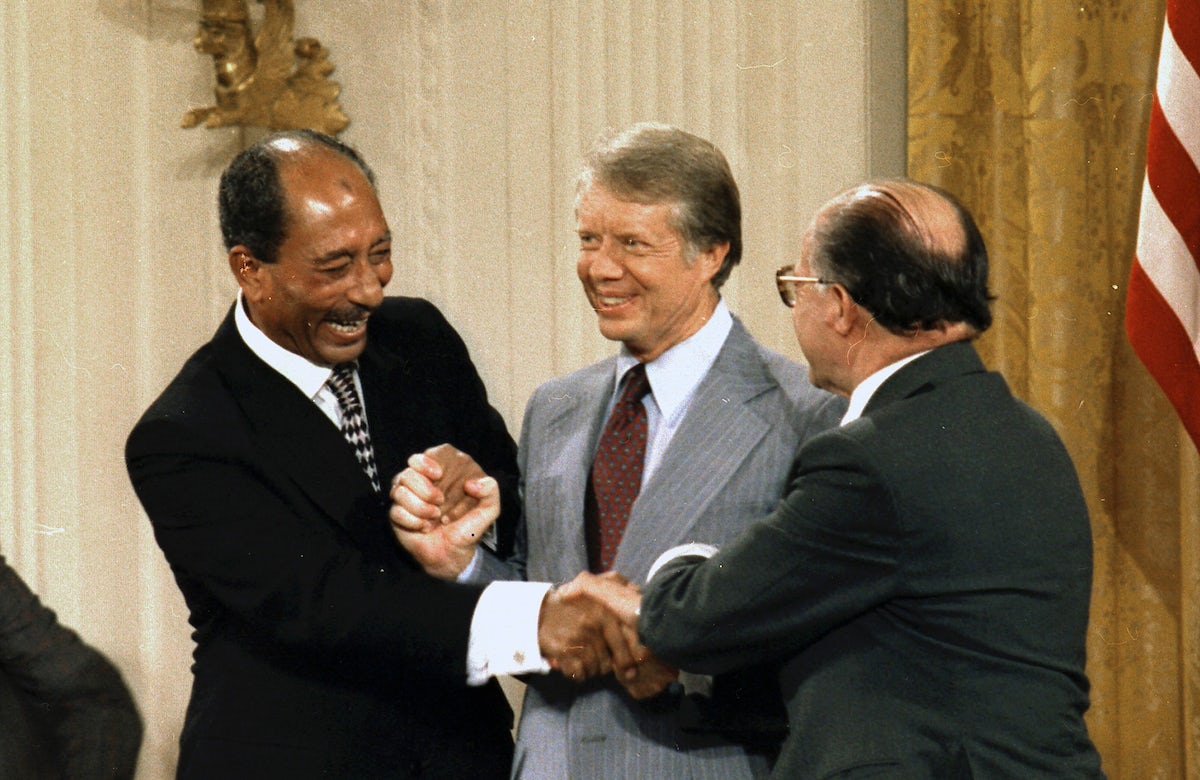 On 17 September 1978, Israeli Prime Minister Menachem Begin and Egyptian President Anwar Sadat laid the groundwork for peace between the two nations by signing the Camp David Accords at the White House. The agreement formed the foundation of a comprehensive peace agreement, which would be formalized in the 1979 Egypt-Israel Peace Treaty.

The accords were the result of a private twelve-day summit between the two leaders and United States President Jimmy Carter at Camp David in rural Maryland. As the negotiations proceeded, the prospects for success seemed so bleak that Sadat threatened to leave.

Further complicating negotiations were the vastly different personalities of Begin and Sadat. Begin was known to be extremely detail-oriented, so much so that he insisted that the summit's objective be to develop an agenda for future meetings. The Egyptian leader, however, hoped the summit would settle all controversial issues in just a few days.

However, an agreement was reached on the last day of the summit when Begin and Sadat compromised and allowed the Knesset to determine the fate of settlements in the Israeli-occupied Sinai Peninsula, which was perhaps the most controversial and difficult issue.

Under the terms of the agreement, Israel agreed to withdraw from the Sinai Peninsula and Egypt would formally normalize relations with Israel. Additionally, the leaders established a broad framework for achieving peace in the region.

During the signing ceremony, Carter optimistically said, “If our present expectations are realized, this year we shall see such peace again.…We must also not forget the magnitude of the obstacles that still remain. The summit exceeded our highest expectations, but we know that it left many difficult issues which are still to be resolved.”

Begin praised Carter, adding that the summit should be renamed the "Jimmy Carter Conference" due to the president’s great leadership. “Mr. President, we, the Israelis, thank you from the bottom of our hearts for all you have done for the sake of peace, for which we prayed and yearned more than 30 years. The Jewish people suffered much, too much. And, therefore, peace to us is a striving, coming innermost from our heart and soul,” Begin said.

Sadat and Begin were awarded the Nobel Peace Prize a later year for their historic agreement.

Following the Camp David Accords, Sadat and Begin signed the 1979 Egypt-Israel Peace Treaty, formally making Egypt the first Arab state to achieve diplomatic normalization with Israel and ending the state of war between the two countries.

In October 1981, Sadat was assassinated in Cairo. Nevertheless, the peace process between the two countries endured.