The lesson from Halle: We must take action against antisemitism, racism, and fascism - World Jewish Congress

The lesson from Halle: We must take action against antisemitism, racism, and fascism 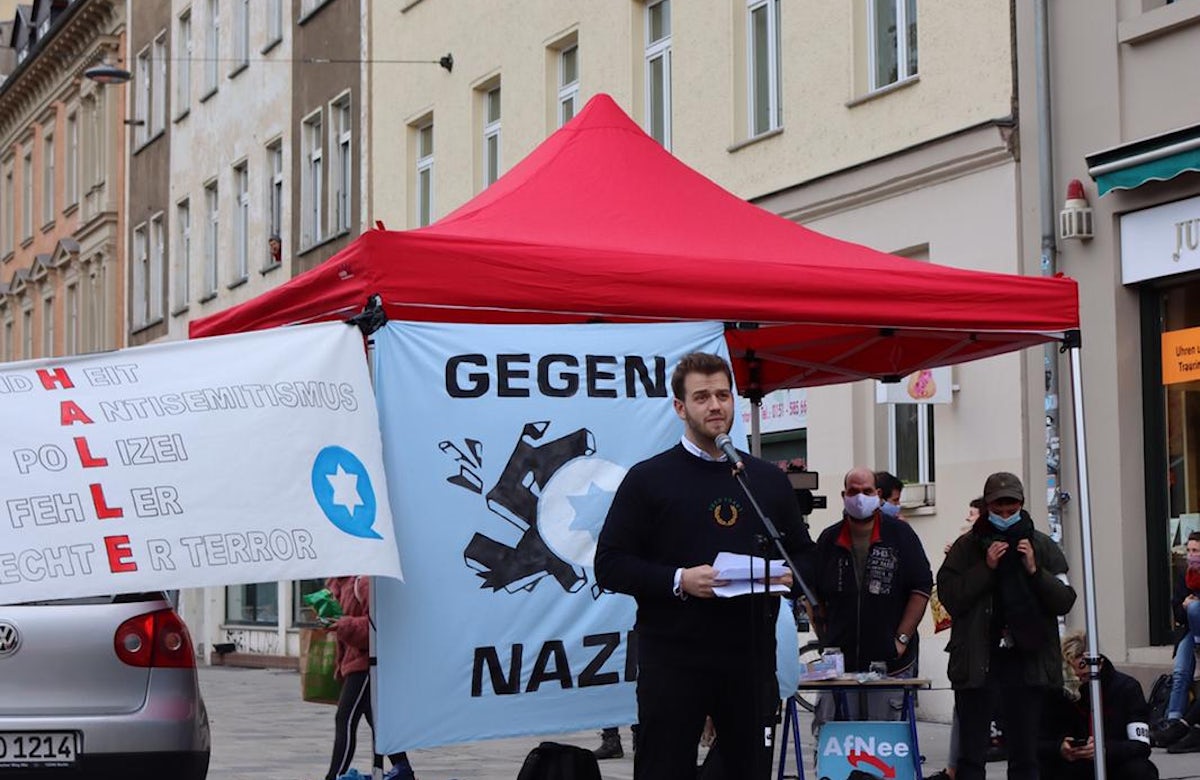 One year ago, on 9 October 2019, a right-wing extremist attempted to hunt down Jews in Halle, Germany. After the gunman failed to break into the synagogue and murder the dozens of people gathered inside on Yom Kippur, the holiest day of the Jewish calendar, he opened fire on two innocent bystanders, Jana and Kevin.

This year, on the holiday of Sukkot, a copycat in Hamburg tried to emulate the assassin from Halle and attacked a Jewish student in front of the local synagogue. Six additional antisemitic attacks were carried out during the holidays across Europe.

The attack in Halle was exactly the scenario we have been warned about since we were small children. The scenario we have been warning about. Most European Jews are used to being questioned by armed security forces before Jewish events. The European Union of Jewish Students (EUJS) does not publish its office address out of concern for our security. My Jewish day school growing up looked like a prison. Inside that school, we did not only practice fire alarms but terror alarms, as well.

On my first trip abroad with EUJS, we first went to Brussels, where machine gun-carrying soldiers guard synagogues. Afterward, we went to Washington, D.C., where I saw for the first time in my life an open synagogue door, with no security or protection. In Washington D. C. felt more unease than I do in Europe. Because for me - as for most Jews in Europe - the constant presence of security measures, the feeling that something could happen is absolute normality.

Even so, you are never really prepared for when it actually occurs.

In Halle, however, not even these security measures were taken last Yom Kippur. One of the biggest attacks against European Jews since World War II was prevented by a volunteer security guard, a sturdy wooden door, and the assassin’s ineptitude.

Somehow, the police in Halle did not find it necessary to protect the synagogue. They did not know the significance of Yom Kippur or why there was greater danger on that day than other days in the calendar. This is the same police force that has been repeatedly infiltrated by right-wing extremist networks throughout Europe. The same police force, which for years has continually underestimated the danger of the extreme right. We Jews cannot wholly rely on the state to protect our lives. Halle shows that. In the 21st century, in Europe, we must take our security also into our own hands.

However, the problem is much more profound. One survivor of the attack, Sabrina, got right to the point when she asked, “What is it about our society that made the assassin believe that he could get away with what he did?” Unfortunately, it is a lot. It is his ideology. This trident of hate, consisting of antisemitism, racism, and misogyny that united the Halle assassin with the terrorists in Christchurch, Hanau, Pittsburgh, and Poway. Which led to the murder of Walter Lübcke, NSU 2.0, and Hannibal. The antisemitic ideology of the “Great Replacement,” a far-right conspiracy myth propagated by the neo-fascist Generation Identity and carried into our parliaments, and in some cases governments, by parties such as the AfD (Germany), the FPÖ (Austria), and the Front National (France)!

And then there are those who collaborate with right-wing extremists, those who normalize their discourse, those that demonstrate with them, and, at the same time, caution against extremism “on all sides.”

But it is especially those who have ignored our warnings for years. All of them have created a climate that led the assassin to believe that society would accept such actions. The assassin was not a “disturbed individual perpetrator.”

A year after Halle, it is mainly Jewish voices speaking about the attack. That is a problem. In a society that takes note of Jewish communities only when the Shoah, antisemitism, or the Middle East conflict are discussed, it is again Jews who have to talk about antisemitism.

I would much rather write about the many great young Jewish initiatives across Europe, about the exhibition of young Jewish women artists that I recently saw, about the holiday of Sukkot, or the EUJS campaign against the genocide of the Uyghurs. But once again, I have to write about antisemitism and fascism so that others will finally take action. Above all, I would like to write about the vision of a genuinely multicultural society interwoven with Jewish and migrant narratives.

On Yom Kippur, we also wish for a better world and pray for the victory of light over darkness. Our goal must be a world where discrimination is fought against consistently because to guarantee our long-term security, thick walls, and more security cameras are not enough. We need a society in which there is room for everyone, in which doors are known for being open and not for preventing attacks. A society based on a real and lasting antifascist and antiracist consensus. This has to be the lesson from Halle.