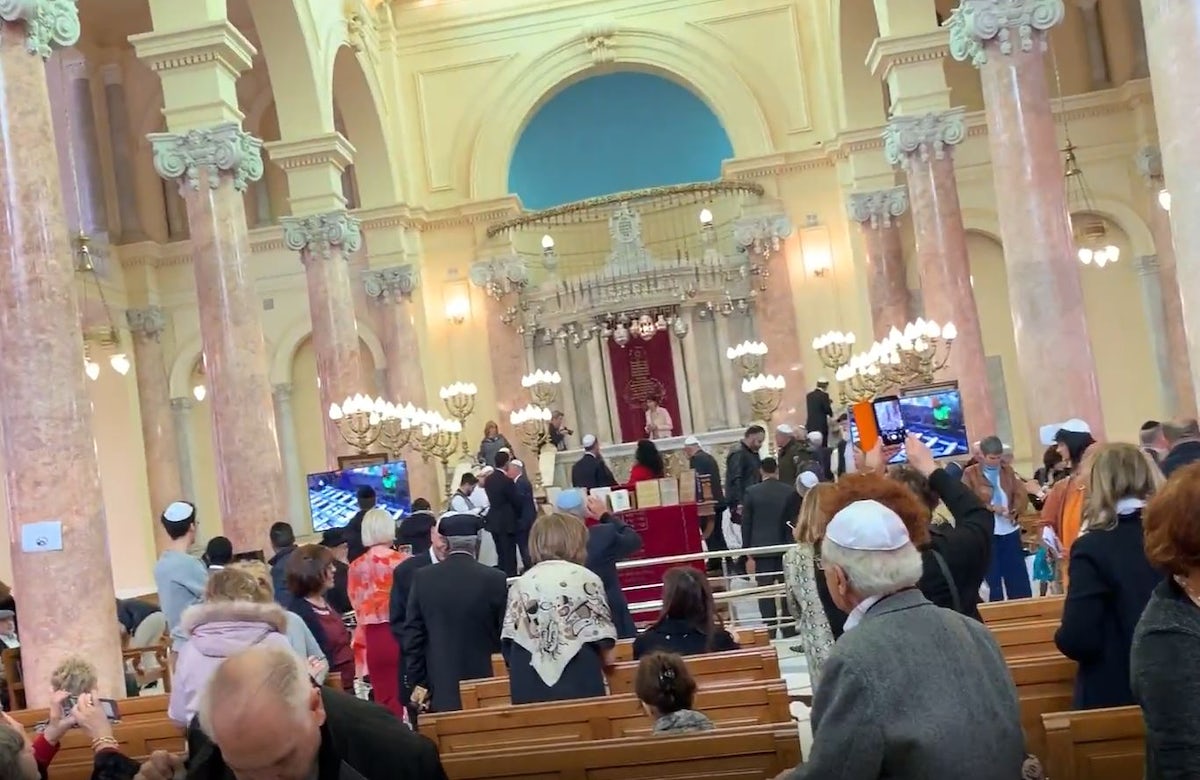 Nearly 200 Jews gathered in Alexandria, Egypt last week to celebrate the rededication of the 2,000-year-old Eliyahu Hanavi Synagogue, which was recently renovated by the Egyptian government at some 68 million Egyptian pounds ($4.23 million).

The delegation of pilgrims, which comprised Jews living mostly in France, England, Israel, and the United States, arrived in Egypt on Thursday. Before the start of Shabbat, participants visited several Jewish cemeteries, which had been cleaned prior to the delegation’s arrival by the Nebi Daniel Association, an organization that works to preserve Jewish sites in Egypt and organized the weekend’s festivities

Alec Nacamuli, a former resident of Alexandria and a board member of the Nebi Daniel Association, described returning to Egypt as a very emotional experience, saying that for the first time in decades Egyptians like him were able to sit “in our fathers’ seats saying a full-blown prayer service.” Levana Zamir, the head of the International Association of Jews from Egypt, the experience brought her to tears, saying “I never imagined I would see my grandson here, holding a Sefer Torah, with the tallit (prayer shawl) on his shoulder.”

Before the ceremony welcoming in the Shabbat commenced, some participants lit candles in memory of family members who had passed away in Egypt. United States Ambassador to Egypt Jonathan Cohen and former Israeli ambassador David Govrin, and Rabbi Andrew Baker, who is the son of the last rabbi of Alexandria, were present at the ceremony.

Following the communal prayers on Friday night, the delegation held the traditional Shabbat dinner, as well as prayer services the next morning.

The synagogue’s current structure was erected in the 1850s, after the original building was damaged during a French invasion of Egypt. Unfortunately, rain began to leak through the roof into the women’s section around seven years ago and shortly thereafter, part of the synagogue’s roof collapsed.

The city of Alexandria in Egypt was once home to a diverse population of Muslims, Jews, and Christians. While the number of Jews living in the city has decreased to only a handful, their remaining structures stand as a reminder of the city’s rich Jewish past. The completion of the synagogue began less than year ago after Egypt announced they would designate 1.27 billion Egyptian pounds ($76.1 million) to restore heritage sites in Egypt of national importance.

The events from this past weekend follows a smaller ceremony in January, which was attended by Egypt’s Antiquities Minister Khaled Anani, leaders of the Alexandria and Cairo Jewish communities, and at least two dozen diplomats.