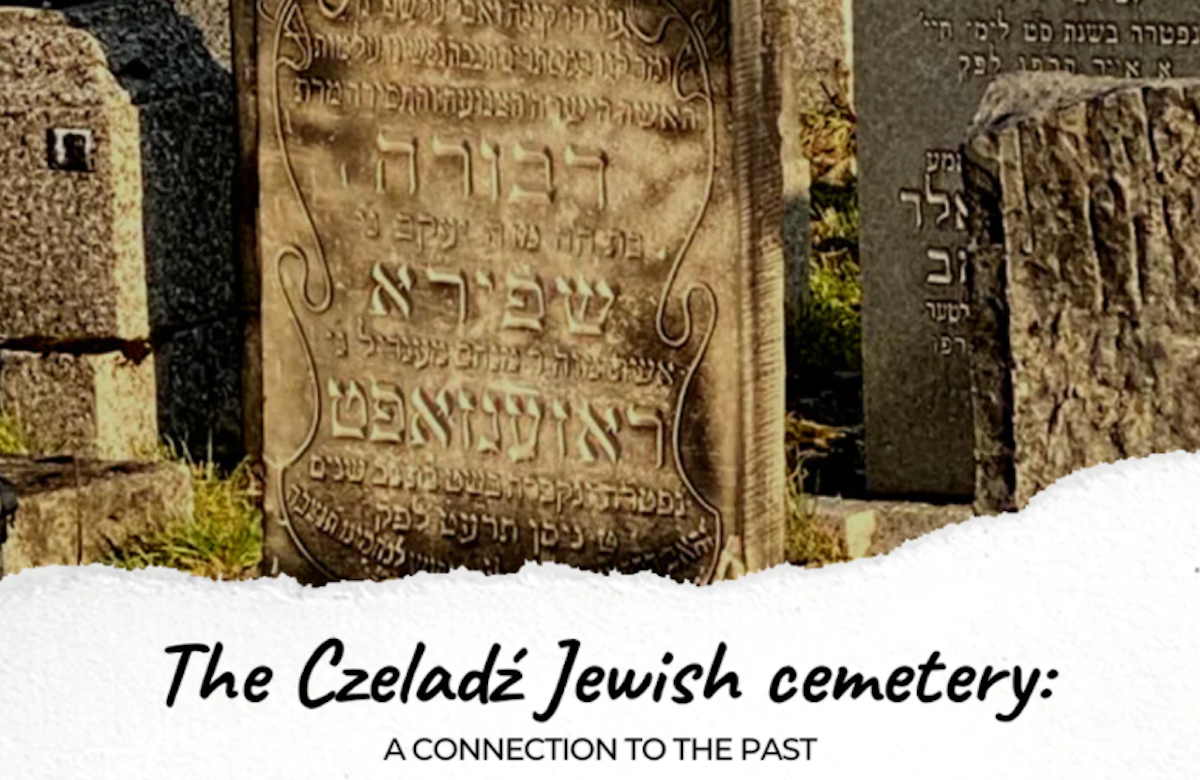 It was a mid-summer’s day in 2018. I was one of the organizers and leaders of a group of more than 200 Jews from the US, Israel, Canada, Australia, Belgium, Germany, Norway, and Sweden who had come to southern Poland to explore our common roots in the region known as Zaglembie (in Polish, Zagłębie). The trip was sponsored by the Israel-based Zaglembie World Organization, in cooperation with the World Jewish Congress.

On Tuesday morning, 31 July, we went to the Czeladź Jewish cemetery, located between the town of Czeladź and my father’s adjacent hometown of Będzin, where more than 3,000 Jews are buried. It is one of the best-preserved Jewish cemeteries in Poland, thanks to the Czeladź municipality and the efforts and generosity of a survivor from Czeladź, the late Moniek Stawski.

I wanted to find – no, I had to find – one particular grave. My grandmother, my father’s mother who died in the 1919 flu epidemic when my father was eight years old, is buried here. I found myself walking anxiously through rows and rows of tombstones, looking for her grave. Many of the stones are broken, their inscriptions faded, often illegible.

I knew that my grandmother’s tombstone had survived World War II intact. In the 1950s or early 1960s, a friend of my father’s was here and photographed it. I was told that it is near the front of the cemetery, but the coordinates I had been given turned out to be inaccurate. A different name was on the stone in the location where my grandmother’s grave was supposed to be – someone else was lying in that spot.

I looked nearby, to the left, to the right, a row further back, a row further to the front. In vain. No stone for Deborah, wife of Mendel Rosensaft, daughter of Yaacov Szpiro.

I began to feel deeply, profoundly depressed. One of the main reasons for my going on this trip was to say Kaddish at my grandmother’s grave. I hadn’t realized how much this meant to me until it looked like it might not happen.

One thought overwhelmed me. How could I tell my father that I couldn’t find his mother’s grave? My father had died more than 42 years earlier, in 1975. Still, I had the overwhelming feeling that I could not – must not – disappoint him. Or myself, for that matter.

I imagined my father shaking his head and saying to me, “There was only one thing I wanted you to do on this trip, and you couldn’t do it?”

I searched further, almost frenetically, reading the inscriptions on the stones as I went from row to row.  No success. My heart beat faster. A sense of panic set in. I looked again, and realized I was seeing the same names, over and over.

From the first row, I heard my cousin Susan Rogol calling me. “Here it is, Meni. I found it!”

I literally ran over. It was indeed my grandmother’s grave. A candelabra with two broken candles is engraved on the gravestone, symbolic of a life cut short too young.

Others on the trip found graves in the Czeladź cemetery, as well.

My cousin Susan found the graves of her father’s sister, Deborah Yachet Zander, and of my father’s sister Leah’s husband, Israel Levi Justman, who died in the same epidemic as my grandmother in 1919.

Standing in front of the graves of her grandparents, Raisl and Baruch Wohlhander, took Trudy Elbaum Gottesman’s “breath away.”

Naomi is the daughter of Moniek Stawski, the survivor responsible for the preservation of this cemetery. She and her husband André are intent on continuing Stawski’s mission of maintaining the Czeladź cemetery. Working with a local couple, Piotr and Karolina Jakoweńko, they have also created a website where family members of the Jews buried in the cemetery can locate their relatives’ graves and see photographs of their tombstones, without having to travel to Poland to do so.

The Czeladź Jewish cemetery is only about an hour’s drive from Auschwitz. This past January, I returned with my wife Jeanie and our niece. I hope to come there again with our grandchildren, to show them my grandmother’s grave, the only existing pre-Holocaust grave of any member of my family. And perhaps, someday, Hallie and Jacob will in turn bring their own children there, to connect them with their past.

Menachem Z. Rosensaft is Associate Executive Vice President and General Counsel of the World Jewish Congress. He teaches about the law of genocide at the law schools of Columbia and Cornell Universities

For a Polish translation of this article click here.