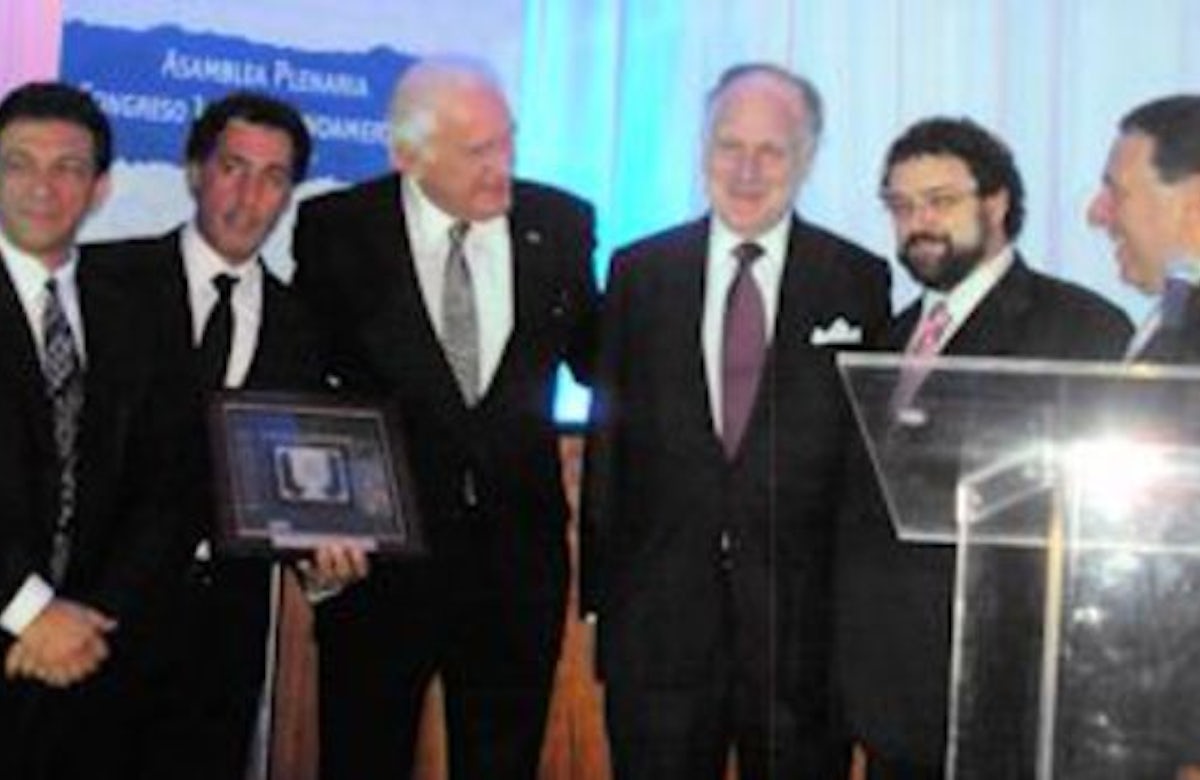 Combating anti-Semitism, working towards the re-establishment of relations between Israel and Venezuela and message of Jewish unity were the main themes of the Plenary Assembly of the Latin American Jewish Congress in Caracas, which was attended by Ronald S. Lauder, president of the World Jewish Congress (WJC), and other WJC officials.

The president of the Confederation of Jewish Communities in Venezuela, David Bittan, denounced a recent rise of anti-Semitic incidents in Venezuela and said his organization would strive for diplomatic relations with Israel to be re-established.

On Tuesday, Lauder and the LAJC leadership met with Venezuelan Vice President and Foreign Minister Nicolás Maduro (see picture below) at which they raised this and other issues on behalf of the Venezuelan and international Jewish community. “We raised our concerns about anti-Semitism, and we urged Venezuela to re-establish diplomatic relations with the State of Israel. Our meeting with Vice President Maduro was constructive. He made it clear that expressions of anti-Semitism cannot be tolerated by the government of Venezuela,” Lauder declared after meeting with Maduro in Caracas.

The Venezuelan leader, who is currently filling in for President Hugo Chávez, thanked the LAJC for holding its meeting in Caracas. More than sixty Jewish leaders and community representatives from across Central and South America participated in the LAJC assembly, which confirmed Brazilian Jack Terpins in his post of president of the organization.

At a dinner held in his honor, Lauder highlighted the positive contribution made by Jews across Latin America over the past centuries to their respective countries and said: “The Jewish presence in Venezuela dates back several centuries, probably to the days the Spanish first landed here in this continent. As you probably know well, Jews were the main financial supporters of Simon Bolivar; Jews offered refuge to Bolivar’s sisters; and Jews fought next to Bolivar to secure the freedom and independence of this land. During all this time, generations of Venezuelan Jews supported the construction of this great country.

"They contributed to the building of a strong and vibrant nation. For many years, they lived here in a climate of respectful coexistence and freedom. But something changed. Anti-Semitic sentiment was aroused, and grew with unexpected strength in this country. Venezuelan Jews were singled out because of their religion. Synagogues were vandalized. The media began heaping blame on fellow Venezuelans, simply for the being Jews.”

“The World Jewish Congress combats anti-Semitism around the world. We denounce it strongly wherever it appears, as we did here in Venezuela. And we did it in front of President Hugo Chávez,” Lauder told the dinner guests, referring to a 2008 meeting between the Venezuelan leader and a delegation of WJC and LAJC. “We raised our concerns about anti-Semitism, and we urged Venezuela to re-establish diplomatic relations with the State of Israel. They pledged action, and certain things have improved. But unfortunately diplomatic relations have not yet been restored.”

The dinner was attended by a number of Venezuelan officials and legislators from both the government and the opposition.

In his address, Lauder also called on Jewish communities to defend Israel against growing international attacks on its legitimacy. “As Jewish communities, we naturally defend Israel’s right to exist in peace and prosperity, even if we don’t always agree with everything the Israeli government of the day does. Who if not we can help to improve the image of Israel in the world?”

The WJC president also raised the issue of the 1994 terrorist attack against the AMIA center in Buenos Aires, Argentina, in which a number of former and current Iranian government officials are implicated, and said justice had to be done and the accused had to stand trial.

Referring to Tuesday’s Knesset elections, Lauder urged renewed efforts for peace between Israelis and Palestinians: “Wherever our political preferences lie, what unites all Diaspora Jews is a strong desire for peace in the Middle East. Whoever forms the new government has a moral obligation to leave no stone unturned in the search for peace. It is true: the Palestinians unilateral action at the United Nations has set back the peace process. But we cannot despair. The situation in the Middle East is not likely to improve in the coming months – on the contrary: things are getting worse. It is therefore vital that the moderates on both sides, the Israelis and the Palestinians, now take bold and courageous action towards a peace deal. What’s important is not how that deal looks but that both sides can support it.”

More than sixty Jewish leaders and community representatives from across Central and South America participated in the LAJC gathering.

The assembly in Caracas confirmed Jack Terpins in his post of president of the Latin American Jewish Congress for another term, while Saúl Gilvich was confirmed as secretary general. Javier Mutal will be treasurer of the LAJC. As vice-presidents were elected: Julio Schlosser and Guillermo Borger (Argentina), Claudio Lottenberg (Brazil), Roberto Cyjón (Uruguay), Gerardo Gorodzinsky (Chile), Eduardo Moreno (Colombia) and Ricardo Udler (Bolivia). Other members of the Executive include Guiora Esrubilsky, Claudio Presman, Natalio Fichelson and Ronald Bakalarz. Ariel Isaak was elected as the representative of the younger generation.

New statutes for the organization, which serves as the regional branch of the World Jewish Congress, were also approved.