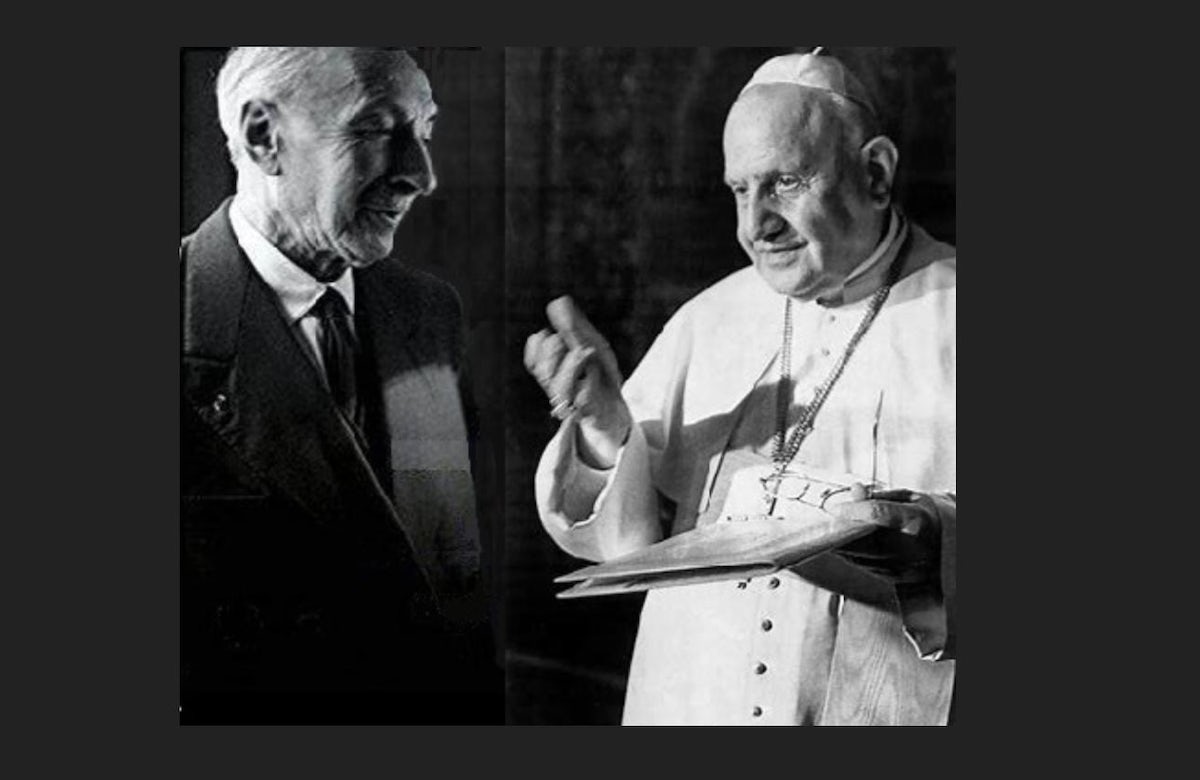 On June 13, 1960, renowned French-Jewish historian Jules Isaac embarked on what would become the spark for a dramatic rapprochement between the Catholic Church and the Jewish people. On that day, he had a private audience with Pope John XXIII and laid forward the Jewish case for bringing Jews and Catholics together.

This was not the first time that Jules Isaac had met with a pontiff. In 1949, he presented Pope Pius XII with 18 points to consider as a basis for Catholic-Jewish reconciliation, underscored by the necessity for comprehensive Christian education about Judaism. In January 1959, when the Second Vatican Council was announced, Isaac believed that there was an opportunity for encouraging bishops around the world to support such an initiative, and he managed to secure a meeting with John XXIII the following year. In parallel, a seismic shift was set in motion, beginning with Pope John XXIII’s decision in 1959 to remove, for the first time, the term “perfidious” from a traditional prayer for the conversion of Jews.

In that critical 1960 meeting, Isaac gave Pope John XXIII a dossier of information on how Jews and Judaism are taught in Christianity, emphasizing its directly destructive nature as a cog in the never-ending cycle of antisemitism. He suggested to the Pope that a commission be formed to deal with this matter at the upcoming ecumenical council. Isaac later recounted that the Pope had assured him that the matter was under consideration, and that the meeting concluded in an atmosphere of optimism.

World Jewish Congress Director of Coordination (later Secretary General) Gerhard Riegner had, by this point, devoted his life’s work following World War II to promoting interfaith relations between Christians and Jews. Riegner recognized that the meeting between Isaac and the Pope could serve as a catalyst for constructive dialogue, and could result in a condemnation by the Catholic Church of antisemitism and genocide, as well as eventual recognition of the State of Israel.

Riegner set forth a plan of action which resulted in a memorandum dated February 17, 1962, written by then-WJC President Nahum Goldmann and B’nai Brith International President Label Katz, and sent to Cardinal Augustin Bea, a German Jesuit who had been appointed to head the new Secretariat for Promoting Christian Unity.

The memorandum summarized the Jewish point of view on the agenda items proposed for discussion at the Second Vatican Council, urging the Holy See to recognize, that, “Have we not all one Father? Hath not one God created us? The challenge of the Prophet lays upon all of us the most solemn obligations. The differences which separate us are real and important; it were [sic] foolish to overlook and underrate them. But they cannot nullify the commandment to love our neighbor”.

The memorandum declared that the fight against antisemites was “an integral element of these aspirations for a better world.”

“What constitutes for us – as it does no doubt for the Church – a source of deep distress is that the antisemitic agitation and incidents are occurring, with rare exceptions, in European countries or overseas countries with European populations, which are, or have been, ingrained by the influence of Christianity. We venture to express the convictions that in the contemporary world wherever antisemitism poses a danger to the Jewish community, it constitutes at the same time a threat to the Church,” the memorandum continued. Further, it lays bare the conviction that “We cannot truly call on God, the father of all, if we refuse to treat in a brotherly way any man, created as he is in the image of God. Man’s relation to God the father and his relation to men his brothers are so linked together that Scripture says: “He who does not love does not know God (I John 4:8)”.

This memorandum, and the years of efforts by Riegner, Isaac, and other prominent Jewish activists, indeed led the Second Vatican Council to include in its Nostra Aetate of October 28, 1965 a revolutionary declaration that the Catholic Church “decries hatred, persecutions, displays of antisemitism, directed against Jews at any time and by anyone.”

The memorandum, drafted as it was by the leaders of differing streams of Judaism with often clashing world views, also served as a unifying force in the common pursuit of ending more than a thousand years of Christian persecution. Goldmann, as president of the WJC, was instrumental in drafting this memorandum to ensure that its message was clear, inclusive, and representative of all Jewish streams.

In the 60 years that have passed since Jules Isaac held his private meeting with Pope John XXIII to ameliorate Catholic-Jewish relations, the Church has become an important ally of both the State of Israel and Jewish communities worldwide, united in a common quest for tolerance and coexistence.