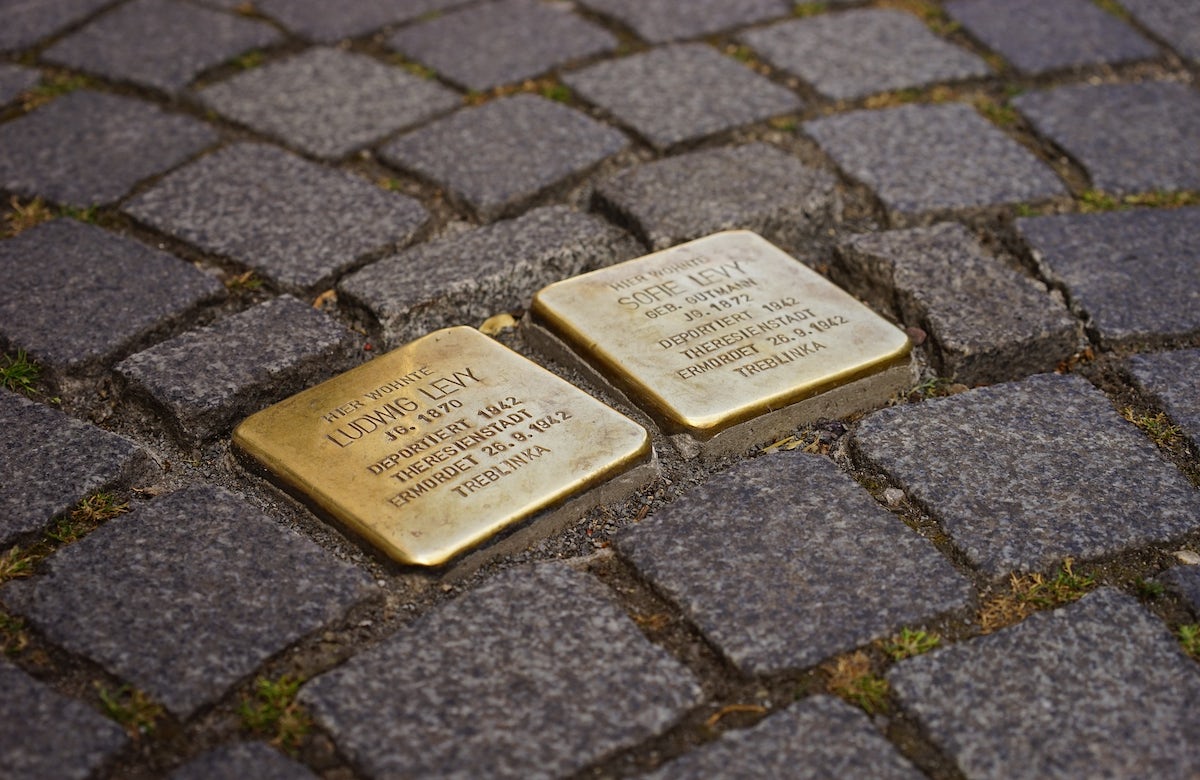 Approximately 50 new stolpersteine, or stumbling stones to honor the memory of Jews murdered during the Holocaust, were installed in Berlin recently, through the support of the major German publishing house Axel Springer, at its new headquarters in Zimmerstrasse. Each stolpersteine commemorates a victim or multiple victims of the Holocaust outside their last place of residence. Inscribed on the stones are the names of the victims and the date of their deportation by the Nazis.

Mathias Döpfner, chief executive of Axel Springer, remarked that the new building was “grounded in the ruins of German history,” and that the stumbling stones “recall the terrible fates of the Jewish victims who lived on this patch of ground, like barbed hooks of history catching us as we pass.”

“The resurgence of antisemitism in Germany, of all places, reminds us that in our fight against it, we must not be content to dwell in the memory of it, but must actively oppose it,” Döpfner added.

At least 26 Jews were taken to their deaths from Zimmerstrasse 48a and 48b, including Arthur Israel Alexander - who was sued for unpaid rent after he was deported - and Mordechai Tanin - who died from pneumonia, while his wife and two children were deported and killed in Auschwitz.

In her remarks, Culture Minister Grütters said she hopes the new stumbling stones will help people “remember those who were persecuted and murdered and give them back their names and a place of remembrance.”

The stones were installed with the support of artist Gunter Demnig, who has been a leading figure in the movement to install stumbling stones across Europe. According to the Jewish Telegraphic Agency, there are 26 European Union member countries with the stumbling stones and currently 75,000 such memorials across Germany.

Ahead of this year’s International Holocaust Remembrance Day on 27 January, Demnig installed 34 cobblestone memorials at various locations throughout Rome and replaced 20 stones that were stolen.

Stolpersteine can be found throughout the streets of European capitals, and are integral to ensuring that the names of those who once lived ordinary lives in those neighborhoods before being deported by the Nazis are never forgotten.

Young students affiliated with Axel Springer have also taken this memorial initiative in a digital direction. Two years ago, aspiring journalists of Axel Springer Academy in Berlin launched a digital project on Snapchat, ‘Sachor Jetzt!’, aimed at communicating the horrors of the Holocaust to the target group of 14-to 16-year-old users of the platform.

The project started in December 2016 when the group met with 94-year-old Holocaust survivor Margot Friedländer. ‘Sachor jetzt! Is a Hebrew-German portmanteau which translates as ‘Remember Now’. The term ‘sachor’ is often used among Jews within the context of the Holocaust.

The aim of the initiative was to communicate the experiences of Shoah survivors to younger audiences. The journalism trainees spoke to Holocaust survivors, met their children and visited concentration camps in preparation for the Snapchat project.