Central Council of Jews in Germany to WJC forum: The past won’t determine our future 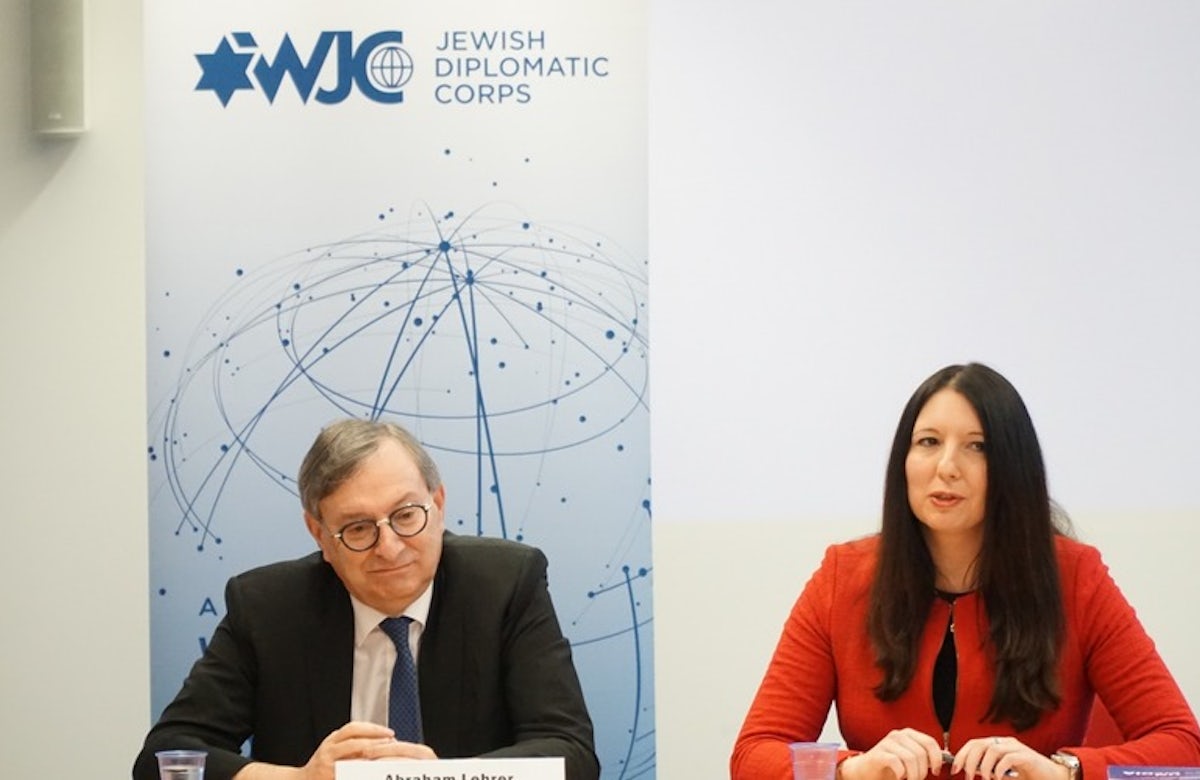 Berlin – The World Jewish Congress convened in Berlin earlier this month a regional induction meeting of its Jewish Diplomatic Corps (WJC JDCorps), bringing 45 members from 20 countries to engage in high-level diplomatic meetings at the German Ministry of Foreign Affairs, the German Federal Agency for Civic Education, and 14 embassies throughout Berlin.

The aim of the meeting was to induct new members of the program to learn about the objectives, structure and accomplishments of the WJC, and how to effectively conduct public diplomacy on behalf of world Jewry. 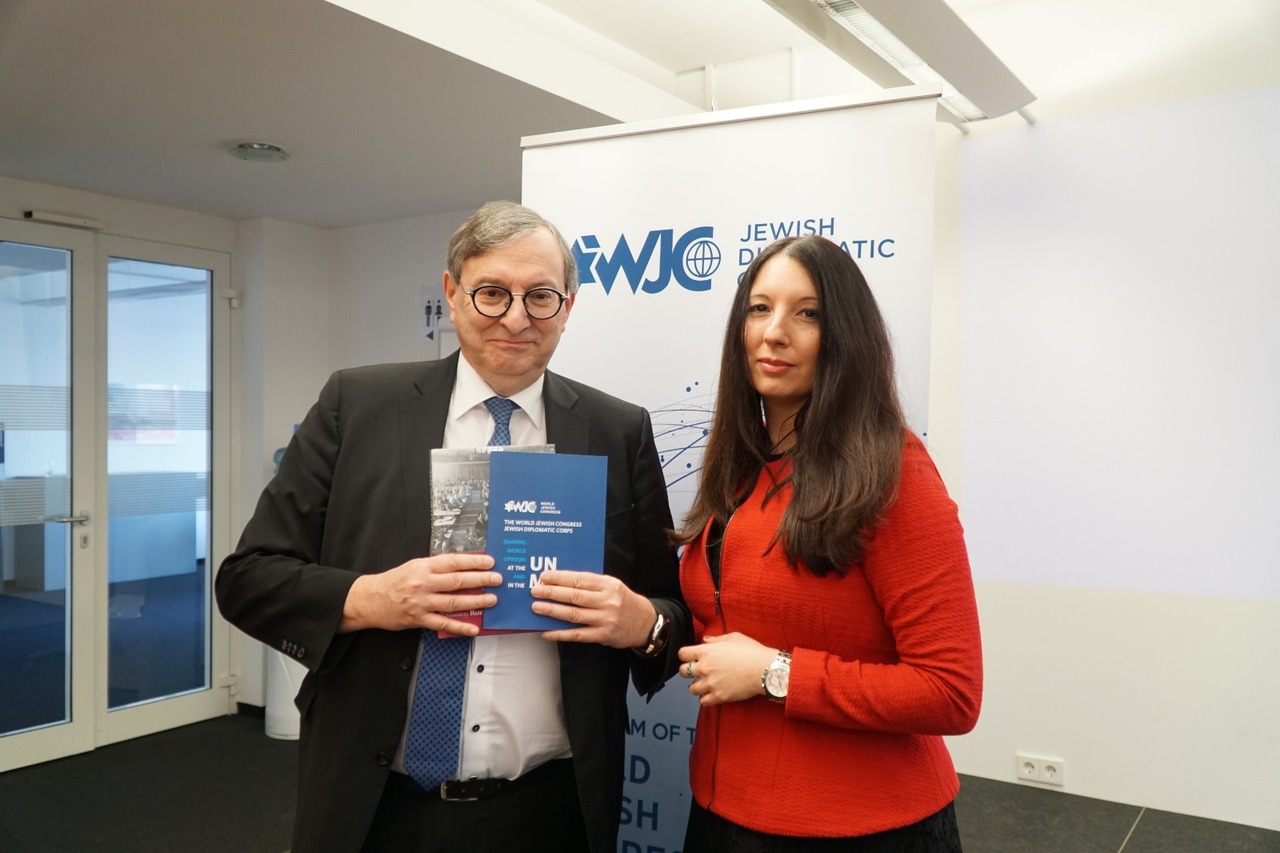 As part of their preparation ahead of their diplomatic mission in Berlin, the WJC Jewish Diplomats (JDs) were welcomed to Berlin by Vice President of the Central Council of Jews in Germany Abraham Lehrer who also briefed them on the challenges and opportunities for today’s German Jewry.

Below are excerpts from Mr. Lehrer’s address to the delegation:

It is with great pleasure to see such a talented and highly motivated group of young Jewish professionals that are united in a unique program, the flagship program of the WJC. The Jewish Diplomatic Corps is known for being an incubator for future Jewish leaders and for its ability to bring together extraordinary young people from 50 countries around the world. Young professionals like you are, who next to their high professional skills, share one thing – the most important thing: The unconditional commitment to the well-being of the Jewish people and the State of Israel.

The guiding principle of the World Jewish Congress and the leitmotiv that should lead us all is the Talmudic phrase: “Kol Israel arevim ze le ze” – “all Jews are responsible for one another.”

For me, the WJC JDCorps represents the implementation of this guideline. Through your voluntary engagement and your work, you committed yourselves to that mission statement.

And we all know that we need mutual support, solidarity and simply: to take care of one another – just like a big family.

I know from the German JDs as well that of course every JD-meeting is a special one. I would never doubt it. But I think that nevertheless a meeting here in Germany is something more than special. You all can imagine why. It is Germany’s history and the past of our Jewish people that pose a major reason for the need of having such a group like yours.

I am aware of the fact that coming to this country and in particular coming to Berlin as a Jewish delegation may be a visit with mixed feelings. Even though you belong to the third generation after the Shoa already, history is still present – most likely in Germany even more than anywhere else. But let me also say very clearly: The past WON’T determine our future!

The remembrance of the Shoa is a matter of course and a matter of heart to us! The barbarity that originated in and emanated from Germany, from Berlin 80 years ago will never be forgotten. We are carrying our six million brothers and sisters who were murdered in the Shoa in our hearts and minds forevermore. And neither will we let anyone else in Germany or worldwide forget what happened to our people and what human beings are able to do to others as soon as prejudices and hate prevail.

Again and again we must underline that antisemitism is not a Jewish problem alone, nor is the fight only up to us, the Jewish Community. Antisemitism is an attack on every democracy and on all our Western civilized values. It is an attack on human dignity and endangers our liberal constitutional order.

And let me also say at this point, that our thoughts and prayers are with the people in Israel that again suffer from an immense amount of rocket attacks and terrorism from Hamas and its allies that deliberately targets civilians, families and children all over Israel. It is high time for the world to wake up and to see who is responsible and to condemn these terror attacks in the strongest way possible and also should deploy consequences follow, like cutting off financial aid and support to various Palestinian organizations that misuse the money for terror activities.

But I don’t want this speech to sound too pessimistic, on the contrary: we here in Germany are everything but pessimistic.

And here is the reason why: Never before has the Jewish Community in Germany been so pluralistic and diverse. We have around 100.000 members of in total 106 Jewish Communities throughout Germany. Jewish schools have opened in the last 20 years, female and male rabbis are being trained and ordained again here.

There are Jewish cultural weeks, open house days, interfaith projects and a visible Jewish presence. Hebrew can be heard a lot especially on Berlin streets and a new sense of a strong Jewish self-awareness can be felt. With the immigration from the Former Soviet Union almost 30 years ago, with the coming of Israeli artists and tourists and of course with the preceding courage and confidence of the post-Shoa pioneers of Jewish life, we can call our community vibrant and dynamic again. And we are absolutely determined to safeguard a self-confident and secure Jewish future!

I’d like to conclude by quoting WJC President Ronald S. Lauder. He said addressing the WJC JDCorps: “With you as our next generation of leaders, I am more confident about the future than ever.”

I wish you a productive conference and a great stay in Berlin!

Thank you very much.