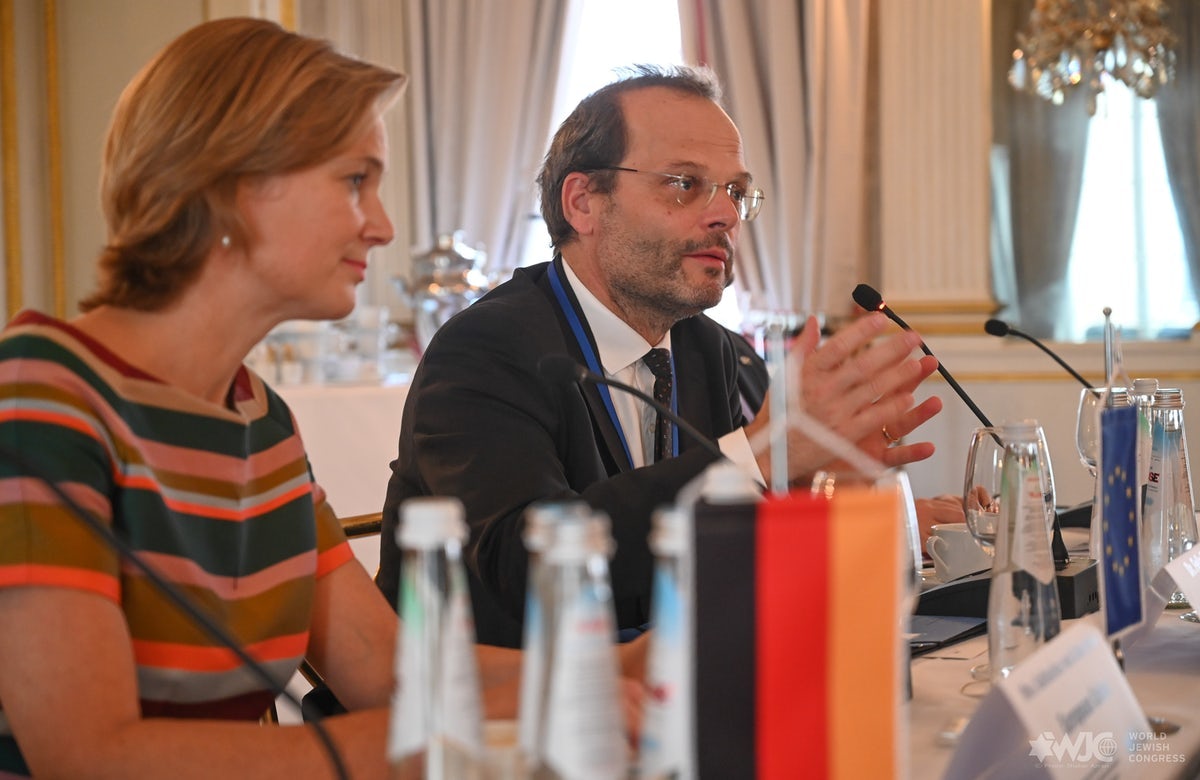 Germany’s Commissioner for Jewish Life and the Fight against Antisemitism Felix Klein sat down recently for an exclusive interview with the German public-broadcasting radio station Deutschlandfunk to discuss how schools can become a part of the fight to combat antisemitism and bigotry.

Deutschlandfunk’s Kate Maleike: 9 November is a day steeped in history for Germany. On this day in 1938, synagogues were torch in the Reichspogrom [Kristallnacht], a night which we all know was the harbinger of the Holocaust. What do you think about schools today?

Felix Klein: Schools should take this day as an opportunity to reexamine the complete failure of German society in 1938, and ask how we would deal with discrimination, exclusion and, of course, hatred of Jews today. What conclusions should we draw from the events of that time for our actions today?

Maleike: There is a need for action, because hostility toward Jews is also on the rise in our schools. How does this materialize, and what do we know about it exactly?

Klein: The word “you Jew” has unfortunately degenerated into a curse word in many German schoolyards. We observe that Muslim schoolchildren do not want to come to class when the Holocaust is to be discussed, and there are also absolutely unacceptable chats taking place among school groups. For example, a picture of Anne Frank being disseminated alongside an advertisement for frozen pizza, declaring “fresh from the oven.” Teachers are often not equipped to deal with such antisemitic incidents.

Maleike: There is an obligation to report antisemitic incidents in schools, but not in every federal state, although you have been calling for this for a long time. Why aren’t the regulations uniform?

Klein: That is because of federalism in Germany. Education and schools are matters relegated to the individual states, not the federal government, so that each of the states deals with education independently. However, I really believe that mandatory reporting would be appropriate in all federal states. The experience in those federal states where obligatory reporting already exists has shown that such incidents are then used as an opportunity to discuss antisemitism openly. Moreover, there is no discussion at all about whether such incidents should or should not be reported, and also no discussion about reducing this to a process between perpetrators and victims; the entire school community becomes involved. As I stated, the experiences and the conclusions that we can draw from states with obligatory reporting processes are very good.

Maleike: There must be no tolerance for any hatred or hostility. In view of the recent Islamist attacks, Federal Family Minister Giffey has now demanded that the schools take action against Islamism, which means that something must happen even in schoolyards. You have just spoken of teachers - how do you suppose that teacher training could adapt to this topic?

Klein: On the one hand, I think it is important that we oblige teachers to visit a memorial during their training so that they become better acquainted with the history. It must be compulsory to understand the genesis of the State of Israel, because the antisemitism that is widespread in schoolyards today is often related to the creation of the State Israel. Jewish students are also often blamed for what happens in Israel, which is unacceptable and antisemitic. Teachers should also be aware of the legal situation. They should recognize antisemitism as such - prosecution of antisemitism often fails because it is not recognized as such, and that must change. Teachers should also be able to know and demand their rights, as well as support from their school administrators and authorities. To do this, they also need to know the legal requirements, of course, and that should be the subject of teacher training.

Maleike: When we were just talking about mandatory reporting, you mentioned federalism, which makes different regulations possible in the different states, and how this applies to teacher training. How can we ensure that it becomes a mandatory component of teacher training throughout Germany?

Klein: I think we must make it a prerequisite for the examination to obtain a teaching license, so that dealing with racism and antisemitism becomes a subject that is relevant to the examination. I think there are some institutes in Germany that could also provide training modules for this; all teacher training institutions could then request these. And again: It is very easy to make this a requirement for admission to the second state exam for the teaching license.

Maleike: School material, textbooks, we haven't talked about that yet. What would have to be changed there, from your point of view?

Klein: Unfortunately, Jews are often only portrayed as victims. The history of antisemitism is only conveyed when the Holocaust is the topic in history class - that must change. We must emphasize that Jewish life has always belonged to Germany, that it is an integral part of German history, that Jews also contributed to the strength of our country and that Jewish life continued to exist after 1945.

Unfortunately, in school textbooks, it is often presented as though the history of antisemitism - and also Jewish life - came to an end in 1945, but this reality did continue, and that must be acknowledged. The theme year “Jewish life,” which we will be celebrating next year offers a good opportunity because there will be a number of events and initiatives that will make Jewish life more visible and many people will be surprised to realize, I think, just how much Jewish life has shaped Germany.

Maleike: We have now talked a lot about deficits in schools, but is there anything positive about what German schools are doing with regard to antisemitism or the culture of remembrance that you can think of in particular?

Klein: I think what is going well is that people in schools are recognizing that antisemitism affects not only the Jewish community, but all of us and that we are addressing not only the Jewish community with all of our projects and activities – though they are of course the first to be affected. Part of the work involves deconstructing stereotypes and antisemitic prejudices especially among the non-Jewish population; succeeding in this would be a very good first step.

I am always delighted to hear about very, very committed teachers who are also breaking new ground, for example by participating in school exchanges with Israel, providing information about Israel and otherwise making it clear in an interactive manner that, for example, people of migrant background must absolutely be included and that bridges also have to be built with regard to the culture of remembrance in the countries of origin. As I said, there are very good approaches, and I would like to reinforce them.