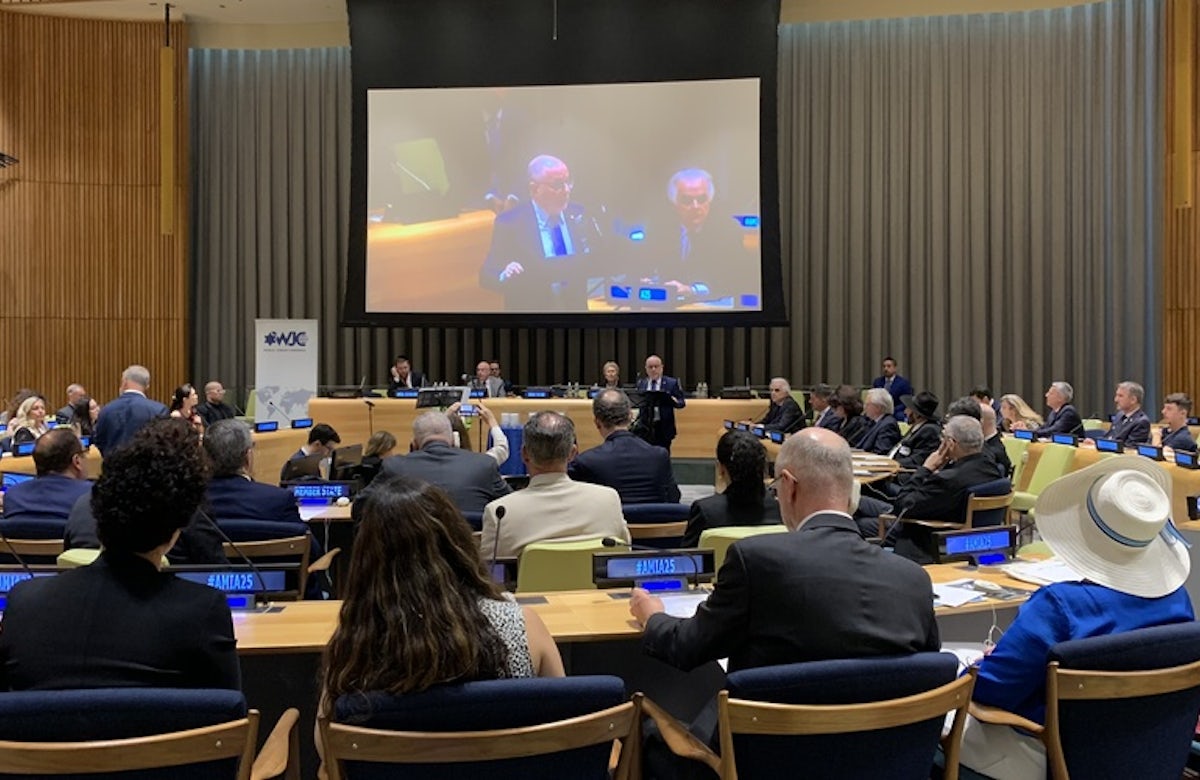 NEW YORK – The World Jewish Congress, the Permanent Mission of the Argentine Republic to the United Nations, and the Jewish Community of Argentina held a special commemoration at the UN headquarters in New York on Monday to mark the 25th anniversary of the deadly 1994 terrorist attack on the Asociacion Mutual Israelita Argentina (AMIA) Jewish Center in Buenos Aires which claimed the lives of 85 people and wounded hundreds more.

The commemoration was part of a series of more than 20 such events being held in major cities across the world, including Rome, London, Madrid, Geneva, Paris, Berlin, and Moscow, among others. The series of commemorations opened in Santiago on June 4, and will continue through July 18, culminating with an official ceremony in Buenos Aires.

The session was moderated by Martin Garcia Moritan, Permanent Representative of Argentina to the UN, who emphasized: “The biggest service that we can do to victims of terrorism is keeping the memory alive and the fight for justice.”

In his address to the dozens gathered in the Trusteeship Council, Argentine FM Faurie said: “On the one hand we are keeping the memories of the victims alive, but we are also here to demand justice… the attack against AMIA was not only a strike against the Jewish community, but against the people of Argentina, freedom and democracy.” Argentina is committed to combating and eradicating hatred, the foreign minister said, adding, “we need to fight against antisemitism with tenacity.”

WJC North America Chair Sommer recounted her own experience as a native of Argentina, as a member of the thriving Jewish community. “Argentina gave hospitality and shelter to the persecuted Jews of the 20th century… that hospitality, that shelter that Argentina gave us was shattered 25 years ago with the destruction of the AMIA bombing.” Sommer noted that the AMIA attack, although the deadliest terrorist incident in Latin American history, came on the heels of a similar bombing of the Israeli Embassy in Buenos Aires two years prior. Both attacks are evidenced to have been carried out by Hezbollah terrorists, masterminded by Iran. “I stand here today requesting from the Argentina government to call for Iran and its proxy, Hezbollah, to be brought to justice.”

AMIA President Eichbaum told the audience that today, 25 years following the attack, “we stand stronger than ever… translating the universal values of Judaism into action.” Evoking the biblical phrase, “justice, justice, you will pursue,” Eichbaum added: “This is what brings us here today.”

President of the General Assembly Espinosa said in her address, “we must strengthen our collective response to this scourge that knows no borders. It is fundamental that we focus on the deep-seated causes of violent terrorism…. Intolerance only feeds fear and divides us all.” It is with this in mind, Espinosa said, that the General Assembly will hold a special assembly on Wednesday on Combatting  Anti-Semitism and Other Forms of Racism and  Hate. “We must promote tolerance, respect, and a culture of peace,” she said.

On Thursday, the Consulate General and Trade Centre of the Argentina Republic will open a photography exhibition in midtown Manhattan featuring images from the aftermath of attack.

In his address to the ceremony, WJC Chief of Staff Radomski said: "The AMIA bombing is a tragic example of the murderous ambitions of Hezbollah. The international community must never forget the threat posed by this terror group and we call on all countries to designate Hezbollah as a terrorist organization.

"Unfortunately, terrorism and indiscriminate attacks against the Jewish and other minority communities are flourishing worldwide. In order to deal with this global surge of violence, governments must protect their Jewish communities and provide enough funding to ensure that their security needs are met. Today, we must send an unequivocal message that these types of crimes will never be tolerated, and we must do everything in our power to prevent and stop them," Radomski said. 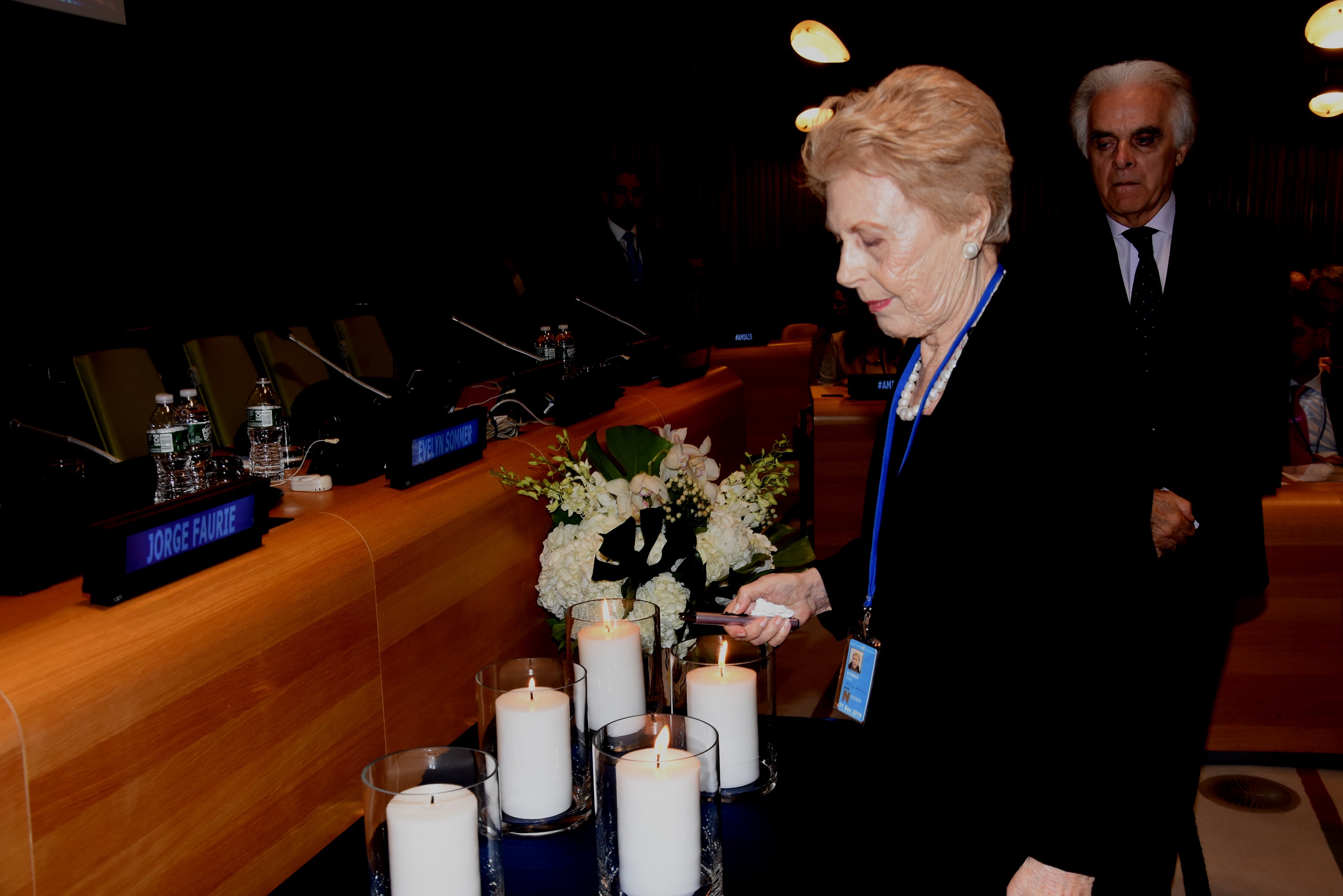 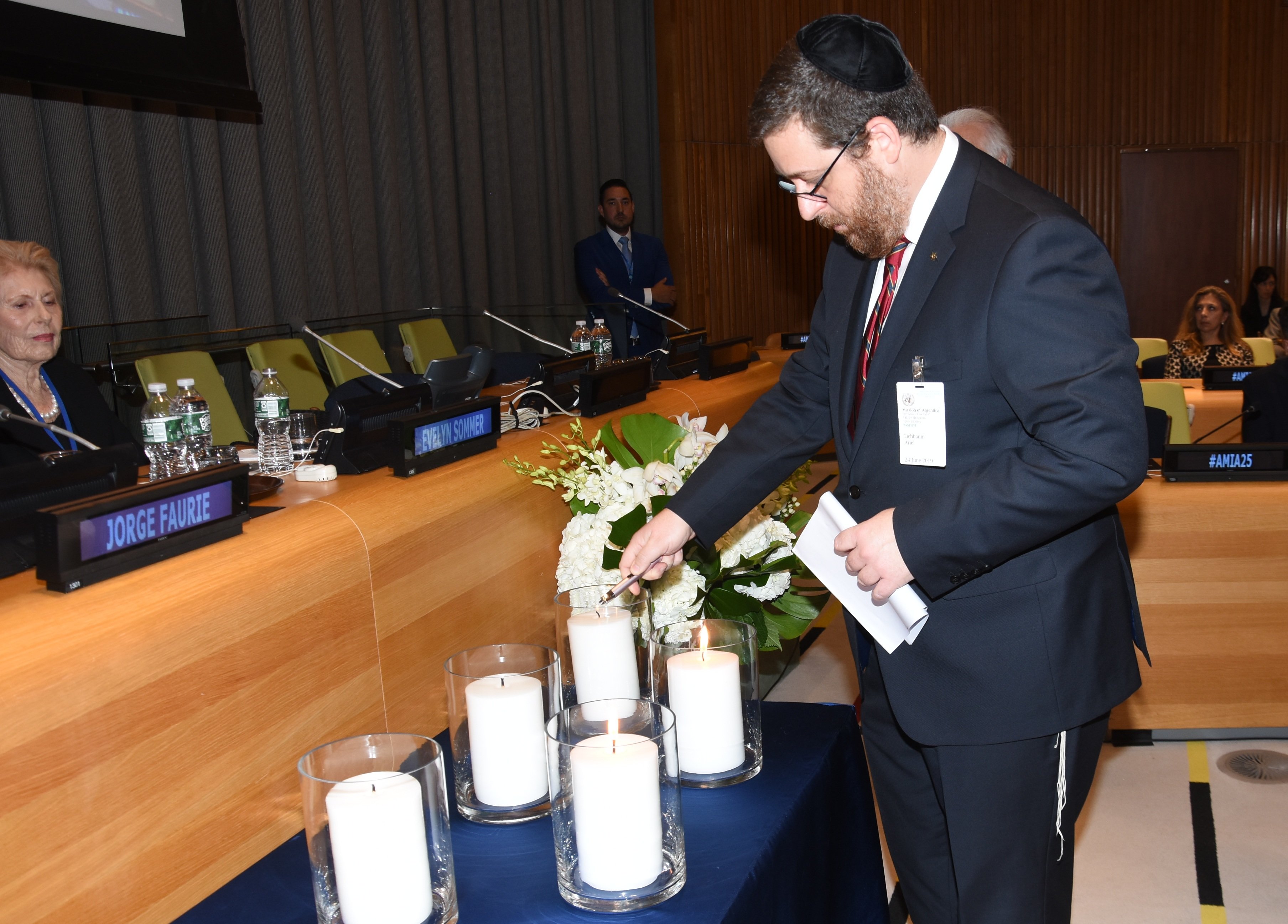 Ariel Eichbaum, President of AMIA, lights a candle in memory of the victims of the 1994 bombing. (c) Howard Wechsler / World Jewish Congress 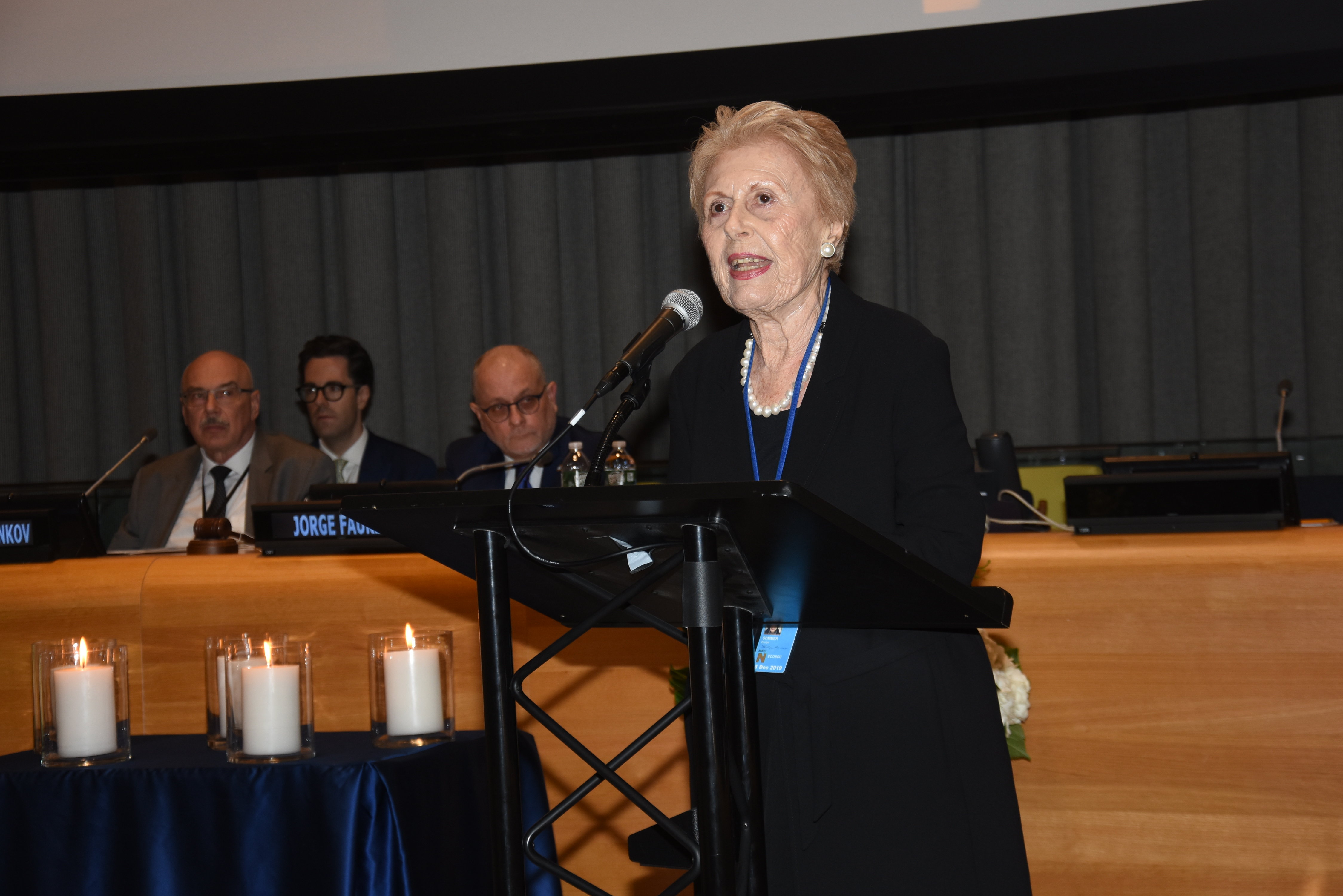 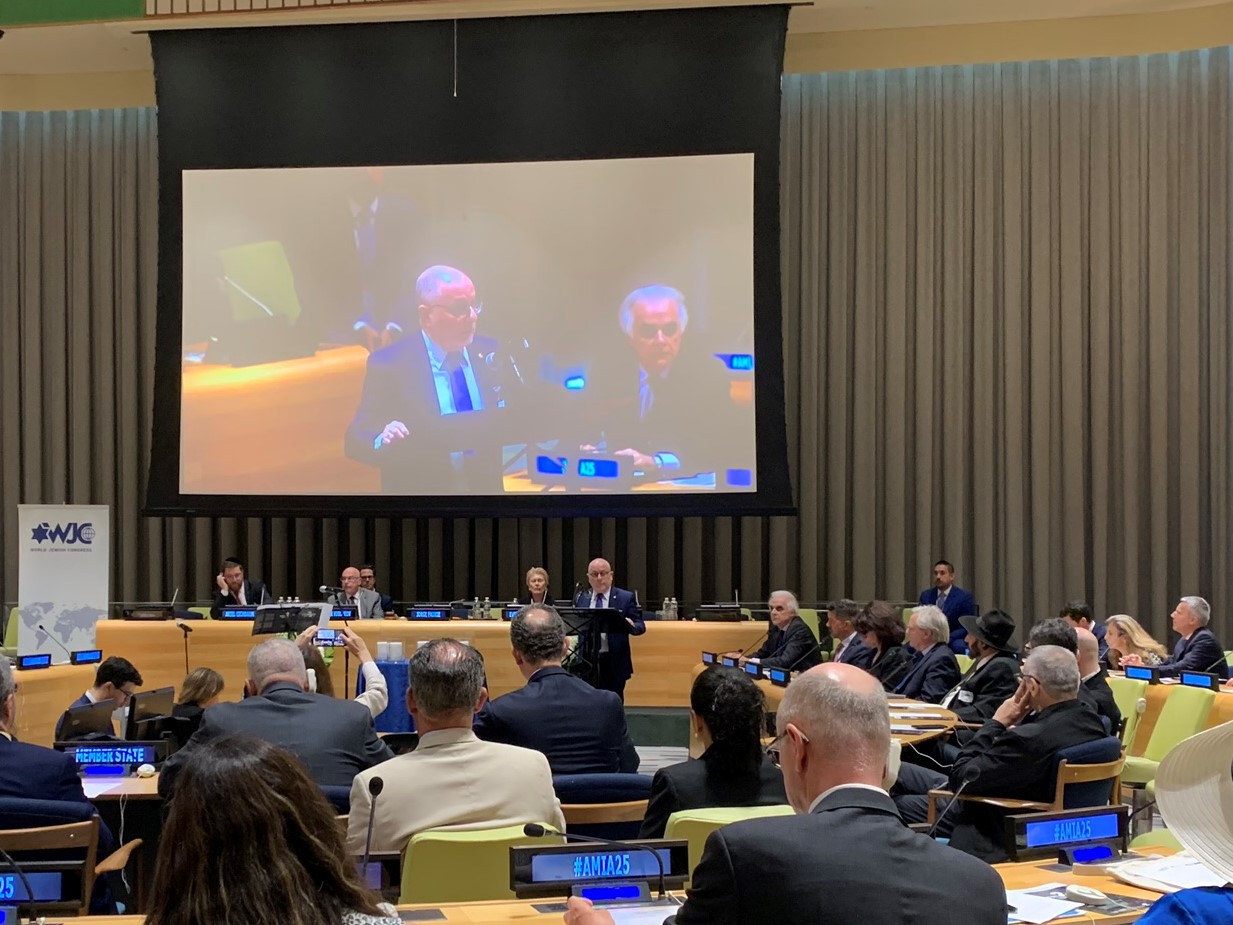