The World Jewish Congress and the Permanent Mission of Rwanda to the United Nations on March 26 honored Father Patrick Desbois with the first Raphael Lemkin Award for exemplary work in the fight against genocide in honor of his dedication to investigating and exposing crimes of genocide around the world.

Father Desbois is the founder and president of Yahad–In Unum, a global humanitarian organization established in 2004 with the goal of identifying and commemorating the sites of Jewish and Roma mass executions in Eastern Europe during World War II. The award ceremony took place at the UN headquarters in New York at a special event in memory of Lemkin, the Polish-Jewish lawyer and refugee who coined the term “genocide” and initiated the Genocide Convention 70 years ago. 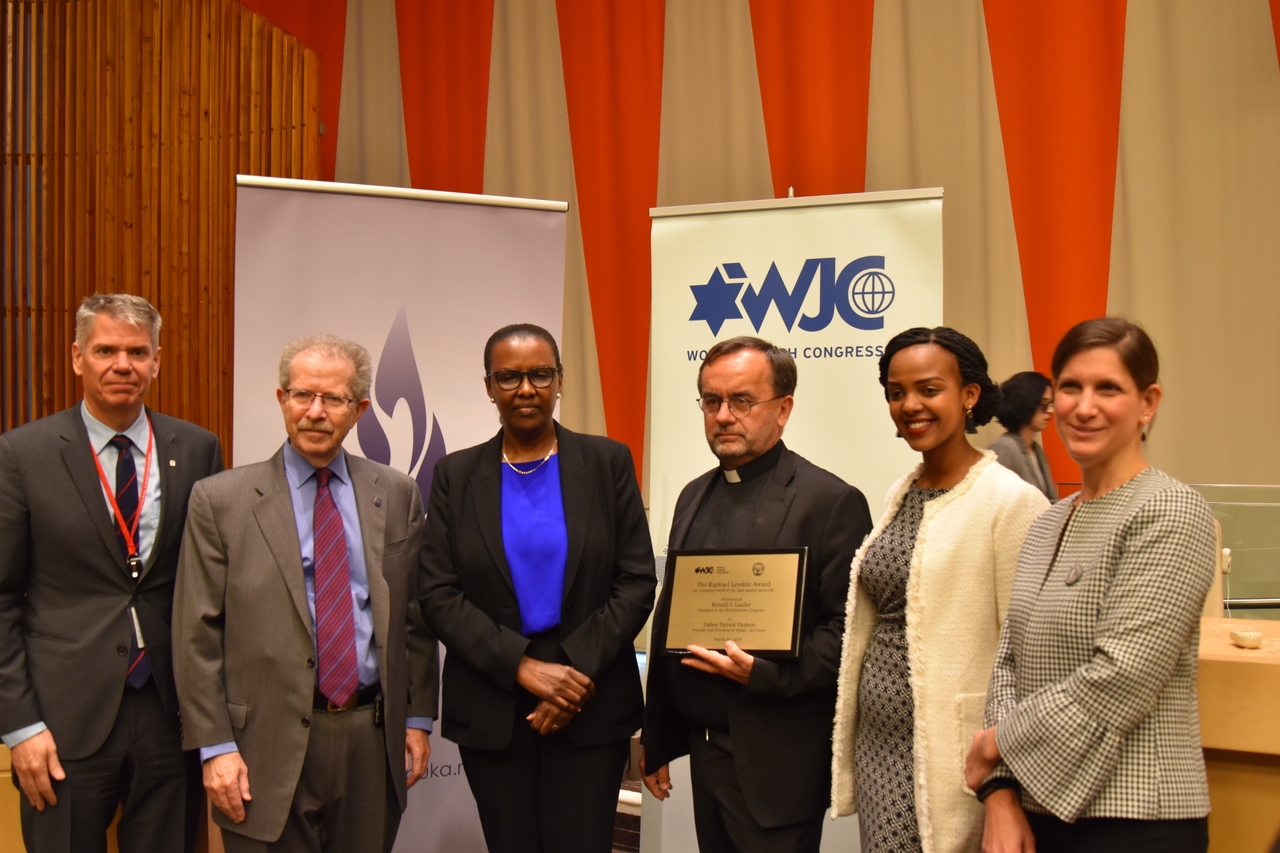 The award was presented on behalf of WJC President Ronald S. Lauder by Adam Hummel, a member of the WJC Jewish Diplomatic Corps, “In the same way that Lemkin sought to name a crime that did not yet exist, Father Desbois has sought to find and name those victims whose lives were cut short by the perpetration of that very crime. In these ways, Father Desbois’s work is a very real extension of what was started by Lemkin.”

In accepting the award, Father Desbois warned that “genocide is not only a hate crime…. There are no pure antisemites or pure hate groups.” With every genocide comes also rape, the looting of property and money, and ideology, he said. Moreover, “there is no genocide without neighbors,” Father Desbois said, recalling among other stories a Yazidi child he interviewed recently who was turned into ISIS by his six-year-old best friend, and the barbaric behavior of Nazi collaborators who would lay tables filled with sandwiches and tea, as though it were just another day, while carrying out the mass shootings of Jews during the Holocaust.

“The first thing we must do during a genocide is act. We must act,” Father Desbois said. In the case of a genocide, the first question is not “where was the United Nations? But, where were you yourself? And we will have to answer.” 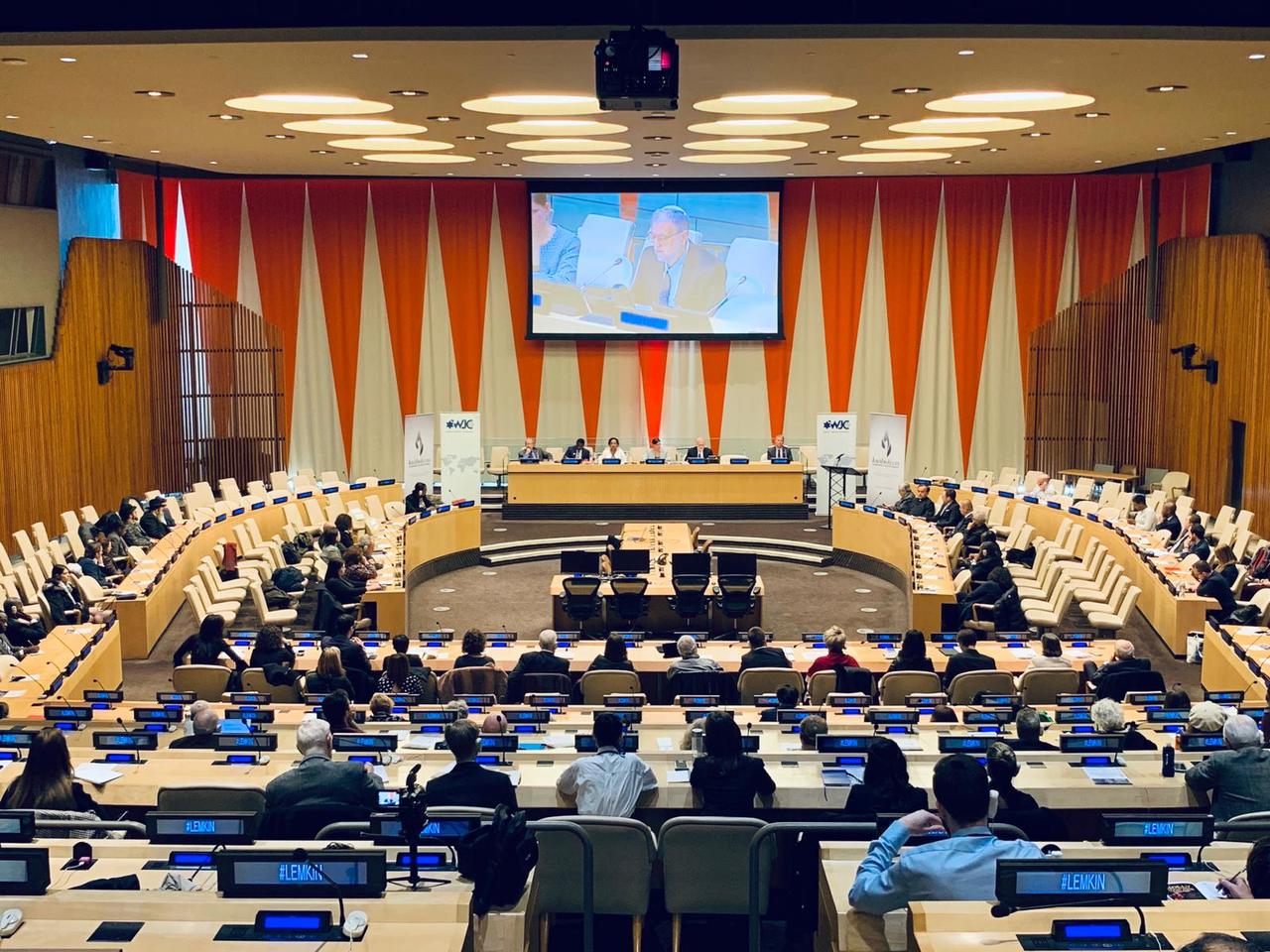 Ambassador Valentine Rugwabiza, the Permanent Representative of Rwanda to the United Nations honored Lemkin's legacy, saying, "his passion, his belief in humanity, and his commitment should serve as an inspiration to us all. She also praised Father Desbois, saying, “I can’t think of a more deserving awardee for the first Raphael Lemkin Award than yourself. By reminding us all there is no genocide without the participation of neighbors, it means that there is also no prevention of genocide without the active involvement of neighbors. Let us all strive, on the individual level and in groups, to be that neighbor that does not stand by. Let’s strive to be that neighbor that will take a stance.”

In less than two weeks Rwanda will mark 25 years since the 1994 genocide against the Tutsi, in which more than one million people were massacred, Rugwabiza said. The weak response to this genocide, already 46 years after the ratification of the Genocide Convention, "left us in shock and disbelief," Rugwabiza said. "What value is the Genocide Convention if it does not inspire, or indeed compel the world to stop genocides? Would an enforcement mechanism strengthen the convention? Does the UN Security Council urgently need reform to ensure that the decision of a few powers don't determine the lives of millions who have no say? And let's not forget the issue of justice after such mass atrocity. Our current system of international justice is wanting... what needs to be done to avoid such abuse of the mechanisms of international justice? How can we ensure that the voices of survivors are taken into account in international criminal proceedings?

As part of the event, a panel of experts on genocide – including a survivor of the 1994 genocide of the Tutsi in Rwanda – discussed the implications of learning from the past and working to prevent future genocides and crimes against humanity.

Panellist Liliane Pari Umuhoza, a child survivor of the genocide in Rwanda who has worked with other survivors over the years, elucidated that “the current challenges facing survivors are trauma. It’s been 25 years, and people tend to forget or think that maybe with time it gets better, but healing and time are two different things.” For survivors, the genocide is as clear as yesterday, she said. “So how can we prevent those horrors from happening again? We must eradicate the culture of impunity,” she said, and work against the denial of genocide, which is a “form of victimization.”

“It’s time we act because when we act, we save lives… it’s important for the UN and other international organizations to use their influence to make ‘never again’ a reality. Only through collective and consistent efforts can these dreadful crimes be prevented,” Umuhoza said.

Menachem Rosensaft, General Counsel of the World Jewish Congress who teaches about the law of genocide at the Columbia and Cornell law schools, spoke on the panel on the limitations of the definition of “genocide” within the greater context of crimes against humanity and war crimes, and the historic controversy and discrepancies over the Genocide Convention prior to its adoption in 1949. Despite the pandemonium, Rosensaft said, “I submit that [the Genocide Convention] was adopted at a moment in history when it seemed impossible for the international community to avoid doing so. Were it to come up for consideration or reconsideration today, I have my doubts as to its fate. For better or worse, however, and in the words of an overused contemporary cliché, it is what it is, and we must grateful that we have it at all.”

The other panellists at the event on Tuesday included Professor Yehuda Mirsky, of Brandeis University; Chris Harland, Legal Advisor to the Permanent Observer Mission of the International Red Cross to the United Nations; and Castro Wesamba, the head of office at the UN Office of the Special Adviser on the Prevention of Genocide. The panel was moderated by Yfat Barak Cheney, Senior Manager of International Affairs for the World Jewish Congress.