Yiddish language and culture are an integral part of the spiritual heritage of the Jewish people. For about 800 years, Yiddish was the spoken language of the majority of European Jews and Jewish immigrants to other counties. In fact, it was the language of two-thirds of the Jewish people prior to 1939. Until World War II, Yiddish culture thrived, producing a vibrant folklore, literature, music, theater, film and media. 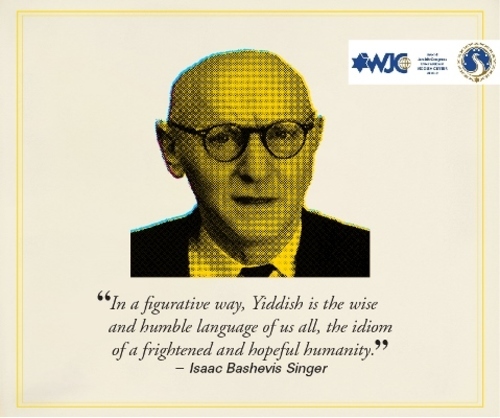 The World Jewish Congress Yiddish Center attaches great importance to the preservation and recognition of cultural treasures created in Yiddish and to the continuity of Yiddish language, learning and research. The center is also devoted to the creation of new literary, musical and theatrical work in Yiddish.

Vilnius, otherwise called Vilna, was one of the main centers of Eastern European Jewish and Yiddish culture, known as the ‘Jerusalem of the North’, a place of Yiddish education, journalism, literature and theater. YIVO -- the first academic Institute for Yiddish research -- was established 90 years ago in Vilna. There are few places in the world more suitable for the revival of Yiddish culture and language than Vilnius.

The new center is to offer intensive short seminars, summer schools and the systematic study of the Yiddish language through (online) distance -learning. Its target audience are teachers, Jewish educators, college and university students, Jewish communities, Jewish cultural leaders and the wider public.

Special emphasis will be placed on inculcating values ​​of Yiddish culture in Jewish education, by emphasizing five main elements:

Accordingly, we turn to Jewish organizations world-wide, to Jewish education systems, students from higher education institutions, and to all those share a passion for the beauty and sadness of Yiddish to engage with the new WJC Yiddish Center, in Vilnius and around the world.

We appeal to you, in the spirit of Isaac Bashevis Singer who upon receiving the Nobel Prize in Literature in 1978 said:

“Yiddish has not yet said its last word. It contains treasures that have not been revealed to the eyes of the world. It was the tongue of martyrs and saints, of dreamers and Kabbalists - rich in humor and in memories that mankind may never forget. In a figurative way, Yiddish is the wise and humble language of us all, the idiom of frightened and hopeful Humanity.”