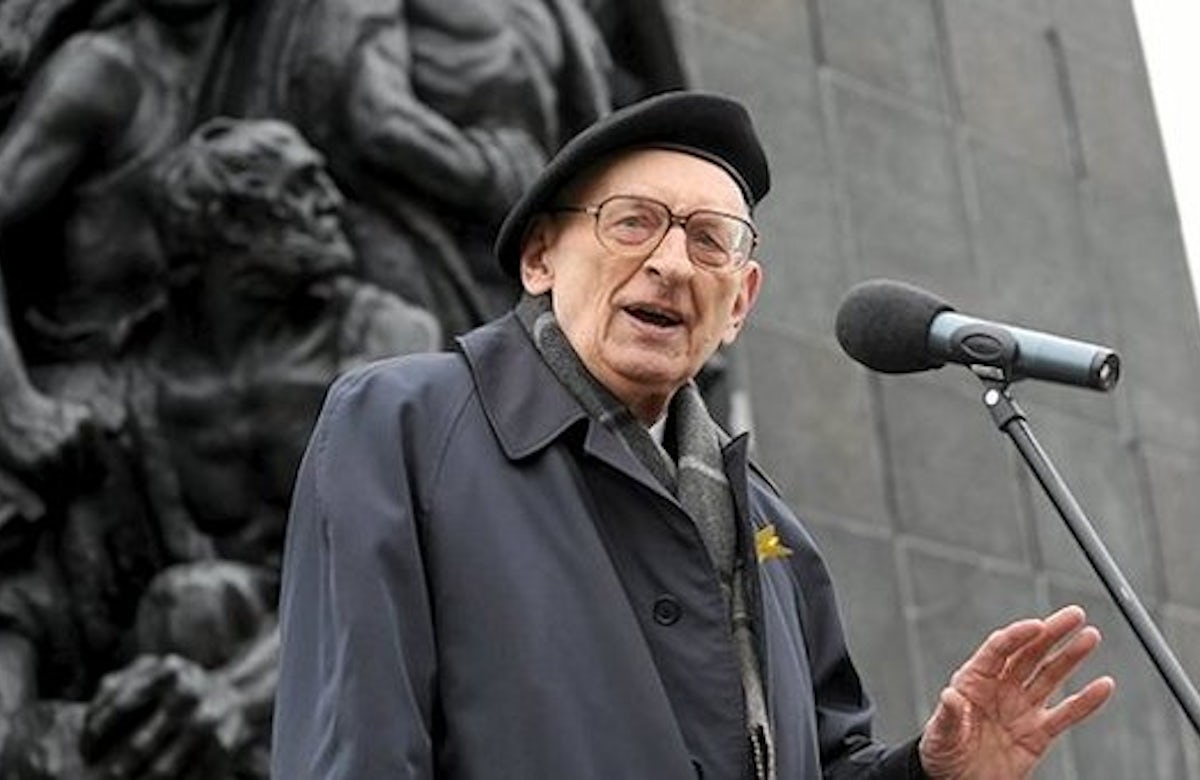 At a state funeral in Warsaw attended by world leaders, including European Council President Donald Tusk and German President Joachim Gauck, Wladyslaw Bartoszewski, Poland's former foreign minister and an Auschwitz prisoner who helped save Jews from the Holocaust, was laid to rest on Monday. 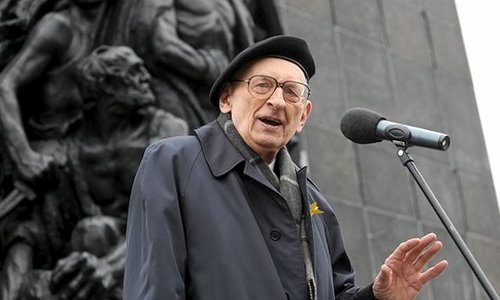 Bartoszewski, a historian, writer and politician, had passed away on 24 April at the age of 93.

A member of underground World War II resistance, Bartoszewski helped save Jews from the Nazi onslaught. He was later persecuted under communism for his democratic views. He served twice as democratic Poland's foreign minister, and until his death served as deputy minister for dialogue with Germany and Israel.

Bartoszewski was made an honorary citizen of the State of Israel and recognized as Righteous Among the Nations by Yad Vashem.

He was buried at Warsaw's Powazki cemetery.

The following obituary written by the WJC's Laurence Weinbaum was first published by 'i24 News' on 3 May 2015.

The legend that was Wladyslaw Bartoszewski

All people need heroes - men and women whom we can admire and from whom we can draw inspiration. As the recent past is painstakingly deconstructed by the iconoclastic historians who have undertaken this often thankless task, we find ourselves with fewer and fewer idols. Certainly one whose legacy of heroism will continue to guide us is Professor Wladyslaw Bartoszewski, the grand old man of Polish democracy and diplomacy, who died recently at 93, and whose life was akin to an allegory on the vicissitudes of the contemporary history of Poland.

In Israel and the Jewish world, Bartoszewski will best be remembered for his role in the wartime rescue of Jews as one of the organizers of Zegota (the Council for Aid to Jews) which was established in 1942 and operated as an arm of the Polish Government-in-Exile.

In 1939, at the beginning of the terrifying German occupation that ravaged Poland, he was mistaken for a Jew and found himself assigned to a Jewish forced labor detail. Another young Pole in a similar predicament went up to one of the Germans and showed them the Catholic medallion around his neck, declaring that he was kein Jude [not Jewish]. Bartoszewski wore something similar but recalled years later that while he couldn’t criticize his Catholic compatriot for doing what he did, it didn’t occur to him to use his own talisman that way. “It wasn’t because of any philosophical consideration, but rather a reflexive reaction of solidarity and decency.”

Caught in a lapanka [round up] in September 1940, Bartoszewski landed in Auschwitz, one of the first inmates (no. 4427) of what was then a little-known German concentration camp. Miraculously, in the spring of 1941, before Auschwitz became the epicenter of the Final Solution, he was released thanks to the intervention of the Polish Red Cross for whom he had worked in Warsaw. Upon his return home, Bartoszewski immediately enlisted in the Polish underground.

Along with like-minded Poles who believed, even if they were not necessarily philo-Semites, that a monstrous crime was being committed around them, Bartoszewski risked his life to bring aid to Jews targeted for destruction. He did that despite the prevailing ambiance in Polish society under German occupation, which was hardly supportive of the imperiled Jews.

Raised in a predominantly Jewish neighborhood of pre-war Warsaw and an eyewitness to the merciless destruction of the people he had grown up among, he became a passionate and unremitting advocate of Polish–Jewish friendship and solidarity, devoting much of his life to that cause. On the very morning of the day of his sudden death he explained that on doctor's orders, he had been compelled to cancel his plans to travel to Israel to participate in an event to mark the 25th anniversary of the resumption of Polish-Israeli diplomatic relations.

After the war, his commitment to a free Poland in which people could live in dignity earned him a place in a prison cell on fabricated charges of espionage for the West. Many years later, when discussing some nonsense that had crept into the Polish political discourse, he stressed that he had spent time in jail precisely so that people would have the right to utter such stupid things.

As an educator and prolific author, Bartoszewski sought to teach the uncensored history of Poland at a time when that, of course, was a very risky proposition. Understandably, he always sought to draw attention to the story of Polish rescuers who, he believed, had written an especially glorious page in their nation's history. But beyond being a pillar of the resistance to Communist rule, Bartoszewski instilled in Poles the notion that jingoism or intolerance should not be confused with true love of one’s country, and that a society that gives way to its basest instincts is doomed to ruin.

He was a God-fearing Christian in the truest sense and was especially proud of the honorary citizenship the Jewish State had bestowed upon him and the recognition he had received from Yad Vashem. It is a reflection of his own moral fiber and transcendent magnanimity that after suffering horribly at the hands of Germans, he was a pioneer in post-war Polish–German reconciliation and is today deeply mourned in Germany.

Bartoszewski went on to become a living legend, a larger-than-life symbol of Poland’s long and glorious tradition of liberalism and justice—which is neither well known outside its borders nor always appreciated within them. He was a man of uncompromising principles who always believed that decency was a supreme value. He lived by that credo throughout contemporary Poland's tempestuous and tragic history of war, occupation, revolution, dictatorship and authoritarianism.

After the collapse of the pyramid of deceit and corruption that was the Communist system, he served his country in a variety of official posts, including senator, ambassador to Austria, and two stints as foreign minister.

His stirring, emotional speeches, delivered in rapid-fire Polish (to the consternation of simultaneous translators), were often imbued with exhortations to morality but also pithy humor. "It is worth being honest," he famously declared, "though it doesn’t always pay. It actually pays to be dishonest - but it’s never worth it.”

“Life,” he said, “doesn’t have to be easy, but it's much worse if it's boring.” His was anything but.

The Scriptures tell us that the Children of Israel were counseled: "When thou goest into battle against thine enemies and seest horses and chariots and a people more than thou, be not afraid; for the Lord thy God is with thee... Let not your hearts be faint, fear not and do not tremble." Bartoszewski would not have been human had he not been afraid, but he was never faint and he never trembled—even in the face of unimaginable evil and widespread demoralization.

For those of us who sincerely love Poland - its warts notwithstanding - a great moral authority has left us. When asked by the journalist Michal Komar why he had done what he had - risking his life on behalf of Jews - Bartoszewski answered, “Because I could not have done otherwise.” That, perhaps, is the most telling expression of the greatness of Wladyslaw Bartoszewski.

Laurence Weinbaum is the director of the Israel Council on Foreign Relations, which operates under the auspices of the World Jewish Congress and chief editor of The Israel Journal of Foreign Affairs. Together with historian Dariusz Libionka he is the co-author of a book on the history of the Warsaw Ghetto Uprising, published by the Polish Center for Holocaust Research in Warsaw.