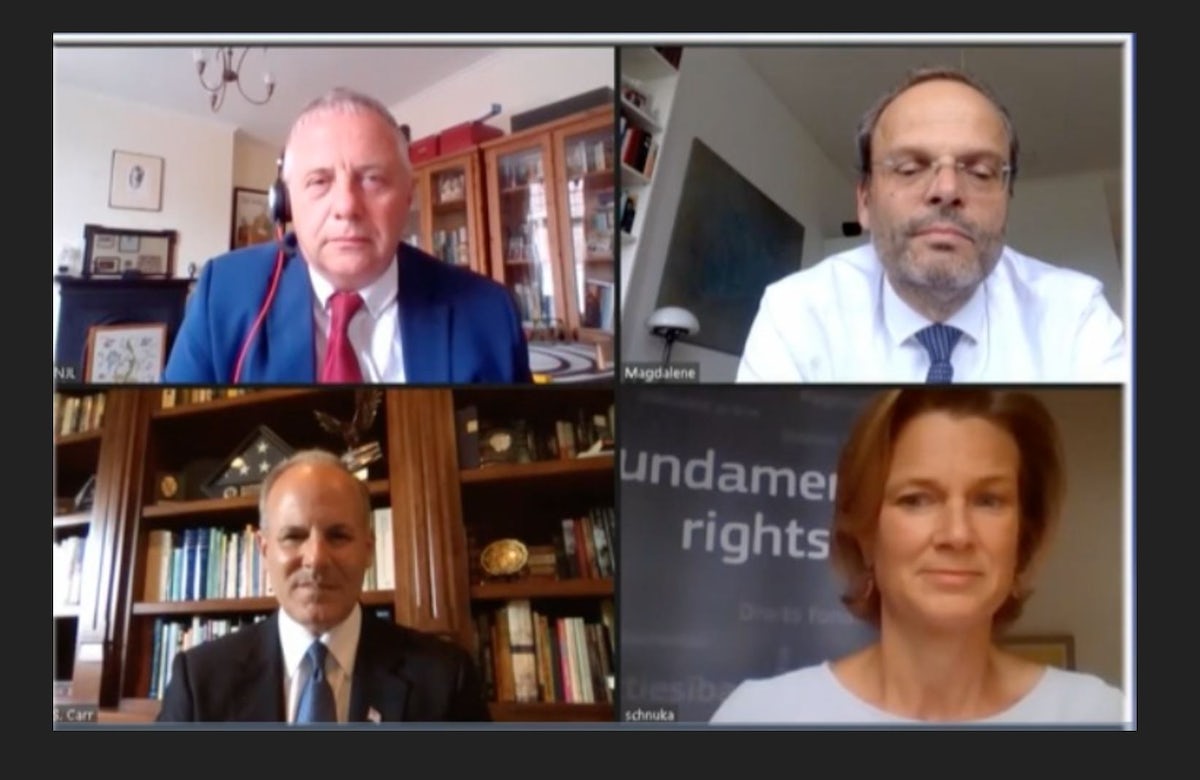 During a special broadcast of the Jerusalem Post on 1 July, under the banner 'COVID-19 and the Jews: Challenges and Opportunities’, the World Jewish Congress called for a “renaissance of Jewish solidarity” as the pandemic continues to affect our world. Representing WJC President Ambassador Ronald S. Lauder at the virtual conference, WJC Associate Executive Vice President Menachem Rosensaft emphasized the crucial importance of Jewish unity among communities across the globe in response to the universal impact of the pandemic.

In opening remarks, Israeli President Reuven Rivlin said he was “certain that [Israel] must take care of all members of society, especially those hit in the hardest way. This is what makes [Israeli] society so strong. All nations must increase cooperation in science, technology, and medicine. The coronavirus knows no border.” Concerning the Jewish Diaspora, Rivlin added that, “the State of Israel must do all that it can to support Jewish communities around the world.…we are one family. Despite the distance, we feel closer than ever.”

Chairman of the Jewish Agency Isaac Herzog spoke of the “staggering impact” that COVID-19 has had on the Jewish world, “because Jewish life is dependent on connectivity, on events, on minyan. The fact that communities are totally paralyzed is horrendous.”

On behalf of Ambassador Lauder, Rosensaft noted that, “The Covid-19 pandemic has been a challenge for Jewish communities for at least two reasons: first, it is, in Ambassador Lauder’s words, a ‘worldwide calamity’ that has affected and continues to affect people across the globe, regardless of nationality, ethnicity or religion, and it is definitely not a threat directed specifically or even primarily against Jews. In that respect, the Jewish people is truly an equal part of humankind as a whole.”

Rosensaft went on to quote Ambassador Lauder’s reminder in a recent Jerusalem Post article that, “the virus does not differentiate between ultra-Orthodox and Reform Jews. The economic implosion hurts liberals and conservatives alike. And the imperative to nurture a strong, unified Jewish community grows exponentially in the face of the dangers surrounding us. Now is the hour for unity and harmony, for a renaissance of Jewish solidarity.”

Stressing the importance of “enabling Jewish communities to work together, to brainstorm, to consult, and to share experiences and best practices,” Rosensaft noted that, “over the course of the past three-and-a-half months, under Ambassador Lauder’s leadership, the World Jewish Congress has brought together our leadership as well as the national directors of our more than 100 affiliated communities in a series of virtual Zoom meetings that has enabled us all to feel not only connected as never before, but strengthened by one another.”

A panel featuring European Commission Coordinator on Combating Antisemitism Katharina von Schnurbein, US Special Envoy to Monitor and Combat Anti-Semitism Elan Carr, Commissioner for Jewish Life in Germany and the Fight Against Antisemitism Felix Klein, and LK Advisor to the Government on Antisemitism Lord John Mann, followed with a focus on whether antisemitism is indeed on the rise in 2020.

Von Schnurbein, who serves as co-chair of WJC’s Special Envoys Combating Antisemitism (SECCA) forum, underscored the European Union’s relevance and added value in the fight against antisemitism, noting that policy “trickles down to the member states…[ensuring] that we get structural change in order to achieve normalcy for Jews across Europe.” Von Schnurbein highlighted the EU’s collective power, adding, “for example, when it comes to addressing hate speech online—also now conspiracy myths—the EU as a body of 500 million Europeans has more weight.” She detailed several EU initiatives including the 2018 declaration on the fight against antisemitism and the recently created EU center for disinformation.

On an optimistic note, Carr pointed to “leaders like Lord Mann, like Felix Klein, like Katharina von Schnurbein, who are doing such remarkable work—game changing work—that is really making such a difference.”  Carr added that there has been important progress in the field of hate crimes prosecution, remarking that “as a former prosecutor [himself], who has prosecuted hate crimes, [he] knows how important it is that prosecutors and police and judges be properly trained on how to recognize, how to investigate, how to prosecute, and how to appropriately punish hate crimes.”

Germany’s Klein tackled delegitimization of the State of Israel, declaring that “anti-Zionism is a very popular form of antisemitism. People say Israel, but they really mean Jews. The Israel-related antisemitism is a very strong form of antisemitism in Germany; around 40% of the German population has latent anti-Israel bias.” Describing an incident where he spoke out against a South African professor comparing Israel to an apartheid state, Klein reaffirmed his well-known dedication to “fight[ing] every form of antisemitism, even if it comes from the scientific world and from outside Germany.” Asked about German reporting, Klein replied that they have “a system now established [that] also monitors antisemitic attacks below the realm of crime…We already have different figures compared to our official statistics.”

Explaining his position as UK Advisor to the Government on Antisemitism, Lord Mann said that his “role is to make sure that the British government does what’s needed, and they get [his] advice whether they like it or not—usually in private. If they don’t listen, you’ll know they haven’t listened because it will get very public very, very quickly.” Mann, echoing the remarks of his colleague Lord Eric Pickles (the UK’s Special Envoy on post-Holocaust issues) from the June 2nd WJC SECCA meeting, shared that the United Kingdom has made an online harms bill a top priority, which will be well-thought out legislation.

In response to a query regarding a potential increase of immigrants to Israel, Minister of Aliyah and Integration Pnina Tamano-Shata described her five-year national program, stating that it is “important to motivate Jewish communities around the world to come to Israel.” According to Tamano-Shata, “[Israel] will never close [its] sky. This is our mission.”

Other participants in the broadcast included Daniel Atar, Chairman of KKL-JNF; Jonathan Braun, President of the World Union of Jewish Students and a WJC Vice-President; Yael Eckstein, President of the International Fellowship of Christians and Jews; Yuli Edelstein, Israeli Minister of Health; Israeli Minister of Strategic Affairs Orit Farkash-Hacohen; Yair Lapid, Leader of the Opposition in the Knesset and Chair of Yesh Atid-Telem; Ayelet Shaked, Member of Knesset and former Justice Minister; World ORT Board of Trustees Chair Robert Singer; and Dr. Eyal Zimlichman, Chief Innovation Officer at the Sheba Medical Center.