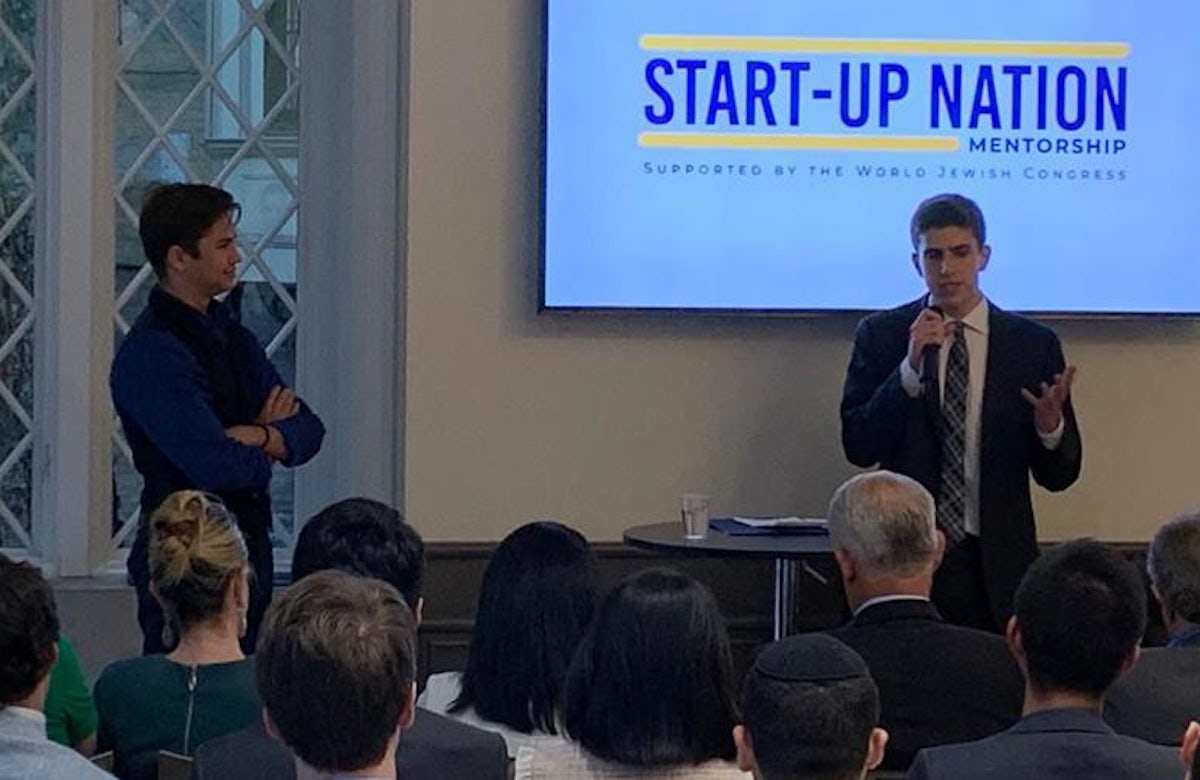 NEW YORK – The World Jewish Congress and the Israeli Consulate in New York held an event for the public launch on Tuesday of the Start Up Nation Mentorship program, a student-driven enterprise that aims to revolutionize the narrative of Israel for younger generations. The program is the product of the 2018 Campus Pitch Competition, a initiative supported by the WJC under the leadership of its president Ronald S. Lauder, together with the Israeli consulate, that encourages students to propose a creative new project to change the dialogue about Israel on college campuses.

The Start Up Nation Mentorship Program pairs non-Jewish students at elite American universities with Israeli professional mentors across all fields. Mentors and mentees are asked to have two 30-minute video conferences or phone calls over the course of an academic semester, to enable the mentor to provide career advice and Israeli know-how to the students, as well as to provide the student with his/her first exposure to an Israeli citizen outside the political/conflict context.

For more information about the program:

Sonia Gomes de Mesquita, Chief Program Officer of the WJC, said:  “There is a reason that Israel is the known as the world’s start up nation. It’s a country filled with brilliant, motivated individuals who built a vibrant and diverse country in less than a century. The Start-Up Nation Mentorship Program is the perfect opportunity for the leaders of tomorrow to interact with Israeli professionals in a one-on-one setting. Through the program, students have the chance to meet and learn from motivated Israeli businessmen and women with a track record of success in a broad range of fields, and to see the true face of Israel.”

Galit Peleg, Consul for Public Diplomacy at the Israeli consulate, said: “Over the last four years, the Israeli consulate and the World Jewish Congress have been working together on campuses to promote a positive dialogue about Israel, through student-led initiatives. The Start-Up Nation Mentorship Program, a product of these campaigns, speaks precisely on this level to the future generation of business people in the United States. Connecting local students with Israel’s business community enables students to get to know the real Israel, one that is relevant to them, opening a window for them to the culture of business in Israel and thus expanding their horizons.”

Adam Shapiro, co-founder of the Start-Up Nation Mentorship program, said: “Based on the impact that we’ve seen Start-Up Nation Mentorship have on students in one year, we are excited to continue to grow this venture internationally and build a global community of college student leaders that are proud to be engaging with Israel. This event brought together leaders of business, technology, government, and the non-profit sector to celebrate collaboration with Israel beyond typical boundaries.”

Sarel Anbar, also co-founder of the program, said: “At Start-Up Nation Mentorship, our greatest asset is our people. By investing in building lasting relationships between today’s executives and tomorrow’s leaders, we are ensuring that communities around the world are positioned to benefit from the tremendous opportunities Israel offers on the global stage.”