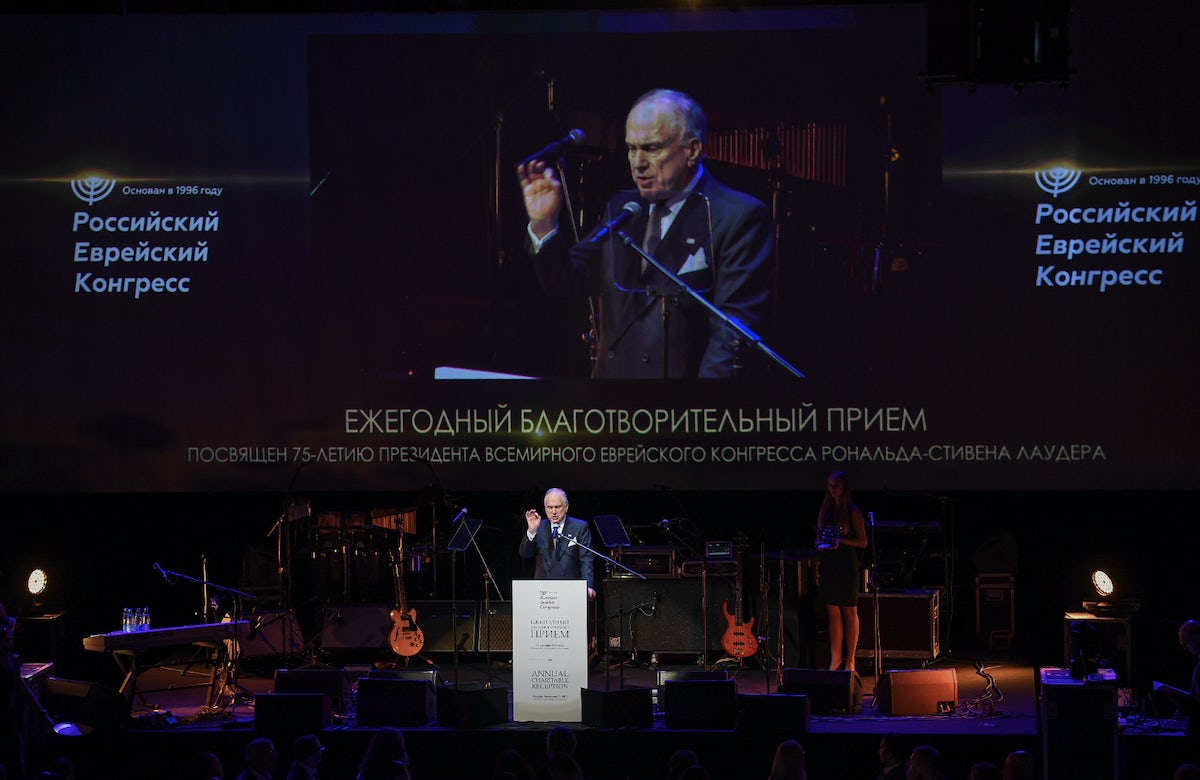 MOSCOW, Russia – World Jewish Congress (WJC) President Ronald S. Lauder was honored Monday by the Russian Jewish Congress (RJC), the local affiliate of the WJC, at its annual charitable reception. Upon receiving the honor, Lauder noted with gratitude that under the leadership of Russian President Vladimir Putin, “antisemitism has all but disappeared throughout Russia,” and urged the Russian Federation to officially adopt the International Holocaust Remembrance Alliance’s non-binding universal definition of antisemitism as a “powerful message” to the world.

“Having the Russian Federation add its signature to this declaration would send a powerful message of tolerance, and that helps everyone,” Lauder said, noting that despite the “extraordinary turnaround” in Russia to the benefit of the local Jewish community, antisemitism nevertheless continues to proliferate and rise across the globe, and in Western Europe in particular.

Thanking Russian Jewish Congress President Yuri Kanner, Lauder emphasized that the World Jewish Congress – and he personally – greatly value the “tremendous strength” of the Russian Jewish Congress.  “You are not just colleagues. You are our partners, and our friends. Together, we speak in one voice to protect Jewish people everywhere and defend the State of Israel. It is a strong voice, and it grows stronger every day.”

‘We are all Jews. We are one people. Let’s start acting like one people’

WJC President Lauder’s address was made in the presence of influential political and Jewish leaders, including Russia’s Deputy Foreign Minister Michael Bogdanov and other senior ministers EuroAsian Jewish Congress President Michael Mirilashvili, Chairman of the Conference of European Rabbis and WJC Vice President Boris Mints, WJC Vice President God Nisanov, patron of the Jerusalem Foundation and of the World Jewish Congress Professor Grigori Roitberg, and the ambassadors of Israel, Austria, Greece, and Argentina, among others.

“All of you here tonight have done something truly extraordinary,” Lauder said. “And you’ve done it in such a short time. You have helped redefine what it means to be a Jew in Russia.”

“I believe that Jews in other countries have much to learn from Russian Jews,” Lauder added, including “how to hold on to their religion in spite of the threats of antisemitism and the challenges of assimilation and inter-marriage”, as well as an “unequalled” display of unity and support for the State of Israel.

Moreover, Lauder noted, “there is another important point that all of us on the outside can learn from the Russian Jewish community that is even more vital at this moment in our people’s history.” The very presence of the leaders of three branches of Judaism in the same room at this event underscores that it is possible, and necessary, for all Jews to stand together in unity and collaboration. “We are all Jews. We are one people. Let’s start acting like one people. Jews around the world can learn this important lesson from the people in this room. And that goes for Israelis, too.”

“I have committed my life to all of you in this room and to the Jewish people everywhere,” Lauder concluded. “I want to thank you for joining me in this noble cause.”