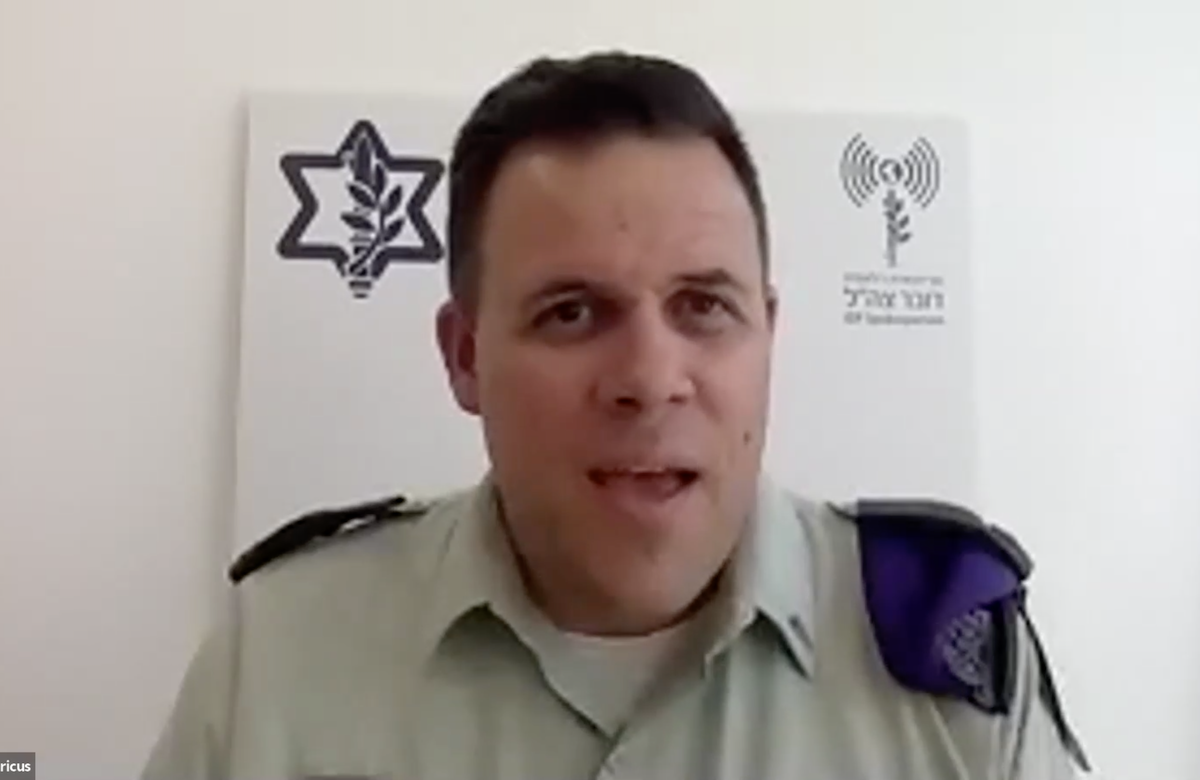 On Wednesday, June 10, the World Jewish Congress hosted Lt. Col. Jonathan Conricus, International Spokesperson of the Israel Defense Forces, to provide a Zoom briefing to Jewish lay leaders and professional staff from Jewish communities across the globe on how the IDF has handled the Coronavirus pandemic in Israel, and its responses to recent threats. The briefing was attended by 92 representatives of 33 WJC-affiliated communities, including members of the WJC Steering and Executive Committees, and was moderated by Lior Herman, a member of the WJC Executive Committee and of the WJC Jewish Diplomatic Corps.

This briefing was the latest in a series of virtual events the WJC has hosted for its affiliated communities since the outbreak of the COVID-19 pandemic.

During his presentation, Lt. Col. Conricus shared insights on Israel’s best practices and knowledge for flattening the coronavirus curve. It has been crucial for the IDF to adapt to the new circumstances created by the coronavirus outbreak and provide necessary resources for the country while continuing its normal defense operations, as Israel’s enemies have not relented in their attacks.

Aside from its regular activities, the IDF has served as one of the primary institutions dealing with the pandemic within Israel. The unit that typically builds bomb shelters and prepares civilian populations for physical attacks shifted its focus to address the COVID-19 crisis within the Israeli population.

Lt. Col. Conricus reported that there have been over 18,000 people who have had confirmed cases of COVID-19 in Israel, of whom 15,168 have recovered and 299 have, unfortunately, passed away. No active IDF soldiers have died or been in critical condition as a result of the coronavirus, though hundreds have tested positive and thousands have had to go into quarantine since the beginning of the pandemic in March. The IDF, together with Israel as a whole, observed the quarantine regulations strictly, requiring any person who may have come into contact with the disease to self-isolate.

As the world quickly began to grapple with the pandemic, the biggest challenges for the IDF and the Israeli government were to set regulations in place and to educate the population. Information in Israel was provided in six languages, and an IDF-controlled call center was established. A food distribution system was set-up for those in lockdown and unable to obtain groceries and other essentials, with the IDF delivering three million food packages. This system was especially important as Jews were observing Passover and Muslims were observing Ramadan. IDF service members also donated over 13,000 pints of blood to help those affected by the virus. The IDF was able to develop, manufacture, and distribute ventilators, many of which have thankfully not been needed, to treat COVID-19. Ambulances were retrofitted to compress oxygen and carry virus-infected patients safely.

Despite this work and the help being offered, smear campaigns have emerged insisting that Israel provided no assistance to Palestinians in the West Bank or Gaza strip. Lt. Col. Conricus emphasized that in reality, there has been significant cooperation on the ground with the Palestinians. Over 26,000 trucks filled with goods entered Gaza to provide assistance; testing kits were provided, training was given to Palestinian doctors, and tests done in the West Bank were examined in Israeli labs. Today, there are only a handful of active cases of Coronavirus in Palestinian territories and only one verified COVID death in Gaza.

In the midst of the pandemic, Lt. Col. Conricus said that the IDF continues to actively defend Israel from its enemies. Iran, despite being hit hard by the virus, has not stopped targeting the State of Israel, exporting violence, and entrenching itself along Israeli borders using Hezbollah as a proxy. That terrorist organization continues to grow its rocket stockpile and now has over 130,000 aimed at Israel, most of which are being hidden among Lebanese citizens. The IDF also continues to monitor Iran’s entrenchment in Syria, which is seen as an existential threat. Weapons have continued to be moved from Iran to Hezbollah, included precision-guided missiles, which are of great concern to Israel.