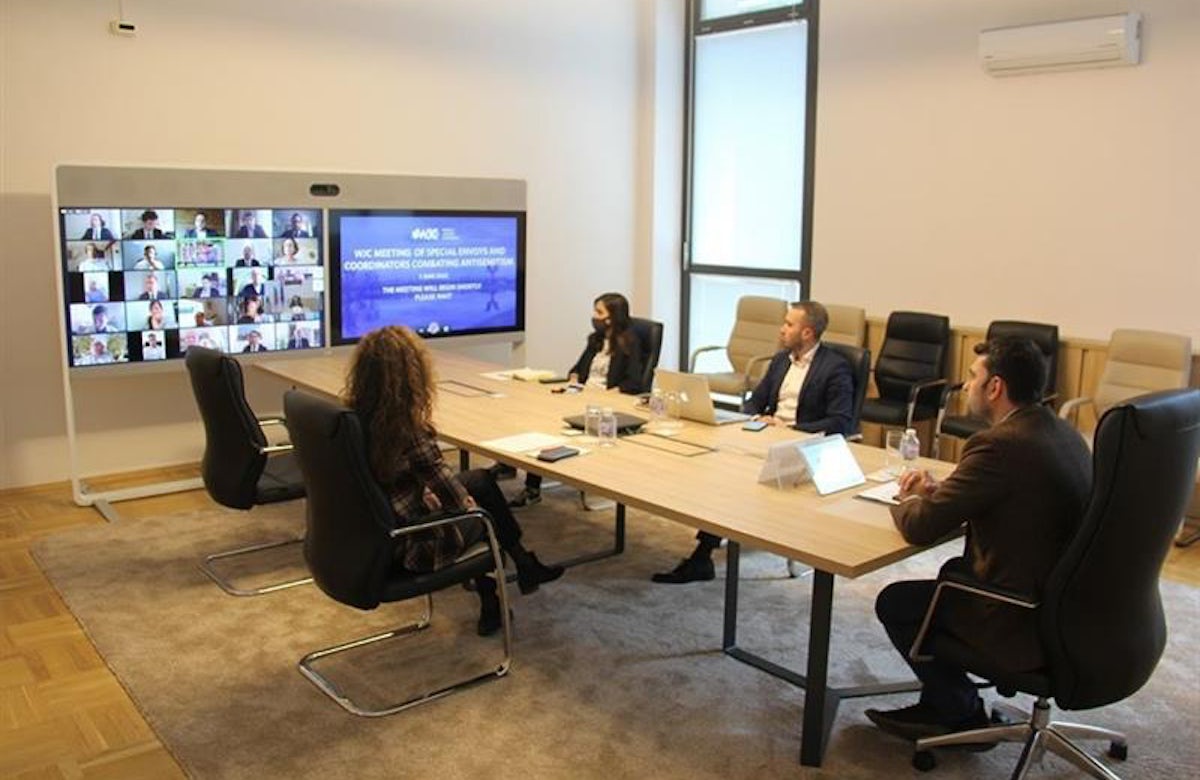 It’s become almost routine by now: an email from "Organization X" alerting you to the latest Zoom conversation with "Expert Y,” Tuesday, 11:00 AM. You check your e-calendar and see no fewer than three such events already scheduled for that time.

More than a quarter of a year since Covid-19 lockdowns began across the globe, countless groups have worked feverishly to organize virtual events for their constituencies. Most follow a similar script with a well-dressed moderator perfectly positioned against a backdrop of his or her favorite bookcase and one or two panelists reciting their prepared texts to an audience listening patiently on mute.

On Tuesday, June 2, the WJC continued on this path and reconvened its forum for Special Envoys & Coordinators Combating Antisemitism (SECCA), bringing together dozens of officials from national governments and international organizations with WJC-affiliated Jewish community leaders. The group met to continue its exchange of best practices in the battle against antisemitism. This third international meeting of SECCA follows prior meetings in Bucharest and Munich in 2019. In Munich, WJC president Ronald S. Lauder referred to the SECCA forum participants as “perhaps the most important people helping the Jewish people fight antisemitism.”

Opening the session, Stern encouraged the assembled officials to pursue three immediate initiatives within their governments to immediately improve conditions for Jewish communities: adopt and implement IHRA definitions of antisemitism and Holocaust denial and distortion; enact legislation that requires online platforms to remove hate speech; and appoint national coordinators to monitor antisemitism and advance national strategies to combat it.

Von Schnurbein noted that the forum is “invaluable, especially as old forms of antisemitism develop in front of our eyes in a new package linked to COVID-19,” and that “it is important [for participating officials] to inspire each other on different actions that can be done and hear from [Jewish] communities what are their greatest concerns.”

Von Schnurbein went on to explain that while hate speech and incitement to violence is criminalized on the European level, “conspiracy myths are not necessarily hate speech. They are coded and difficult to address.” Describing the newly launched European Commission Observatory, she remarked that such content will be monitored there and “informal platforms of fact checkers will look into the myths and debunk them or if possible, ‘pre-bunk’ them.” Von Schnurbein emphasized the responsibility of social media platforms to support fact checkers, saying that “the road from conspiracies to lethal force is very short.”

Elan Carr, the US Special Envoy to Monitor and Combat Anti-Semitism, joined the video conference from the White House lawn on his way to an international religious freedom event. Carr highlighted the importance of going on the offensive against antisemitism, declaring that we have “to drive a philosemitic narrative that stresses affection for Jewish values, respect for Jewish history, and an embrace of what the Jewish people have brought to the world, and frankly, to each and every one of our countries.”

Carr was joined by Assistant Special Envoy Efraim Cohen, the first principal in the history of the US State Department office assigned to focus exclusively on internet hate, who discussed the First Amendment protections that preclude robust internet regulation in the United States.  Cohen said that their office is organizing a task force of relevant experts to identify constitutional avenues to increase platform responsibilities.

Conversely, Frédéric Potier, France’s interministerial  delegate in the fight against racism, antisemitism, and anti-LGBT hatred, reviewed the recently passed French legislation that requires online platforms to remove hate speech and other dangerous content within 24 hours of reporting and imposes fines for failure to do so. The law, which currently sits before France’s supreme court, is expected to go into effect in several weeks.

Lord Eric Pickles, United Kingdom Special Envoy for Post-Holocaust issues, similarly advocated regulatory intervention, telling the forum that “the pandemic has shown that we need to up our game on working with social media companies to ensure better detection and removal of misinformation.” The UK’s government has proposed the Online Harms bill, which proposes a new system of accountability and oversight that moves beyond self-regulation — “social media companies should be treated as publishers.”

Felix Klein, Commissioner for Jewish Life in Germany and the Fight Against Antisemitism, echoed Lord Pickles’ comments, agreeing that “you have to make internet platforms responsible; they should be treated as publishers.” This is the approach of Germany’s Network Enforcement Act, requiring companies to remove illegal hate speech within 24 hours of being put on notice. Klein said that he is optimistic about the law’s use in combating antisemitism. He also shared plans for the German presidency of the EU, which he believes to be an opportunity to broaden his country’s fight against antisemitism on the European level.

Ahmed Shaheed, United Nations Special Rapporteur on freedom of religion or belief, stressed the importance of states adopting the IHRA working definition of antisemitism, calling it an “educational tool” and articulating that “cognitive liberation from ignorance is the first step” in combating antisemitism worldwide. Shaheed detailed further steps, including “measurable action operations,” providing a clear framework for governments to follow.

Gillian Merron, Chief Executive of the Board of Deputies of British Jews, noted that as communal activity moved online, these virtual events became newly vulnerable. While the Board of Deputies has successfully fought back against “Zoombombing,” that is, disruptive digital attacks executed by neo-Nazis, she said that the Board of Deputies struggled to compel Facebook to promptly respond to online threats of violence. She pointed out that even though the Board had joined with Facebook to create “a resource to tackle antisemitism, a result is no good unless the action is taken.”

Robert Ejnes, Executive Director of the Representative Council of French Jewish Institutions (CRIF), detailed the antisemitic assaults against France’s former Jewish health minister Agnes Buzyn, adding that these are old prejudices that have plagued society since ancient times. Similarly, the CRIF has ongoing relations with the major social media platforms and works with the sites and lawmakers to improve conditions online, but still sees very little action being taken. He encouraged forum participants to “speak one language, all of us—political actors and platforms—so that we will in fact relieve some of the hate.”

Raya Kalenova, Executive Vice President and CEO of the European Jewish Congress, reviewed data reflecting the dramatically increased levels of antisemitic content online, adding that the pandemic has only exacerbated the trend. Describing the latest antisemitic conspiracy theories, she said that “economic anxiety and fear surrounding the virus leads people to search for simple solutions, creating a new and expanding market.”

Leon Saltiel, WJC Representative at UN Geneva and Antisemitism Coordinator, speaking on behalf of WJC Antisemitism Commissioner Julius Meinl V, highlighted WJC efforts such as the monitoring and mapping of hubs of antisemitic activity as well as the tracking and refutation of Covid-19-related conspiracy theories.

As the meeting drew to a close, it was clear that the issue of adequate fact-checking was a priority for the SECCA forum participants, who resolved to continue their cooperation. The next SECCA forum will take place in September to review the collaborative actions that are planned in the aftermath of the  June 2 session, and to consider future initiatives.