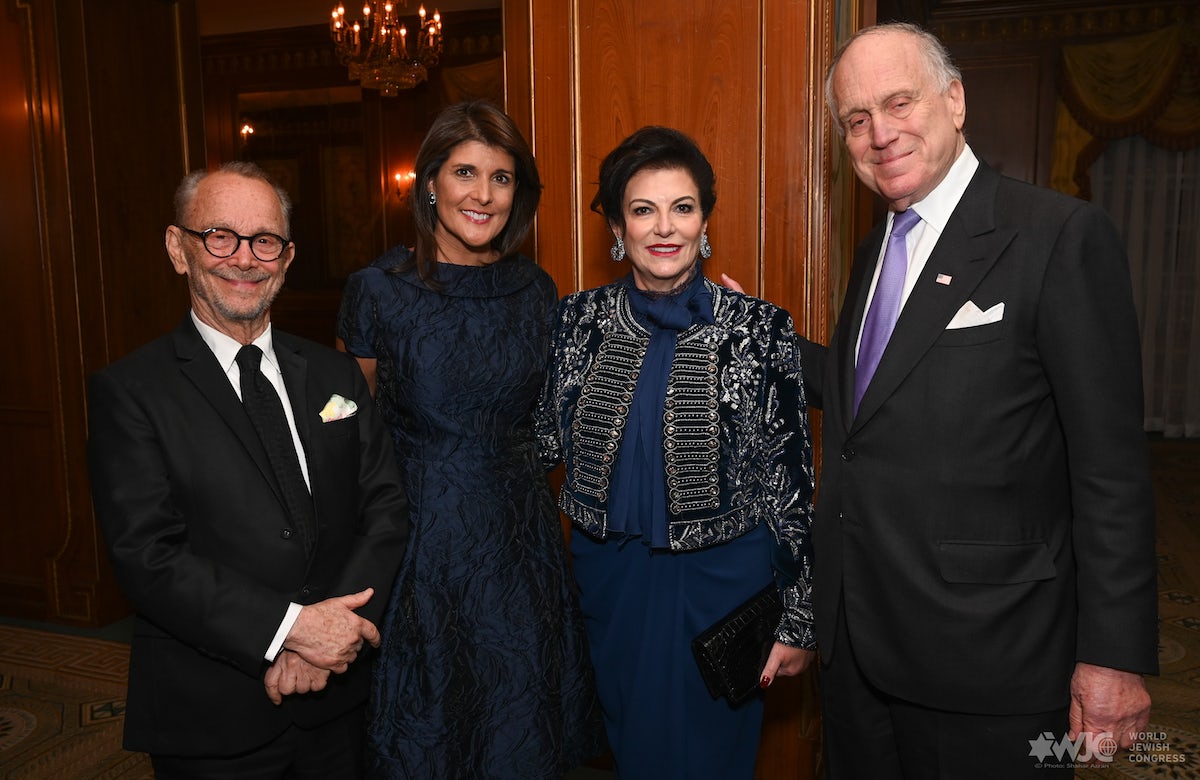 Ambassador Haley: “Israel is not going away - when the world recognizes that, peace becomes possible”

Calling Haley ‘perhaps the most courageous woman in America today’, WJC President Ronald S. Lauder says: “The Herzl Award comes with our gratitude, but it also comes with a price”.

NEW YORK – “The UN’s bias against Israel has long undermined peace, by encouraging an illusion that Israel will go away. Israel is not going away. When the world recognizes that, then peace becomes possible,” former United States Ambassador to the United Nations Nikki Haley said on Wednesday, upon accepting the World Jewish Congress’ prestigious Theodor Herzl Award from WJC President Ronald S. Lauder, an accolade that recognizes outstanding individuals who work to promote Herzl’s ideals for a safer, more tolerant world for the Jewish people.

As a freshman in the United Nations, Haley said, it became clear to her that certain “outdated customs” of the organization, such as bullying Israel, had become common practice – complete with a “monthly Israel-bashing session” in the Security Council. One of the first lessons she learned, Haley said, is that “the most important thing is to not be afraid to rely on your core values, even when they go against outdated customs… [which] have gone unquestioned for years.   One of those core values is standing up for your friends.”

“Some people accused us of favoritism toward Israel,” Haley related, adding: “But what we did was really not about favoritism. In all that we did at the UN, our approach to Israel was tied together by one major idea. The idea is the simple concept that Israel must be treated like any other normal country,” she said. “And that demand is actually a demand for peace.”

WJC President Ronald S. Lauder to Haley: 'You will not be able to rest because we expect even greater things from you'

In presenting the award to Ambassador Haley, WJC President Lauder underscored Ambassador Haley’s relentless support for the State of Israel, as a leading voice in the fight against the prevailing double standards and biases within the international community. Calling Ambassador Haley “perhaps the most courageous woman in America today” and a “breath of fresh air” who subjected the UN to a “a strong and clear voice of truth, President Lauder said: “The Herzl Award comes with our gratitude, and with our deep appreciation. But it also comes at a price. You will not be able to rest because we expect even greater things from you … Like Herzl, you have championed a cause that has, and continues to have, more than its share of enemies. But it places you on the right side of history. And if there is anyone in this room that has the fire, the courage, and the faith to take on this test, it is you, Nikki Haley.”

President Lauder also reiterated in his remarks the evolving focuses of the WJC, and the critical nature of providing accessible Jewish education, combating efforts to undermine the State of Israel, and protecting our communities against the rising proliferation of antisemitism from both the far-left and the far-right, as well hate speech as in the digital sphere. “Today, we are not powerless, and, today, we have a voice - a loud, clear voice - which we intend to use. But you will hear fewer words and see more action. We will fight antisemitism. We will fight neo-Nazis, as well as the antisemitism on the Left. We will keep fighting. Because we are fighting for one thing – the survival of the Jewish people. And I promise you this: we will win.”

At the same event, Joel Grey, the legendary actor, singer, director, and photographer was presented with the WJC's fourth Teddy Kollek Award for the Advancement of Jewish Culture by WJC President Lauder, who called him "not just a Jewish treasure, but a national treasure". In his address, Grey spoke of the impact his Jewish heritage has had on his work, including on his decision to embark on his latest production, Fiddler on the Roof in the Yiddish language.

Kirk Douglas was honored with the inaugural Teddy Kollek Award in 2016, followed by film director George Stevens in 2017, and philanthropist Robert Kraft in 2018.

Tonight in New York we are honored to present @NikkiHaley with our prestigious Theodor Herzl Award for her unwavering support and commitment to the Jewish people and the State of Israel. pic.twitter.com/Y35KklFAfn