Tribute to memory of Jews of Veria, Greece unveiled as part of Holocaust remembrance events 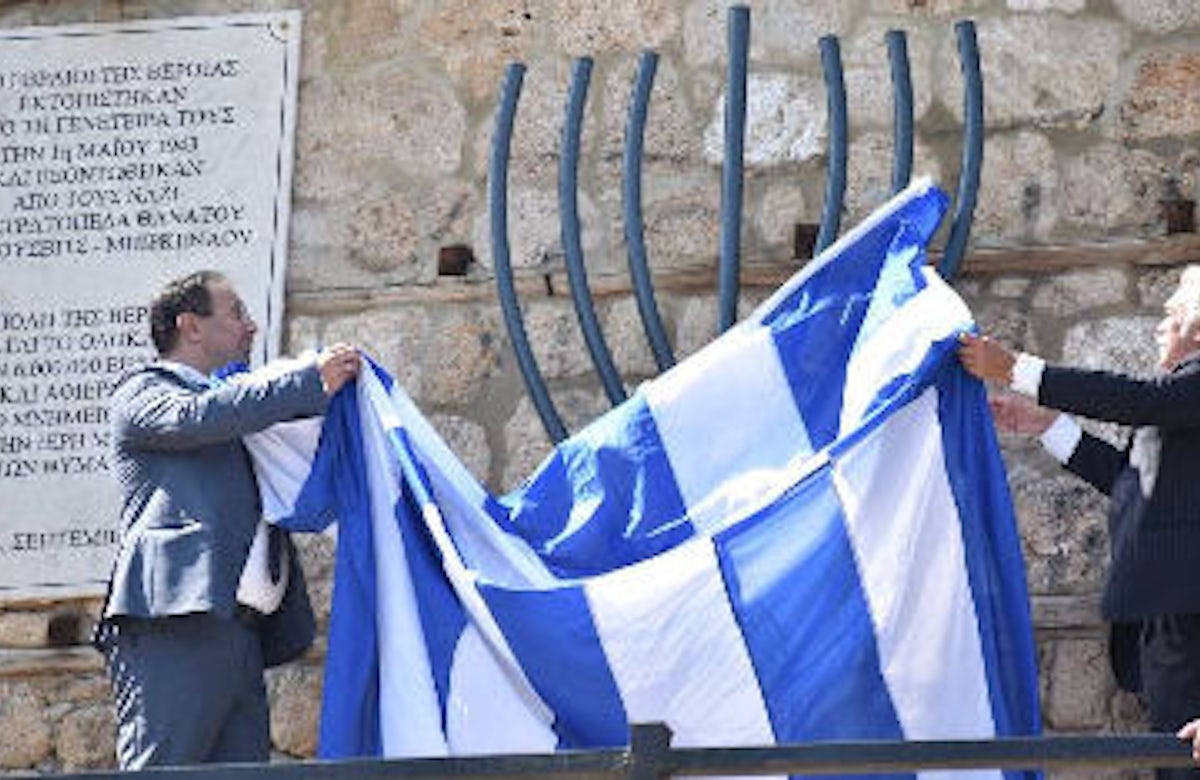 (c) Central Board of Jewish Communities in Greece

The Thread of the Memory of the Jewish presence in Veria, before the evil period of the war and the Holocaust, was unrolled during the afternoon of Sunday 22.9.2019 by all those who honored the invitation to attend the March in Memory of the 460 members of the Jewish Community of the city, deported to the Nazi Concentration Camps.

The City Authorities, the Metropolitan Bishop of Imathia Panteleimon, hundreds of citizens of Veria, students from local schools, choirs,  a lot of Israelis originating from Veria, Jews all over Greece and representatives of Embassies were among the 2,000 people that attended the event.

The three day Holocaust commemoration events, organized on the occasion of Chairmanship of the Grand Duchy of Luxembourg at the International Holocaust Remembrance Alliance (IHRA), culminated with the march which was followed by a concert entitled "The Memory of the Thread", based on an idea of the famous soprano Sonia Theodoridou. The events were organized by the Embassy of Luxembourg in Greece, the Municipality of Veria, the Hellenic Delegation to the IHRA, the Central Board of the Jewish Communities in Greece, the Jewish Museum of Greece and the Non-profit civil society "Beautiful Greece", with the support of the Embassy of Israel in Greece, the Jewish Community of Thessaloniki, the Holly Metropolis of Veria, Naoussa and Kampania, the Greek-Israeli Chamber of Commerce and the support of Mr. Sabby Mionis.

"My idea was that a red thread traverses, in the footprints of all the people that have been deported from their homes. The thread symbolizes the path of the blood", Sonia Theodoridou stated to the Athenian-Macedonian press agency, few hours before the march, while she was putting a last "touch" to the artwork made with shoes offered by local people, in memory of their Jewish fellow citizens. The artwork was "bind" by a grid from red threads placed in front of the Synagogue in the old Jewish neighborhood of Barbouta.

Students from Veria, wearing black clothes, holding cartons with the names of their Jewish fellow citizens perished in the Holocaust, were led in the march by survivors Rachel Daniel and Reuven Emmanuel. Some steps behind the famous soprano were unrolling with them the memorial thread. They were all walking a three-kilometer course, starting at the Synagogue and ending at the Railway station, the point from which the Jews of the city were deported to Auschwitz - Birkenau.

Before starting the march, at the Synagogue, the Rabbi of Thessaloniki, Aaron Israel, prayed at the commemoration ceremony, while the Mayor of Veria Konstantinos Voryiazidis, the President of the Central Board of Jewish Communities in Greece,  David Saltiel and Sonia Theodoridou addressed the audience mentioning the content and the spirit of the "thread of Memory and responsibility".

The thread passed from the picturesque uphill alleys to the central avenues of Veria. The students, holding the plates with the names of the victims of the Holocaust were apposed alongside the way and as the thread was passing by them they started walking. The march was more and more crowded by hundreds of citizens who followed the thread with tears in their eyes. The thread arrived to the railway station behind Mayor K. Voryiazidis and Secretary General of the Central Board of Jewish Communities in Greece Victor Eliezer.

At the entrance of the railway station Luxembourg's cellist and composer Andre Morgenthaller received the crowd playing a melody from the theme "Schindler's list". Soprano Sonia Theodoridou placed with reverence the red thread in front of the stage, starting the concert  with the hymn "Eli - Eli". An hour of amazing songs and music themes related to the Holocaust were interpreted by Sonia Theodoridou. The soprano was accompanied by the ‘Mobile Orchestra’ conducted by Maestro Theodoros Orfanidis. An hour of  thrilling performance by Sonia Theodoridou and by Veria's choruses followed. The event ended with a discourse by the Reverend Metropolitan of Veria, Naoussa and Kampania Mr. Panteleimon.

This initiative "gave a voice to our 460 fellow citizens, expressing simultaneously our own feelings towards them. It also expressed our commitment not to allow such an Holocaust to happen again" the Metropolitan strengthened.

UNVEILING THE HOLOCAUST MEMORIAL AT THE OLD JEWISH CEMETERY.

Few hours before the march, at the old Jewish cemetery, in the neighborhood of Promitheas, the unveiling of the Holocaust Monument was realized. This monument shows a Menorah placed in front of a small house built to remind the Jewish cemetery, as this was ceded to the Municipality in order to house an area of sports. The Holocaust Monument, a donation of the Jewish community of Thessaloniki was created by engineer David Frances and looms on the surrounding elevated area, over which some still remaining tombstones are laying. These gave the place-name "Jewish tombs" to the area. Next to it, on three marble tiles the following message is engraved in Greek, English and Hebrew:  “460 JEWS OF VERIA WERE DEPORTED FROM THEIR BIRTHPLACE ON 1ST MAY 1943 AND EXTERMINATED BY THE NAZIS IN THE DEATH CAMPS OF AUSCHWITZ – BIRKENAU. THE CITY OF VERIA REMEMBERS THE HOLOCAUST OF THE 6.000.000 JEWS AND DEDICATES THIS MONUMENT TO THE HOLY MEMORY OF THE VICTIMS”

During his speech, at the unveiling ceremony, the Mayor of Veria Konstantinos Voryiazidis spoke about an "historical day" mentioning that the conservation of the Memory is an "historic and moral duty", underlining that if the local Jewish Community hadn't perished, Veria would be a much "richer" city today.

"It is important to remember and to learn this precise chapter of history on the Jewish life here" the new Israeli Ambassador to Greece, Yossi Amrani stated during his speech at the ceremony.

"The Memorial consists an homage and an expectation for the future", the President of the Central Board of Jewish Communities Greece, David Saltiel, said after having unveiled, together with the Mayor of the city the Monument, mentioning the necessity that the monument must be transformed in a "living tool of interaction with history".

Addressing the public during the unveiling ceremony, the Head of the Hellenic delegation at IHRA, Dr. Efstathios Lianos - Liantis, mentioned that remembering is a necessity and underlined the forthcoming assumption of IHRA's Chairmanship by Greece in 2021.

The commencement of the events - The ties with the roots.

The three day events started on Friday September 20, 2019. Some days before, Sonia Theodoridou, the Mayor, the Vice-Mayors, the city services, the schools, women volunteers from Veria and Nana Karayiannidou, in charge of the cultural affairs of the Municipality, were motivated  and mobilized in order to welcome in the best possible way all the visitors coming to their city. Indeed, artistic interventions highlighted every place of the city. Blue and white ribbons and multicolor hearts with the greeting "Shalom" written on them adorned trees, flower beds, lamp posts and shop windows. A banner announcing the celebrations hulked at the entrance of the city hall.  In Barbouta the Synagogue opened its doors. The  shoes artwork underlined the missing Jews of Veria giving shivers of emotion to the visitors and the passersby. Rachel Daniel, an 80 year old resident of Veria, came from Israel with her two daughters and visited her nest-house at Dimitros street, emotionally moved.

The first event, was the visit to the town hall. The Mayor with Sonia Theodoridou and the President of the Central Board of Jewish Communities in Greece welcomed about 60 Israelis, representatives of Jewish communities and a group of visitors from the Jewish community of Athens. Haim Taboch, an Israeli from Veria, entered the city hall on a wheelchair and greeted the Mayor awestruckly! "This used to be my school" he exclaimed and then started talking about the old citizens of Veria. The city hall, an historical house, built in 1906, was housing initially the Hellenic Gymnasium and till the beginning of the nineties several school premises. Haim Taboch is puzzled over being congratulated for his high level of Greek. "...of course I have studied in this Gymnasium!" he said.

Answering the question of the Mayor who asked him if he has returned to Veria ever since, he said: "Many times... Every five years we were celebrating reunions here with my old school mates! ...but we have lost many of them recently and this custom is gradually lost..."  he added with tears. The Mayor and the President of the Central Board of Jewish Communities in Greece welcomed the visitors in the hall of the city board. Sonia Theodoridou presented the program of the three day events before the exchange of souvenir gifts.

Afterwards, the Authorities and the visitors walked till the Synagogue, where a Kabalat Shabbat was celebrated by Mr. Jack Algava. The evening ended after offering a traditional Sephardic buffet, in front of the Synagogue.

On Saturday September 21, 2019, the ceremony of this year's IHRA events , under the chairmanship of Luxembourg, was organized at the Arts Hall of the Municipality. Earlier on that morning the visitors were offered a tour to Vergina and visited the Royal tombs at the archeological site of Aeges.

The main event started with the opening of the exhibition of the Jewish Museum of Greece titled "Hidden children in Occupied Greece" at the foyer of the Arts Hall. The director of the Museum, Zanet Battinou, spoke about the work the Museum is realizing, its role as a member of the Hellenic Delegation to the IHRA and its contribution in promoting educational programs on the Holocaust. The President of the Jewish Museum of Greece Samuel - Makis Matsas and Reina Siakki-Molho were also present at the event and spoke about their personal experiences during Nazi occupation.

Greetings by the co-organizers of the events followed at the theatre of the Arts Hall. Veria's Mayor Konstantinos Voryiazidis, Ambassador of Luxembourg Paul Steinmetz, the Head of the Hellenic Delegation at the IHRA Dr. Efstathios Lianos - Liantis, the President of the Jewish Museum of Greece Samuel - Makis Matsas and the President of the Central Board of Jewish Communities in Greece David Shaltiel  mentioned during their speeches the meaning of the celebrations and the importance of these initiatives in order to keep the Memory of the Holocaust alive.

The event continued with the presentation of the 37th volume of the Chronicles of Imathia, an edition of the Society for Historical and Cultural Studies of the region of Imathia, which is dedicated to the history of the Jews of Veria. The volume was preceded by the President of the Central Board of the Jewish Communities of Greece. Dr. Emanuel Xinadas, Secretary General of the Society, spoke about the content of this edition, then Pepo Stroumsa, the single Jew of Veria, referred to his memories from Veria of older ages.

The event was brought to an end with Sephardic, Hebrew and Greek songs sung by the choir Echo Verois.