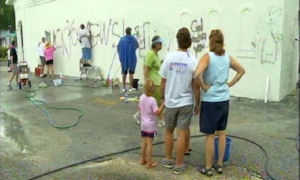 A building in Mount Dora, Florida, which was recently refurbished to house a new synagogue, has been spray-painted with anti-Semitic graffiti. The new Traditional Congregation of Mount Dora, in the Orlando area, was discovered vandalized with the graffiti and hate messages on Saturday morning. Police were treating the incident as a hate crime.

Street signs, roads and vehicles in the area reportedly also were spray-painted with similar messages. Volunteers arrived within hours to clean off the synagogue graffiti, according to reports. The synagogue is scheduled to open in two weeks. The 100-member-strong local community received immediate assistance from other faiths in the cleaning of the walls.

"We hope soon to find who did this and bring them to justice, and in the meantime this community has pulled together in an amazing way," said Mount Dora Mayor Melissa DiMarco.