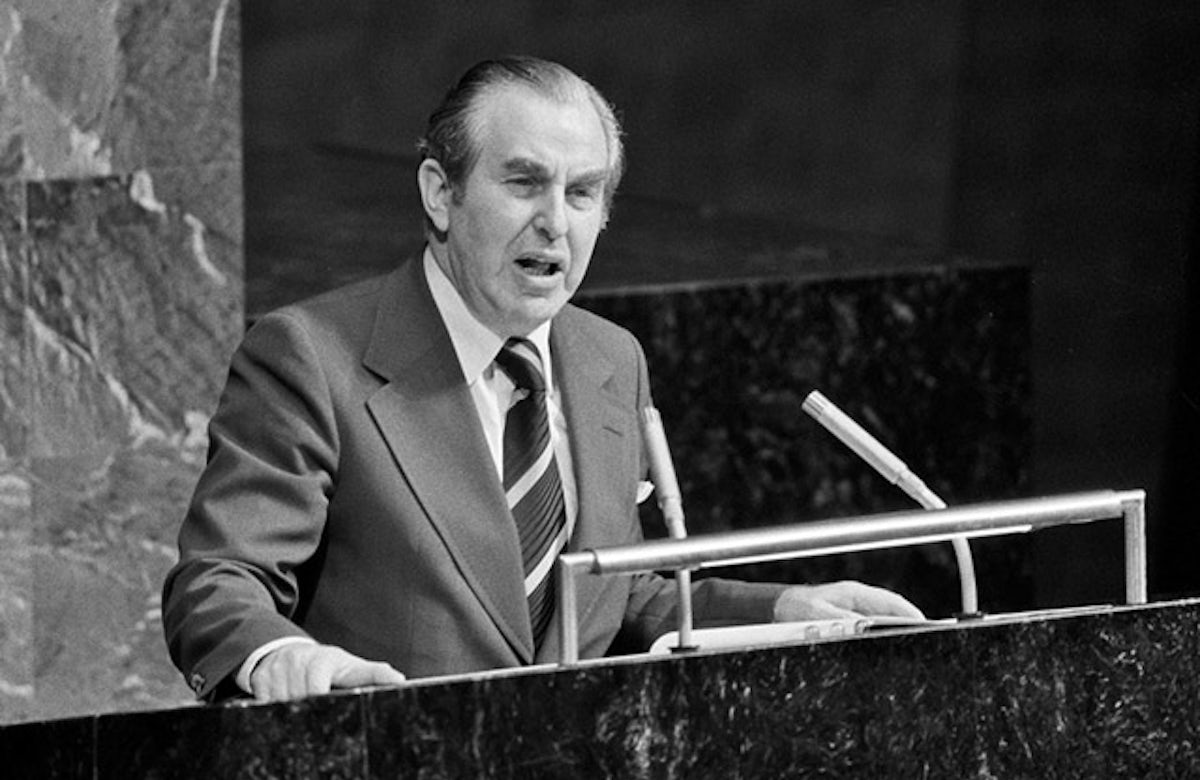 On 16 December 1991, the United Nations General Assembly (UNGA) rescinded Resolution 3379, which stated that "Zionism is a form of racism and racial discrimination", with its adoption of Resolution 46/86.

The UNGA adopted the Resolution 3379 on 10 November 1975 by a vote of 72 to 35, with 32 abstentions. The resolution was strongly supported by the Soviet Union to strengthen its relationship with Israel’s Arab neighbors. Among the dozens of countries opposing the resolution were the United States and the United Kingdom.

Following its adoption, Israeli Ambassador Chaim Herzog delivered an impassioned speech noting that the resolution’s adoption coincided with the 37th anniversary of Kristallnacht. Herzog declared, “For us, the Jewish people, this resolution, based on hatred, falsehood and arrogance, is devoid of any moral or legal value. For us, the Jewish people, this is no more than a piece of paper, and we shall treat it as such.”

Then-WJC President Nahum Goldmann called the resolution “one of the worst and most immoral decisions that the UN has unfortunately indulged in the last few years.”

“To define Zionism as ‘racist’ is an absurd distortion of the basic facts and a denial of the right of the Jewish people to have its own homeland and its own state,” he said.

The WJC launched a campaign to overturn the resolution and highlight its injustices. In 1982, a WJC-commissioned report found that the word “Zionist” had become a catchall for various types of nefarious behavior. For instance, the study noted that during the Iran-Iraq war, Saddam Hussein accused Iran of being party to an international Zionist conspiracy, while Iran accused Saddam of “being entirely in the hands of international Zionism.”

The WJC also held several high-ranking diplomatic meetings with international leaders to discuss the injustice of the resolution, and in October 1982, several senior WJC officials met with the president of the UNGA, Ambassador Imre Hollai of Hungary, to discuss, among other subjects, its ongoing negative effects.

Among other significant diplomatic achievements was Brazilian President-elect Fernando Collor de Mello’s acknowledgment that Brazil’s 1975 vote in support of the resolution had been “a mistake,” and that his country would not vote that way again. Similar commitments were made by the presidents of Uruguay and Mexico.

Finally, on 16 December 1991, the UNGA overwhelmingly passed Resolution 46/86 by a vote of 111-25, declaring that “the General Assembly decides to revoke the determination in its resolution 3379 of 10 November 1975.” Thirteen nations abstained and seventeen, including Egypt, Kuwait, and China did not vote.

Eight-five countries - about half of the members of the United Nations - co-sponsored the resolution. Among those supporting it was the Soviet Union, in one of its final votes before its dissolution.