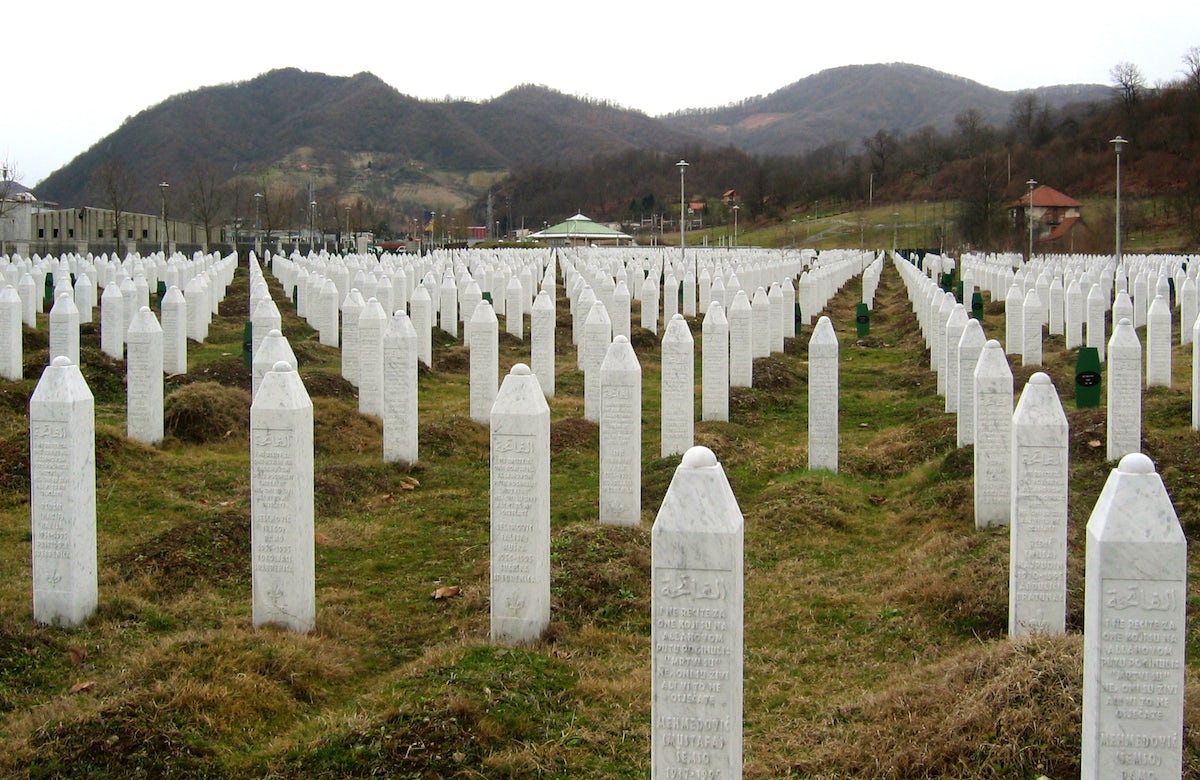 This article was published in the UK's Jewish News on July 6, 2020

The genocide that took place in Srebrenica starting on 11 July, 25 years ago this week, was the largest act of mass murder in Europe since World War Two.

In 2017, the International Criminal Tribunal for the former Yugoslavia found Bosnian Serb Military Commander Ratko Mladić guilty of the worst crimes that can be committed: war crimes, crimes against humanity and genocide.

This, like the 2016 conviction of Radovan Karadžić, President of Republika Srpska in 1995, marked a long-awaited moment of justice for victims and their loved ones. Fikret Alić, the Bosnian who was photographed as an emaciated prisoner behind the wire of a prison camp in 1992, told journalists: “Justice has won and the war criminal has been convicted”.

But for many, the outcome of this slow and painstaking process – which concluded 22 years after the massacre took place – was too little, too late.

Where was the international community who stood by in 1995 and, over the course of ten days, allowed the genocide of more than 8,000 Muslim men and boys in Srebrenica?

This awful truth was acknowledged by the late Kofi Annan, the former Secretary-General of the United Nations, who later said that: “the cardinal lesson of Srebrenica is that a deliberate and systematic attempt to terrorise, expel or murder an entire people must be met decisively with all necessary means”.

No serious person could doubt that these thousands of Muslims were targeted because of their ethnicity and faith.

But as Jews know better than most, it never starts with mass murder. Genocide is a process that develops in stages, according to experts, from classification – distinguishing people into “us and them” – to extermination.

This horrific process can be observed historically in accounts of genocides such as the murder of Jews, Roma and gay people in the Holocaust, of Tutsis in Rwanda and Bosnian Muslims in Srebrenica.

As Jews, because of our history, many of us feel we have a particular responsibility to be alert for the warning signs, which could denote the stages of genocide unfolding.

The world failed to do this in Bosnia, and thousands of Muslims paid the price. We cannot turn a blind eye again.

This is one of the reasons why, in my day-job at the Board of Deputies of British Jews, we have been using our voice to raise awareness of the persecution of Uyghurs in China, who are today facing extensive violations of their rights.

Again, all of this goes on in plain view of the international community. And we have called on the UK government to use its position at the United Nations to raise these grave matters loudly.

But closer to home, we must all guard against the slow-creep towards genocide, which starts with discriminatory language against others. No community is immune from this, and just as the Jewish community faces antisemitism, we must also guard against our own prejudice of others, including Muslims.

On this solemn occasion, marking 25 years since the genocide in Srebrenica, my fellow members of the Jewish Diplomatic Corps of the World Jewish Congress are, like me, seizing the moment, in different countries, languages and publications, to play our part in ensuring that the international community and the worldwide Jewish community remember the horrific consequences that can result from inaction, and reaffirming our resolve to make ‘never again’ a reality.

Phil Rosenberg is Director of Public Affairs at the Board of Deputies of British Jews. He writes this piece particularly in his capacity as a member of the flagship program of the World Jewish Congress, the WJC Jewish Diplomatic Corps, a worldwide network of Jewish young professionals acting in the fields of diplomacy and public policy.