'The denial of the Srebrenica genocide should be punished' 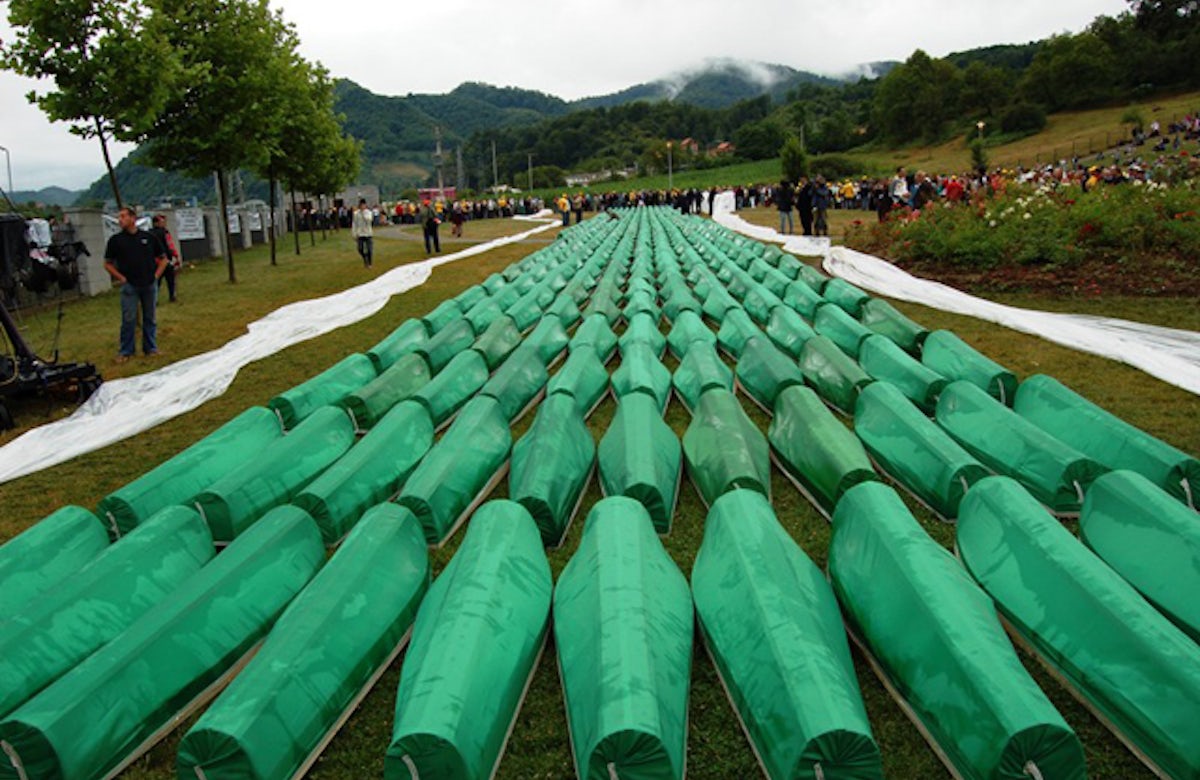 Below is a full translation of an interview originally published in Al Jazeera Balkans on 21 October 2020.

It sounds frightening that someone, at the place where thousands of Bosniak boys and men were killed, shamelessly celebrates a crime against humanity, and is calling for new murders where genocide was committed, World Jewish Congress (WJC) General Counsel Menachem Rosensaft told Al Jazeera.

As a man who fights against Holocaust denial, our interlocutor points out that the denial of the Srebrenica genocide is contrary to all verdicts, attitudes and messages of the international community, and that he hopes that people in BiH will turn away from this kind of extreme nationalist policy and lead to progress and reconciliation.

To start, can you comment on last week's events in Srebrenica, where war cries and calls for hatred, murders were heard...?

It is really frightening that, 25 years after the paramilitary thugs of the Republika Srpska under the command of Ratko Mladic committed genocide against Bosnian Muslims in Srebrenica, parts of the local Serb population in the city shamelessly celebrate a crime against humanity. Instead of working for reconciliation, people in front of the Serbian Orthodox Church on Wednesday shouted racist slogans against Muslims and called for new killings.

It is tragic that this seems to be an outgrowth of the deliberate and extremely immoral denial of the Srebrenica genocide by too many leading people of Republika Srpska. It is shocking and tragic that some of the people who want the world to recognize the genocide committed against Serbs, Jews and Roma in Jasenovac are personally falsifying and distorting the story of the crimes committed against Bosniaks in Srebrenica. What is even worse is how there are individuals outside BiH who are complicit in denying and distorting the facts about the Srebrenica genocide.

It is clear that although most BiH residents - Serbs, Bosniaks, Croats and others - want to have a normal life in peaceful coexistence with others, there are ultranationalist elements for which, a quarter of a century since the Dayton Accords, inciting ethnic hatred remains the main goal. Unfortunately, this phenomenon is in line with the return of intolerant stubbornness, antisemitism and xenophobia in the extreme right part of many parts of Eastern and Central Europe. I sincerely hope that the people of BiH will reject these apostles of hatred and choose leaders who can unite the people instead.

A quarter of a century has passed since the genocide in Srebrenica, with all the verdicts and attitudes, there are still people who deny it. How can society thrive without facing the past, and how can it cope with genocide denial?

Dunja Mijatović, Commissioner for Human Rights in the Council of Europe, rightly pointed out that many in Europe and around the world do not know about the genocide in Srebrenica, "while some do not want to know. Some even deny it. "

The fact is that too many Bosnian Serb leaders have spent the past quarter of a century in desperate attempts to convince the world that what happened in Srebrenica was not genocide. Recently, the Srebrenica Potocari Memorial Center published a report denying the Srebrenica genocide documenting revisionist initiatives by politicians and pseudo-academics to twist history, ranging from trying to dispute the death toll to blaming victims for the massacre, claiming it was a reaction to Bosniak provocations.

Only in 2019, the Serbian member of the Presidency of BiH, Milorad Dodik, called the Srebrenica genocide a "fabricated myth" and stated that Bosnian Muslims "have no myths, so they decided to make one about Srebrenica"; then Serbian Defense Minister Aleksandar Vulin announced that "the Serb people survived the genocide and did not commit one", while Republika Srpska President Zeljka Cvijanovic said that the killings of Bosniaks by Bosnian Serbs were revenge for earlier anti-Serb "war crimes against Serbs" which were allegedly committed by Bosnian Muslim forces.

Such a rejection of history runs counter to numerous court rulings detailing the killings of Bosniak men and boys in the Srebrenica enclave, along with the forcible deportation of Bosniak women, children and the elderly, as evidence of an obvious intention to destroy the Bosnian Muslim presence in eastern Bosnia. In a verdict convicting Karadzic of genocide, the ICTY Trial Chamber states that "the only reasonable conclusion" that can be drawn from the killings of Bosniak men and boys in Srebrenica "is that members of the Bosnian Serb forces conducted this operation with the intention of destroying Bosnian Muslims as such. "

The situation gets worse. The perpetrators of the Srebrenica genocide are treated as heroes and role models in today's Republika Srpska. Mladic's huge murals became temples for Bosnian Serbs, and the dormitory was named after Radovan Karadzic with great fanfare.

Speaking at the site of the Nazi concentration camp Buchenwald in Germany, President Barack Obama said of the Holocaust denial committed by Nazi Germany and his associates against the Jews of Europe that he was "baseless, without knowledge and full of hatred." "There is no doubt," Pope Benedict XVI declared, "that any denial or minimization of this horrible crime can be tolerated and is completely unacceptable."

The denial of the Srebrenica genocide is also "baseless, without knowledge and full of hatred." As a moral imperative, the entire international community and BiH leaders must follow others and once and for all reject the denial of the Srebrenica genocide, as Pope Benedict put it, as something that cannot be tolerated "and completely unacceptable."

In Germany and other countries, it is a crime to deny the Holocaust against European Jews. It should be the same when it comes to the genocide in Srebrenica. Like Holocaust denial, denial of the Srebrenica genocide must not be allowed as a legitimate intellectual position. At the very least, those who deny the Srebrenica genocide and celebrate its perpetrators - in BiH and elsewhere - must be exposed, publicly condemned and excommunicated. The victims of Srebrenica and their families deserve at least that.

What can the international community do to improve the situation in BiH? It seems to be slowly giving up on it.

The international community was heavily involved after BiH became a modern state to help it in its early years. It is natural to expect that this involvement will subside over time. Ultimately, it is the responsibility of the people of BiH to take their destiny into their own hands, including rejecting their own ultranationalist incitement to hatred.

At the same time, another question should be addressed to the liberal elements of BiH: how is it possible to allow nationalist parties to dominate the political discussion and thus mislead Serbs, Bosniaks and Croats? Why are there no interethnic parties that can unite all the peoples of BiH together, instead of inciting more and more hatred between them?

The international community can help to some extent, but in the end it is all in the hands of people living "on the ground" to vote responsibly and not allow themselves to be ruled through xenophobia, fear of the "other" or irrational historical hatred.

The Balkans are witnessing the strengthening of fascist, nationalist and extremist rhetoric. How much should we worry about that, considering the past of the Balkans and Europe?

I am sorry to have to say that the Balkans is not the only region where we see the strengthening of neo-fascism and even neo-Nazism. These far-right elements are emerging from the shadows in many parts of the world, from Chile to the US, from Scandinavia and the Baltics to the Balkans.

White supremacists use conspiracy myths and try to use the internet and social networks to spread their hate ideologies. Fortunately, responsible companies and social networks, such as Facebook, which work closely with the World Jewish Congress and other organizations, are fighting these inciters of hatred and their violence on their platforms.

Considering everything, how do you see the future of BiH and the Balkans?

I am an optimist and I would really like to see BiH become a progressive state that will, one day in the near future, be part of the family of the European Union. However, in order to make this possible, BiH citizens, along with their leaders, will need to show affirmatively how they have moved away from the hatreds of the past.

I am sure that the international community will help them in this, but they must first help themselves. Calls for hatred and hate advocacy must be erased and replaced by truly democratic values, and a spirit of sincere reconciliation.