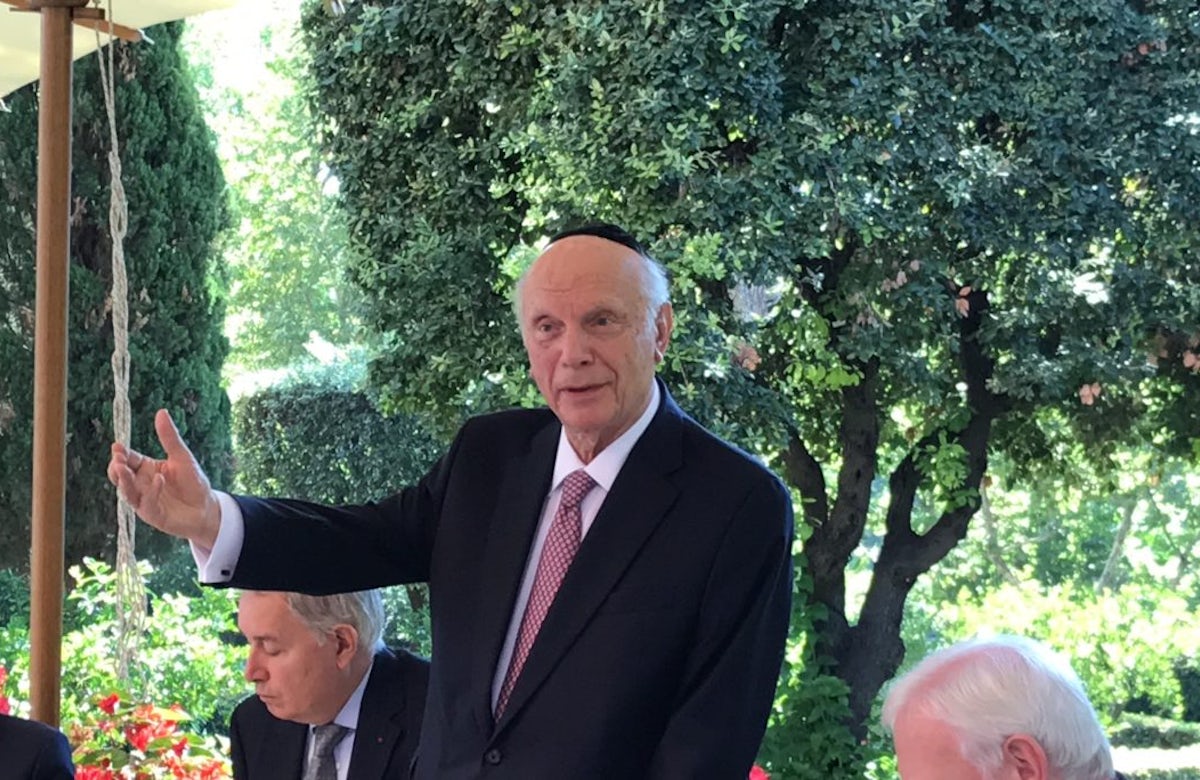 Photo credit: US Embassy to the Holy See

When Rabbi Arthur Schneier, one of the giants of American and world Jewry, turned 90 earlier this year, World Jewish Congress President Ronald S. Lauder recalled how the preeminent New York rabbi had set the tone at a 1988 commemoration of the November 1938 Kristallnacht pogrom during which synagogues and Jewish homes and businesses were burned, looted, and destroyed throughout Germany, Austria, and German-occupied Czechoslovakia.

That event at the 92nd Street Y, sponsored by Ambassador Lauder, featured a documentary about Kristallnacht and numerous prominent speakers, but “it was Rabbi Schneier who . . . drove home the significance of Kristallnacht. He explained in brilliant rabbinic terms why Kristallnacht was important for everyone—Jews and non-Jews alike—and why something like this must never be repeated ….. Rabbi Schneier’s words have echoed now for more than 30 years because he spoke not just as the brilliant rabbi that he is, but as someone who was personally impacted by the event, having been born in Austria and having to emigrate as a young child to the United States.”

“I am fortunate,” Ambassador Lauder continued, “to have had his wise counsel and his friendship.”

Rabbi Schneier was born in Vienna on March 20, 1930. He survived the Holocaust in Nazi-occupied Budapest, immigrated to the US in 1947, and received his rabbinical ordination from Yeshiva University in 1955. Since 1962, he has been the Senior Rabbi at Park East Synagogue in Manhattan. He is the founder and President of the Appeal of Conscience Foundation, an interfaith coalition working on behalf of religious freedom and human rights throughout the world.

During his extraordinary career, he has held numerous positions in public life, including as a US Alternate Representative to the UN General Assembly and Chairman of the US Commission for the Preservation of America's Heritage Abroad. In 1998, he was one of three American religious leaders appointed by President Clinton to start the first dialogue on religious freedom with President Jiang Zemin and other top Chinese leaders, and he initiated the Resolution for the Protection of Religious Sites, adopted by the UN General Assembly in 2001. In 2001, President Clinton presented Rabbi Schneier with the Presidential Citizenship Medal.

A former Vice President of the World Jewish Congress and Chairman of its American Section, Rabbi Schneier presently serves as an Honorary WJC Vice President.

On March 20, 2020, Russian President Vladimir Putin awarded him the Order of Friendship “for merits in sustaining peace, promoting friendship and understanding between nations, preserving the memory of the Second World War and fostering inter-religious dialogue.”

US President Donald J. Trump lauded Rabbi Schneier as “a tireless champion of peace and religious liberty around the world.” Former US Vice President Joe Biden expressed his gratitude for Rabbi Schneier’s “lifetime efforts to unify people of all faiths and achieve peace in corners of the world that have experienced so much suffering.” UN Secretary-General António Guterres called Rabbi Schneier “an inspiration for the world and for the United Nations.”

“Year after year,” wrote New York Governor Andrew M. Cuomo, Rabbi Schneier has “served as a powerful voice for peace, unity, and intercultural understanding while teaching us all indelible lessons in strength, courage, and perseverance.”

In a message to his Park East Synagogue community, Rabbi Schneier said: “As a survivor of the Holocaust, I have kept my promise to serve God, the Jewish people and Humanity.”