Pope: 'A true Christian cannot be an anti-Semite' 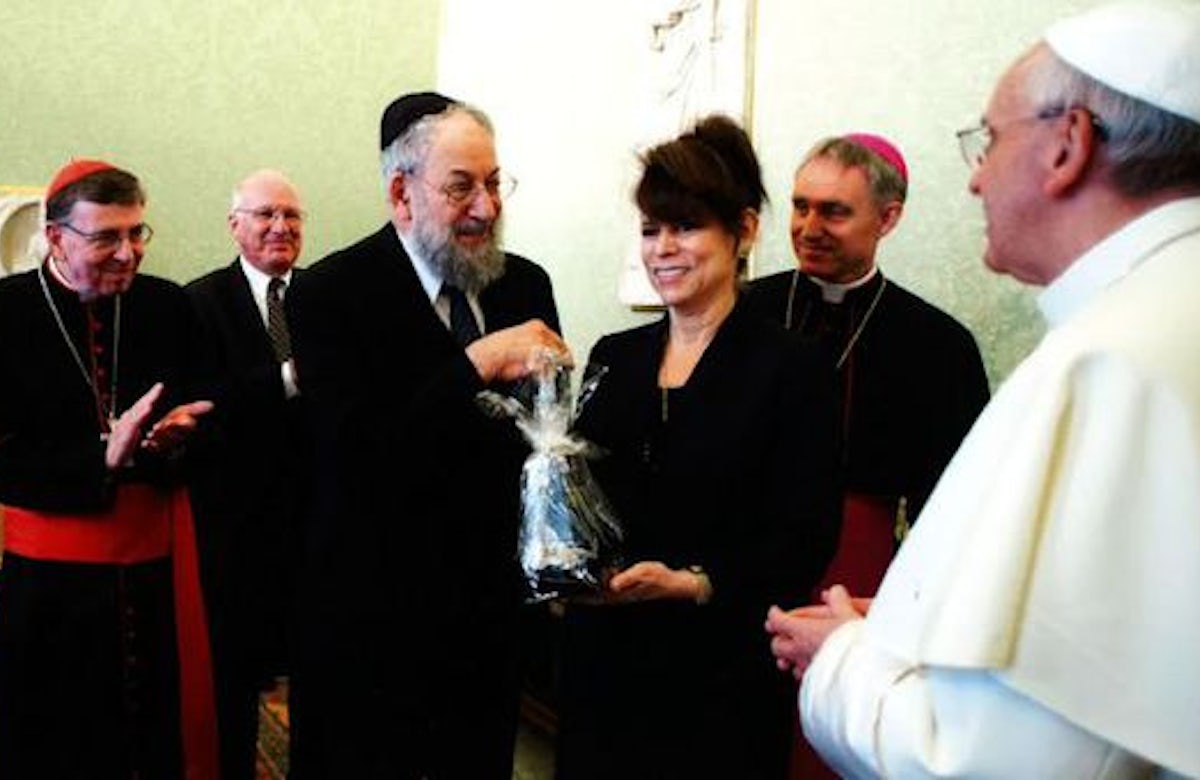 Pope Francis has again firmly condemned anti-Semitism and said it had no place in the church. "Because of our commons roots, a true Christian cannot be anti-Semitic," Francis said on Monday at a meeting with a delegation of the International Jewish Committee on Interreligious Consultations (IJCIC). The Catholic pontiff, who was elected in March as successor to Pope Benedict XVI, reiterated that the declaration 'Nostra Aetate' remained the key point of reference for Catholic relations with the Jewish people. The declaration, adopted at the end of the Second Vatican Council in 1965, stresses the religious bond shared by Jews and Catholics, reaffirms the eternal covenant between God and the Jewish people, and calls for a halt to attempts to convert Jews. 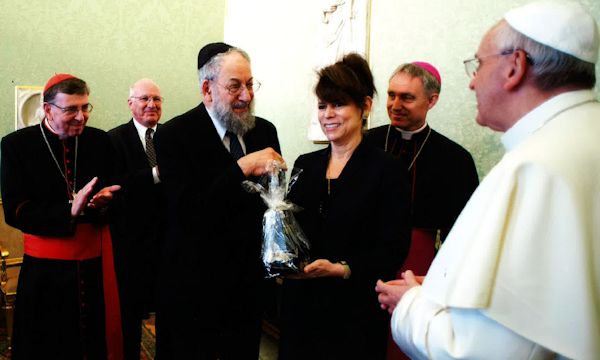 Francis also added that the Church "firmly condemns hatred, persecution and all manifestations of anti-Semitism." He also highlighted the role played by his predecessors in fostering better relations with the Jews. The pope highlighted the fact that the meeting was the first occasion he was addressing an official group of representatives of Jewish organizations and communities since become pontiff.

IJCIC Chairman Lawrence Schiffman expressed great appreciation for the close relationship, friendship and cooperation that has been developed between IJCIC and the Vatican over time and said that IJCIC was "gratified that the Vatican maintains diplomatic relations with the State of Israel and has excellent relations with many Jewish groups and with Jewish communities around the world." Schiffman said IJCIC would continue to seek common ground in order to work on issues of mutual concern, such as religious freedom, and the fight against racism, anti-Semitism and bigotry.

"We were profoundly gratified by Pope Francis's encouraging words which increase our confidence that when Jews and Catholics work together we can succeed," Schiffman said after the audience.

On behalf of the World Jewish Congress, Betty Ehrenberg, executive director of WJC-North America and vice-chair of IJCIC, Maram Stern, WJC associate executive vice-president, and Rabbi Joel Meyers, chair of the WJC American Section, also took part in the audience at the Vatican.

Text of the address of Pope Francis to the IJCIC delegation (Source: Vatican Radio)

With this greeting, dear also to the Christian tradition, I am pleased to welcome a delegation of representatives of the International Jewish Committee on Interreligious Consultations. 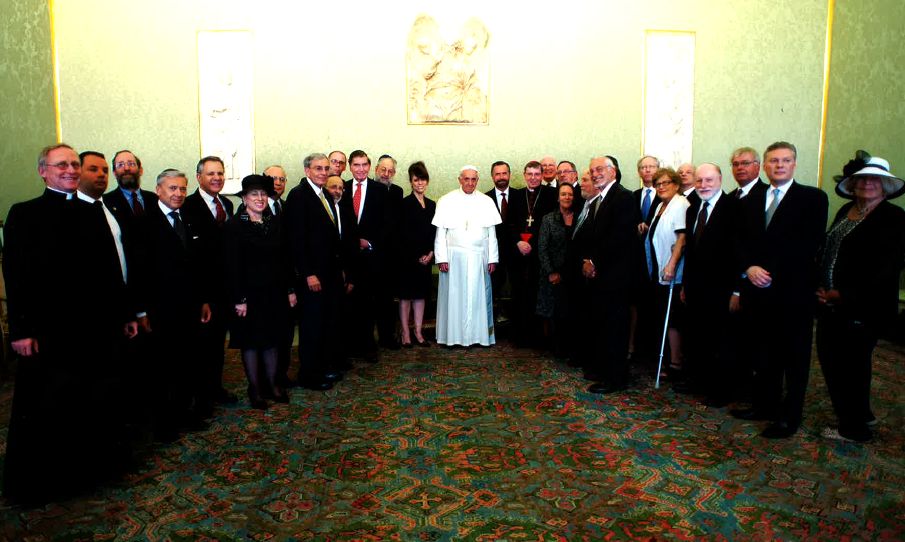 I greet Cardinal Koch, as well as the other members and officials of the Commission for Religious Relations with the Jews, with whom you have continued a regular dialogue for more than forty years. The twenty-one meetings held until today have certainly helped to reinforce mutual understanding and the links of friendship between Jews and Catholics. I know that you are preparing the next meeting in October in Madrid and that it will have as its theme Challenges to Faith in Contemporary Society. Thank you for your commitment to this!

In these first months of my ministry I have already had the chance to meet important personalities of the Jewish world, but this is the first time I have talked with an official group of representatives of Jewish organizations and communities, and so I cannot fail to mention what was solemnly stated by the Second Vatican Council in paragraph 4 of the Declaration Nostra Aetate, as it remains for the Catholic Church a key point of reference for relations with the Jewish people.

In that Council text, the Church recognizes that “the beginnings of its faith and election are to be found in the patriarchs, Moses and prophets”. And, with regard to the Jews, the Council recalls the teaching of Saint Paul, who wrote “the gifts and the call of God are irrevocable” and who also firmly condemned hatred, persecution and all forms of anti-Semitism. Due to our common roots, a Christian cannot be anti-Semitic! 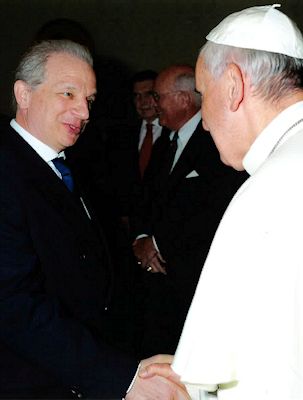 The fundamental principles expressed by the Declaration have marked the path of greater awareness and mutual understanding trodden these last decades by Jews and Catholics, a path which my predecessors have strongly encouraged, both by very significant gestures and by the publication of a series of documents to deepen the thinking about theological bases of the relations between Jews and Christians. It is a journey for which we must surely give thanks to God.

Having said that, this is only the most visible element of a whole movement to be found here and there throughout the world, as I know from personal experience. During my time as Archbishop of Buenos Aires, I had the joy of maintaining relations of sincere friendship with leaders of the Jewish world. We talked often of our respective religious identities, the image of man found in the Scriptures, and how to keep an awareness of God alive in a world now secularized in many ways. I met with them on various occasions to discuss the challenges which Jews and Christians both face.

But above all, as friends, we enjoyed each other’s company, we were all enriched through encounter and dialogue, and we welcomed each other, and this helped all of us grow as people and as believers.

This has happened in many other places in the world, and these friendly relations are in a way the basis for the development of a more official dialogue. So I encourage you to follow this path trying, as you do so, to involve younger generations. Humanity needs our joint witness in favor of respect for the dignity of man and woman created in the image and likeness of God, and in favor of peace which is above all God’s gift. As the prophet Jeremiah said, “I know the plans I have for you, says the Lord, plans for welfare and not for evil, to give you a future of hope” (29:11).

With this word, Peace – Shalom – I conclude my words, asking for your prayers and assuring you of my own.