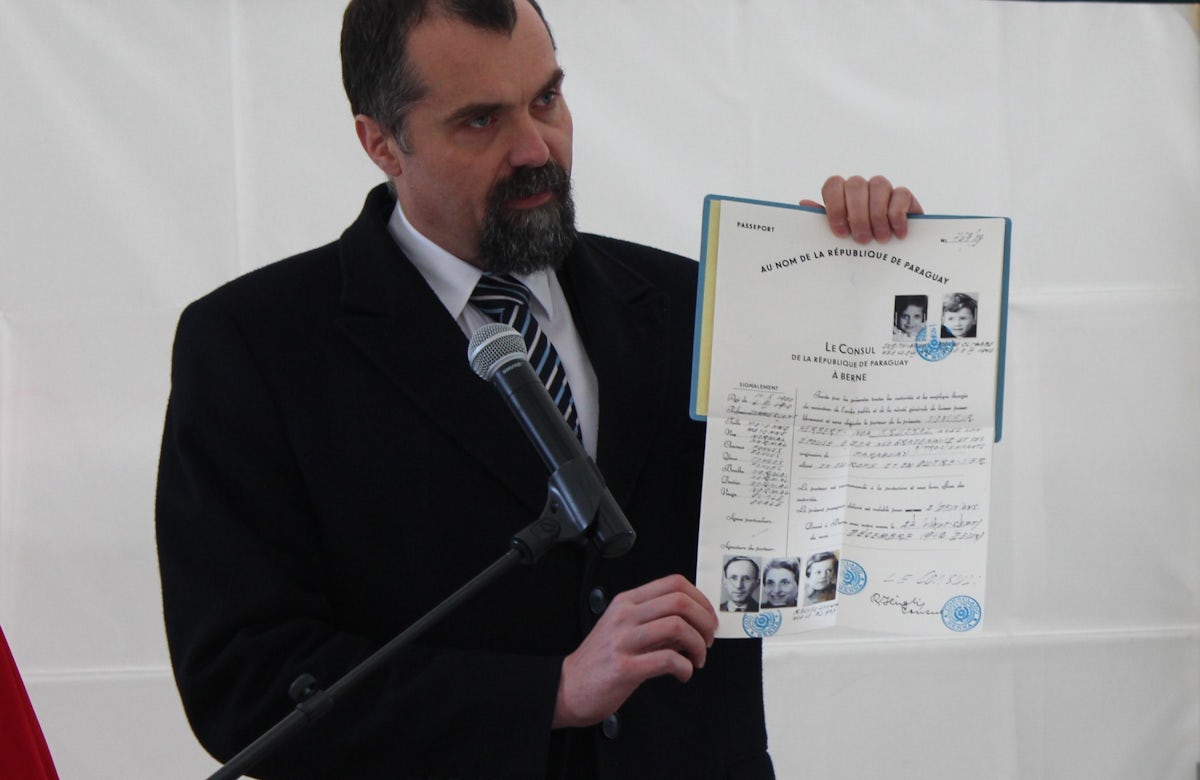 Photo: Ambassador of Poland to Switzerland, Dr. Jakob Kumoch, at the unveiling of the plaque honoring Abraham Silberschein in Geneva.

GENEVA - The World Jewish Congress unveiled a plaque in Geneva last week, together with the City of Geneva and the Embassy of Poland in Switzerland, in memory of Dr. Abraham Silberschein, a World Jewish Congress official and a former member of the Polish parliament, who was a key figure behind the forging of thousands of Latin American passports and identity documents for in an attempt to save Jews trapped in Nazi-occupied countries and territories.

Silberschein was a member of the Bernese Group – or the Ładoś Group, so named after Ambassador Aleksander Ładoś, the representative in Switzerland of the London-based Polish government in exile during the Nazi German occupation of Poland, under whose protection and direction a team of Polish diplomats stationed in Switzerland and several Jewish activists operated to forge these documents, an initiative that was largely funded by the World Jewish Congress.

The plaque in honor of this heroism was unveiled on Friday at rue des Pâquis 22, where Silberschein spent the WWII years.

In early March, at the Hebrew Union College – Jewish Institute of Religion in New York, the World Jewish Congress and the Warsaw-based Pilecki Institute launched the English version of The Ładoś List, a comprehensive publication presenting previously unrevealed details, as well as a full index of the names of the 3,253 Jews who received or were meant to receive these documents. The book debuted in December in London.

The newly unveiled findings indicate that these Polish diplomats based in Bern attempted to save between 8,000 and 10,000 Jews from Nazi deportation using these documents.

The publication of the Ładoś List is the result of two years of painstaking research conducted by the Pilecki Institute, together with the Jewish Historical Institute of Warsaw, the Auschwitz-Birkenau Memorial Museum, and the Polish Institute of National Remembrance. It is one of the most comprehensive Holocaust research projects conducted in recent years and was made possible through access to various reputable archives, including Bad Arolsen, Yad Vashem, the Polish Central Archives of Modern Records, and others, according to Pilecki Institute Director Dr. Wojciech Kozłowski.

Abraham Silberschein had been a prominent leader of the Labor Zionist Movement in Poland during the inter-war years. In 1922, he was elected by the movement to represent the Labor Zionists in the Polish Sejm, or parliament. He moved to Geneva in 1939 to establish the Relief Committee for the War-stricken Jewish Population (RELICO), under the umbrella of the World Jewish Congress, which was then focusing its efforts on relief for Jews in ghettos in Poland, the search for missing relatives, and the provision of monetary and legal assistance to Jewish refugees. One of the beneficiaries of these actions was the future French Prime Minister Pierre Mendès-France, who, with the help of a forged passport, was able to escape to Portugal and join the Free French movement in London.

The unveiling ceremony in Geneva on 13 March was kept small in light of the spreading coronavirus (COVID-19), with the participation of Polish Ambassador to Switzerland Jakub Kumoch, who served as editor of The Ładoś List, Geneva City Councilor Rémy Pagani, World Jewish Congress representative in Geneva Leon Saltiel, and Leonie de Picciotto, the descendent of Jews who were saved thanks to a forged Paraguayan passport.

Former Swiss President Ruth Dreifuss, Chief Rabbi of Geneva Itzhak Dayan, Ambassador Aviva Raz Shechter,  Permanent Representative of Israel to the United Nations in Geneva, Ambassador Zbigniew Czech, Permanent Representative of Poland to the UN in Geneva, Chef de Cabinet of the Director-General of the UN Office in Geneva David Chikvaidze, member of the Swiss Federal Parliament Michel Matter, representatives of the Geneva cantonal and city authorities, and diplomats from Poland and Greece also took part in the ceremony.