Photo expo dedicated to Holocaust survivors on display at UN in Geneva, with support of WJC - World Jewish Congress

Photo expo dedicated to Holocaust survivors on display at UN in Geneva, with support of WJC 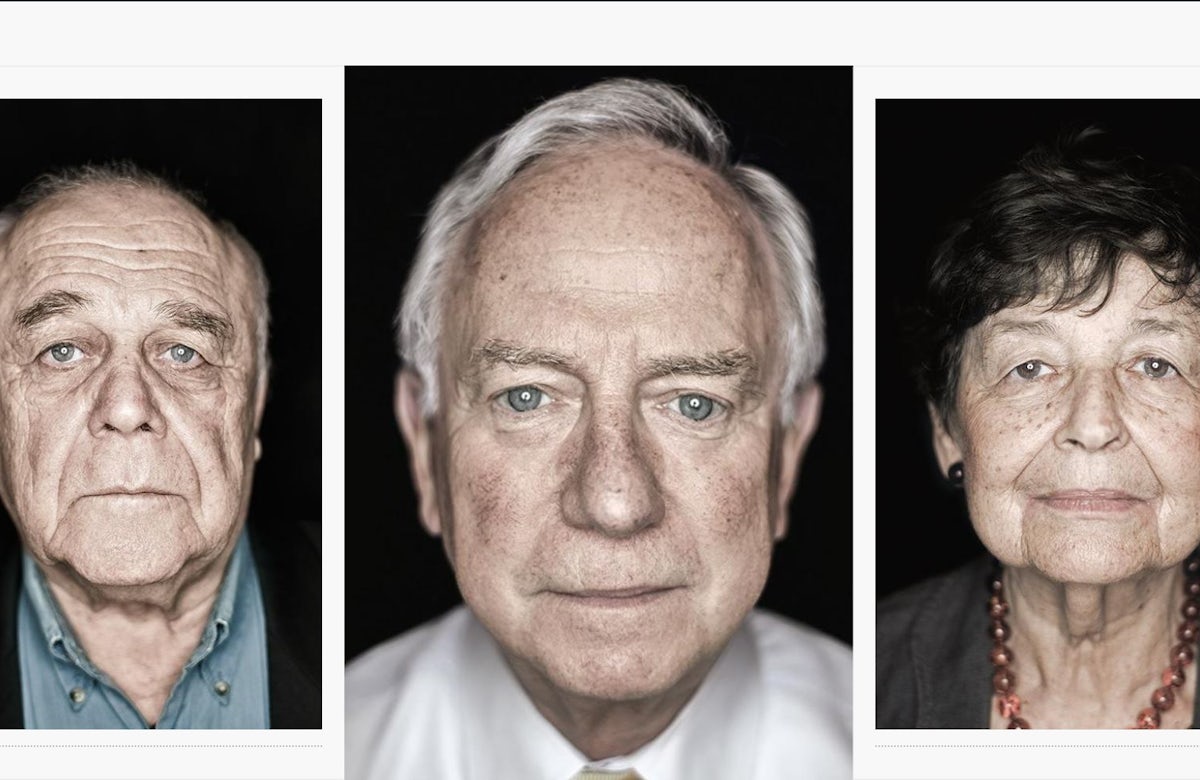 GENEVA - A photo installation dedicated to the preservation of Holocaust memory opened at the United Nations Palais de Nations in Geneva on 24 January 2020, supported by the diplomatic missions of the European Union, Austria and Germany, as well as the Swiss Foreign Ministry, UN Human Rights Office and the World Jewish Congress.

LEST WE FORGET features the work of German-Italian photographer and filmmaker Luigi Toscano, whose collection of approximately 100 portraits of survivors of Nazi persecution will be on display at the UN Palais as well as the Place des Nations until 31 January. The photo installation accompanies the commemorative events around the International Holocaust Remembrance Day, observed on 27 January. The Remembrance Day was initiated by the United Nations in 2005 to commemorate the liberation of the Auschwitz- Birkenau concentration camp on 27 January 1945.

The opening of the exhibition took place on 24 January in the 'Hall des Pas Perdus' of the UN Palais in the presence of the President of the Human Rights Council, Ambassador Tichy-Fisslberger, high-ranking diplomats and representatives of the Jewish community, and with the Ambassadors of the European Union, Germany and Israel delivering opening remarks alongside the artist and the Geneva representative of the WJC, Dr. Leon Saltiel.

For his project LEST WE FORGET, Luigi Toscano has been meeting and portraying survivors of Nazi persecution since 2014. More than 400 of these encounters have already taken place in Germany, USA, Austria, Ukraine, Russia, Israel, the Netherlands and Belarus.

The artist displays the supersized portraits of survivors in central locations that are accessible to everyone - parks, public squares or house facades. As such, the portraits and the survivors find direct access to the everyday life and consciousness of the people - regardless of their origin, age or educational background. More than a million visitors have already experienced the exhibition, including in Berlin, Kiev, New York City, Washington D.C., and Vienna. LEST WE FORGET provides a human and emotional face to remembering the atrocities of the Holocaust, as its fights against any form of exclusion, in favor of tolerance, democracy and human rights. 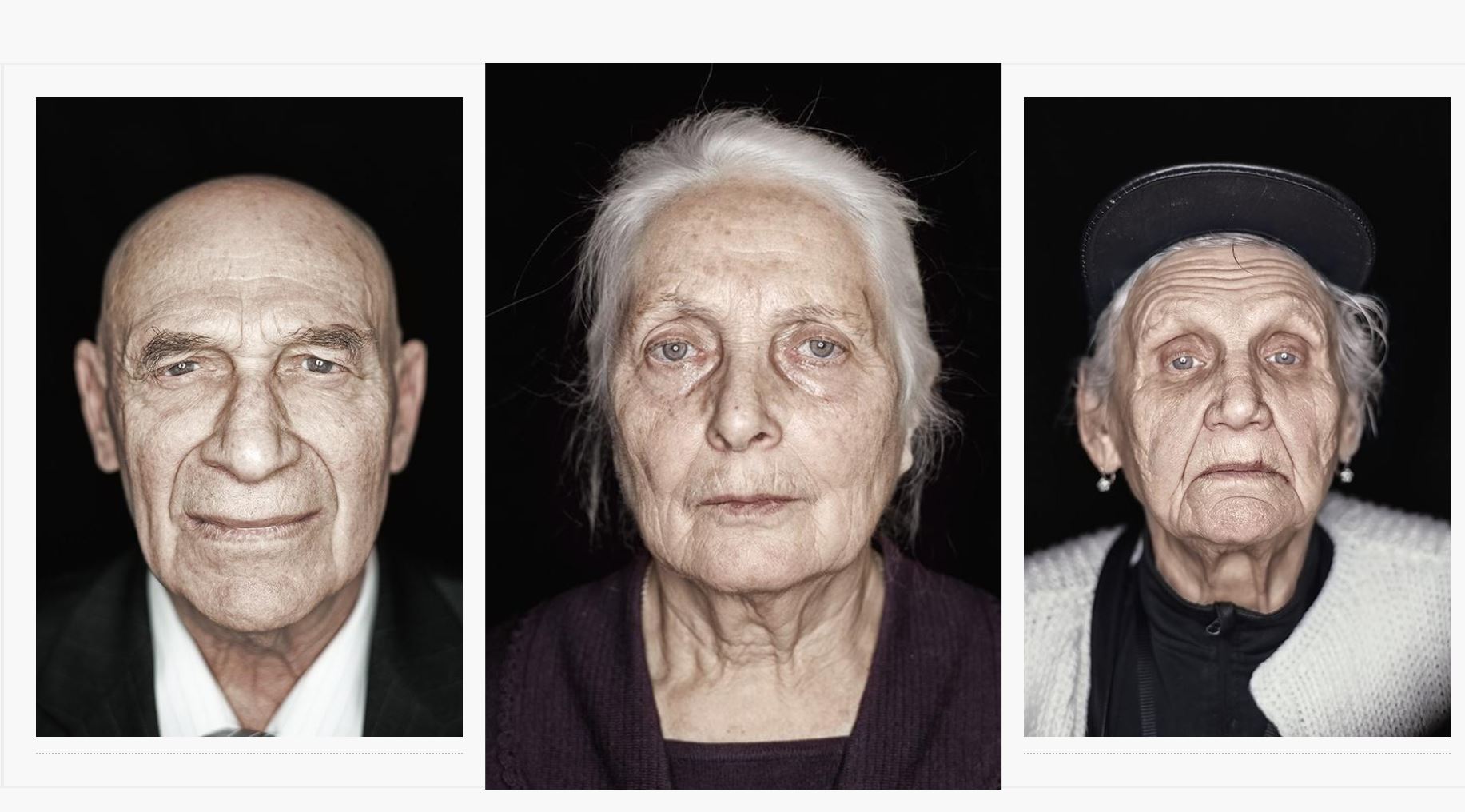 Since the beginning of the project in 2014, the fight against forgetting has become even more urgent. 75 years after the liberation of the concentration camps, the crimes committed under Nazism cannot be allowed to be forgotten. According to a study by the European Commission, Jews in Europe again are fearful to exercise their faith, so that almost 40 percent of them are thinking about leaving Europe. While 1 in 3 Europeans says they know "only a little" about the Holocaust, 1 in 20 has never heard of it. But Luigi Toscano is certain: "Our democracy will win. The support, compassion and humanity that we experienced after attacks on the photos in Vienna reaffirmed me in this belief. After the violent destruction of several of the portraits in May 2019, a spontaneous act of solidarity developed into the movement "We are vigilant". The vigil was jointly organized by the Muslim Youth Austria, the Young Caritas, the Catholic Youth Austria, the artist group Nesterval, and the Jewish Students Union, and thousands took part."

LEST WE FORGET is a multimedia project composed of further smaller projects in addition to the photo installation: The illustrated photo book has just been published in its second edition and the documentary celebrated its debut at the Seattle International Film Festival in May 2019.

Photographer and filmmaker Luigi Toscano found his calling late in life and has an eventful past. As roofer, door man and window cleaner, the son of Italian guest-workers experienced his surroundings from many different perspectives. That this past developed into a career as artist is not common. But for Luigi Toscano, it was a necessity, because there are too many visions and stories in his head that needed to be shared and needed to be told.

It was not until his late twenties that Luigi Toscano discovered photography for himself. He learned the technical and manual photography skills largely by himself. Equipped with basic knowledge and equipment, he began to experiment the possibilities. After a short time only, he debuted with his first exhibition "Colorblind". Later, Luigi Toscano added filmmaking to his artistic portfolio, for which he worked out the technical skills on his own as well.

Luigi Toscano's works put people in the center of the lens and tells the stories behind the visible. For the photographer and filmmaker, art is a universal language that is understood by everyone. The artist uses art to set clear social and political signals. To this end, he takes over the public space. House facades, public squares or parks: instead of being shielded away in inapproachable museum, Luigi Toscano's art work is displayed in publicly accessible places.

This concept was used for the first time in 2014: With "Heimat_Asyl", Luigi Toscano brought the oversized portraits together with the stories of asylum seekers to a central square in his hometown Mannheim - and thus into the everyday consciousness of thousands of people. Also in 2014, he launched his project LEST WE FORGET, which has reached around one million people around the world so far - and even though the journey of the Holocaust survivor portraits is far from its end, Luigi Toscano is already planning new projects.

At the UN Headquarters in New York, a separate exhibition entitled 'Seeing Auschwitz' is currently on display through 24 February 2020.

The primary focus of this exhibit is on archival images of Auschwitz, what they reveal about their creators’ perspectives, and how this can influence how we “imagine” and understand Auschwitz today. Through the photos, visitors will explore different ways of “Seeing Auschwitz,” revealing myriad perspectives and multi-dimensional ways of thinking about the space, its history, and meaning-making today.

The exhibition is organized by Musealia and the Auschwitz-Birkenau State Museum, with the support of The Holocaust and the United Nations Outreach Programme. For more information: Portraits show ‘dignity and humanity’ of Holocaust survivors, 75 years after Auschwitz liberation