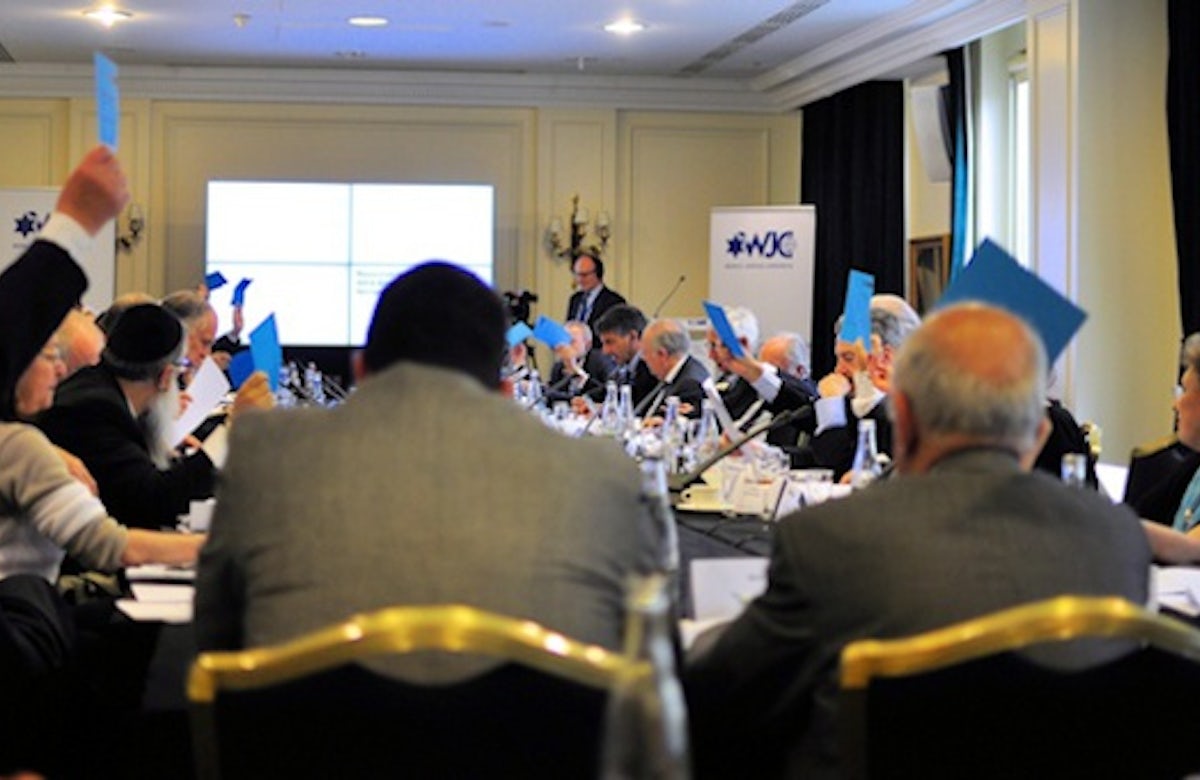 PARIS - The situation of Jews in Ukraine, and in France; growing anti-Semitism in Europe; the boycott campaign against Israel; and the upcoming 20th anniversary of the AMIA center bombing in Argentina were among the topics discussed by the members of the Executive Committee of the World Jewish Congress (WJC) on Monday and Tuesday in the French capital Paris.

The Jewish leaders praised new French Prime Minister Manuel Valls for acting with determination against the anti-Semitic comedian Dieudonné and backed as “entirely legitimate” measures to restrict free speech where it is deemed necessary by the local Jewish community to protect “citizens from the spread of anti-Semitic and racist incitement.” The meeting was chaired by WJC President Ronald S. Lauder.

The Executive heard a presentation from Vice-President Roger Cukierman, the head of the French Jewish umbrella body CRIF, who expressed grave concern at the recent growth of anti-Semitism in the country, which has the third largest Jewish community in the world and the largest in Europe. In a resolution, the members of the WJC Executive expressed “great appreciation to President François Hollande and his government for their strong fight against anti-Semitism.” 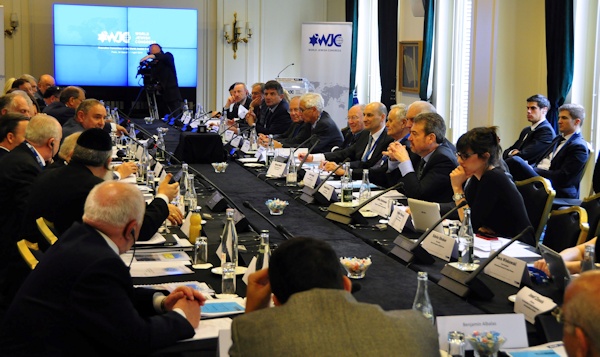 The WJC also welcomed action taken by French Interior Minister Manuel Valls - who was appointed as new French prime minister by Hollande on Monday - to seek bans against performances by the anti-Semitic comedian Dieudonné M’bala M’bala for incitement against Jews.

Fight against racism and hate speech

The WJC lauded a five-match ban and fine imposed by England’s Football Association on the French player Nicolas Anelka for showing the Nazi-style ‘quenelle’ salute in solidarity with his friend Dieudonné during a match and urged the European soccer federation UEFA to “ensure that strong action is taken against any expression of racism and anti-Semitism in stadiums.”

The Jewish leaders, which included representatives from over 20 Jewish communities, including Argentina, Australia, Canada, Russia, South Africa, Ukraine and the United States, also called on the government of Australia “not to repeal or reduce the impact of those sections of the Racial Discrimination Act that have for over 20 years, protected the Jewish and other religious and ethnic communities from hate speech, including Holocaust denial.”

The WJC also expressed support for the efforts of the Greek Jewish leadership to combat rising anti-Semitism in Greece and commended the Greek authorities for bringing to bear the full force of the law on the leaders of the extreme-right and anti-Semitic Golden Dawn party who are alleged to have been involved in criminal activities. Furthermore, the Executive called on the Greek government “to honor its pledge and urgently implement adequate legislation against hate crimes and incitement to racial hatred.

Situation of Jews in Ukraine

The WJC Executive also discussed the situation in Ukraine and heard presentations from WJC Vice-Presidents Yaakov Bleich (chief rabbi of Ukraine), Boris Fuchsmann (Jewish Confederation of Ukraine) and Josef Zissels (VAAD of Ukraine), who voiced their opinions on the severity of the situation. 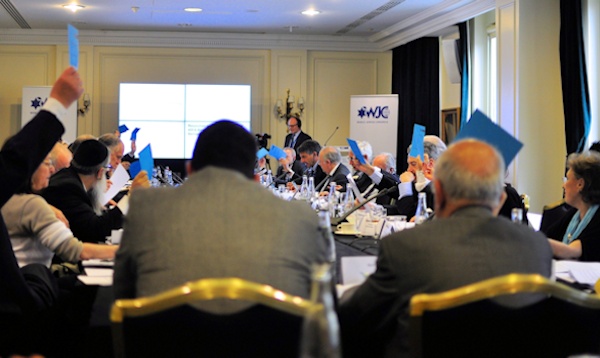 In a resolution adopted with near unanimity, the WJC noted “that recent political developments have created a complex situation and has raised a feeling of insecurity not only among some Jews, but also members of other religious or ethnic minorities, in Ukraine, recognizes the new Ukrainian government’s assurances and actions, that Jews and Jewish life in Ukraine will be protected, and expresses concern that the ultra-nationalist Svoboda party is represented in the new Ukrainian government, and that other extremist groups have played a prominent role in recent protests.”

The text also “urges all parties to ensure that anti-Semitic and anti-minority incitement is not tolerated, and further that the ethnic, cultural, religious, and linguistic expression of all minorities is protected” and “condemns all anti-Semitic attacks in Ukraine and calls on the Ukrainian authorities to properly investigate them and bring the perpetrators to justice.”

The WJC Executive also urged “all governments, media and non-governmental organizations and their representatives not to cause this complex situation to deteriorate by making unfounded accusations, or giving exaggerated accounts, of the situation of the Ukrainian Jewish population, calls on the authorities in Ukraine to reinforce security to protect Jewish and other ethnic minorities’ sites in the country.”

In another resolution, the WJC Executive decided that the fight against the anti-Israeli Boycott, Sanctions and Divestment (BDS) movement was a top priority for the organization. “Underpinning the BDS movement is the notorious canard that Israel is an apartheid state and that the BDS campaign has articulated as one of its principal aims achieving equal rights for Arab citizens of Israel” who in fact already “enjoy full civil and political rights”, the resolution states.

In a separate motion, adopted unanimously, the World Jewish Congress reiterated its longstanding support for the two-state solution “as the only workable, realistic and principled basis for a true and lasting peace” between Israelis and Palestinians. 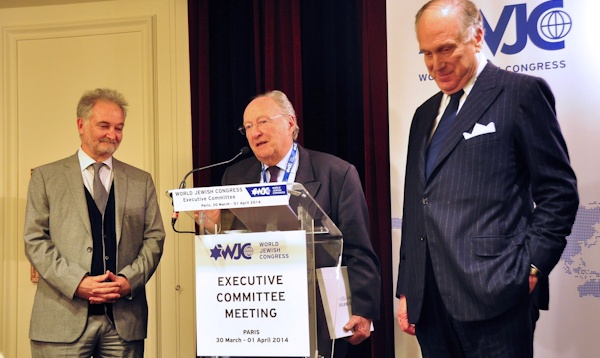 The WJC “urges all parties not to relent in their efforts to reach a fair conclusion” of the peace talks, “commends the considerable efforts undertaken by the United States Administration, and in particular by Secretary of State John F. Kerry, calls upon the Palestinian leadership to recognize Israel as the Jewish state as a matter of reality and to engender an atmosphere of trust” and also “rejects as completely unhelpful and counterproductive recent criticism expressed by several Israeli politicians, that the United States may not have Israel’s true interests at heart and is not a true friend of the Jewish state.”

‘Argentina should rescind memorandum with Iran’

Following a presentation by WJC Vice-President Julio Schlosser, the head of the Argentine Jewish umbrella body DAIA, the Executive Committee adopted a resolution which calls on the government of Argentina to rescind the memorandum of understanding signed last year with Iran “as the Iranian regime sponsors terrorism and has systematically refused to cooperate with Argentina in the investigation of this despicable attack”, which occurred on 18 July 1994, left 85 people dead and is being blamed by the Argentine judiciary on Iran.

In a resolution on the controversy about Holocaust remembrance in Hungary, the WJC Executive lamented that “Hungarian authorities have done little to prevent the erection of statues in honor of [Nazi-allied Regent Miklós] Horthy” as his administration had facilitated “the sending of tens of thousands of Hungarian Jews to their death at the hands of the Nazis.”

The World Jewish Congress reaffirmed its full support for the decision by its Hungarian affiliate Mazsihisz “not to take part in official events to mark Holocaust Remembrance Year” over a series of highly controversial projects that depict all Hungarians as victims of Hitler Germany. It called “on the Hungarian government to change its practice of commemoration policy and to cease to minimize the responsibility of Hungarians in the Holocaust” and urged it “to try to normalize relations with Mazsihisz, the representative body of Hungarian Jewry.”

The WJC Executive received an updated report written by the British journalist Robin Shepherd into the threat posed by neo-Nazi and other extremist political parties in Europe. The first version of this widely noted report was release last May at the WJC Plenary Assembly in Budapest.

In a resolution on this issue, the WJC Executive Committee “expresses serious concern that such parties are predicted to make big gains at the forthcoming European Parliament elections and at national and local elections in a number of countries across Europe, reaffirms the resolution adopted at the last meeting of the WJC Executive Committee in Jerusalem in October 2013 which calls for the creation of a ‘cordon sanitaire’ on all levels (local, regional, national, European) vis-à-vis extremist parties and for the adoption of a ‘no platform’ policy towards those parties in order to ensure that they are completely marginalized in any decision-making process."

The WJC Executive also "urges European nations to take all lawful measures at their disposal, to diminish the effect of, or ban, such extremist parties and, if necessary, to establish the legal framework for decisive action against such of them as pose a threat to democracy and thus follow the example of the Greek authorities against Golden Dawn.”

The WJC called “on all democratic political forces in Germany, to actively support an attempt by the federal states (‘Länder’) to have the extreme-right and anti-Semitic National Democratic Party banned by the Constitutional Court.”