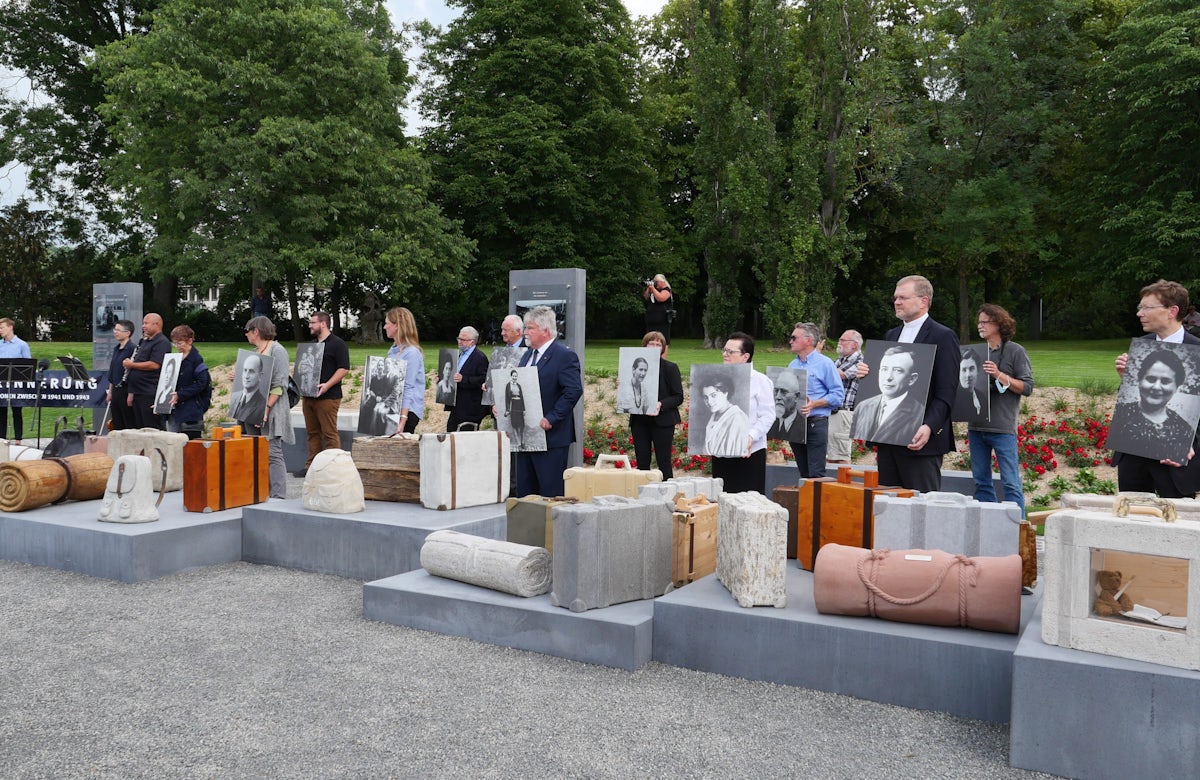 Würzburg, Germany - In the midst of the coronavirus pandemic, a new memorial site honoring Jews deported to concentration camps by the Nazis during the Holocaust was unveiled on 17 June in the Bavarian city of Würzburg, in the region of Lower Franconia.

Another token of the biggest crime against humanity and the darkest moment in German history. Another silent witness of the destiny Jews faced in Europe 80 years ago.

The memorial was built squarely in front of Würzburg’s Central Station, with empty suitcases and luggage on display, as a symbol to the possessions abandoned by the more than 2,000 Jews who were deported to concentration camps from that very train station between 1941 and 1944.

Only 20 of these deportees returned to Würzburg after the war, to build a new Jewish community that today numbers 1,000 members and is headed by Dr. Josef Schuster, who is also the President of the Central Council of Jews in Germany and a World Jewish Congress Vice President.

Artist Matthias Braun, who conceived of these visuals, wanted to engage visitors with a modern approach by featuring QR codes on the suitcases that can be scanned on mobile devices to allow those observing the memorial to learn more about the history and the humanity of the Jewish families that once lived in the 109 Jewish communities that existed in the region prior to the war.

The memorial is poignantly titled DenkOrt Deportationen 1941–1944, with the first word literally translated to mean “a place to think,” emphasizing the critical nature of reflecting on the history beyond its mere visual reception.

Increasingly, there are voices within Germany society questioning whether another memorial to the Jewish victims of the Holocaust is even necessary in Germany. The reasons for this question may vary: some believe there are sufficient reminders of this shameful past and do not want to be confronted with these memories any more than they have to; others doubt whether a memorial is an effective means in the fight against antisemitism and bigotry today, and wonder whether it can have a sustained impact on society. Those behind the latter line of thinking are concerned that these memorials may quickly be relegated to token sites visited only on International Holocaust Remembrance Day on 27 January or on the anniversary of Pogromnacht on 9 November.

As an active member of the Jewish community in Germany, I strongly believe that these memorials have an even greater importance today than ever, as the number of Holocaust survivors among us dwindles and their testimonies become stories of an even more distant past.

We are living in a transitional period in which we must shift our understanding of the tragedy of the Holocaust from dynamic communicative memory to a more static, cultural memory.

Now is the time to strengthen and foster the remembrance of the Holocaust in order to safeguard the future of remembrance. We need visible signs, symbols, and memorials in the middle of our city squares, to stand as a pillars for sustained future remembrance.

Still, we must keep in mind that monuments can never replace the testimonials of survivors. Not even words cannot describe the inhuman dimension of the Holocaust -how could a monument made of inanimate material convey this tragedy and pain?

The new memorial in Würzburg shows us that we still have not yet fully come to terms with history. In particular, Bavarian Commissioner for Combating Antisemitism Ludwig Spaenle’s description of the memorial as proof that both German state and society stand in solidarity with the Jews left me wondering, was this display built just for us Jews? Do we need another monument to remind us of the persecution and fate of our people? As a Jew in Germany, I often feel like I myself am a living memorial, a historic relic of flourishing Jewish past in Germany, the rebirth of which is sheer proof that good ultimately did defeat evil.

Memorials as authentic sites are essential for Holocaust education, and for the critical acknowledgment that the Holocaust took place at the very center of German cities and society.

That said, it is time that politicians and others stop thinking that these memorials must be built to commemorate murdered Jews in order to please living Jews.

It is not we, Jews, who need memorials to the Holocaust. We carry these memorial sites with us daily, in our personal stories, our familial experiences, in our minds and in our hearts.

These memorials are meant for German society as a whole, of which the Jewish citizens are a part. Remembering the Holocaust is not an expression of solidarity with Jews, but rather an embrace of our collective responsibility toward the future of our society.

It has been said for decades that Jews in Germany are constantly sitting, metaphorically speaking, on our suitcases, uncertain of how long we will stay, and always prepared to leave.

But the younger generation of Jews long decided to unpack these suitcases, as a matter of course. Given the new rise of antisemitism, we must ensure that these suitcases remain unpacked, and that our place in German society stay firmly folded and secure. Consequently, all of society must learn the lessons of the past and combat all forms of antisemitism.

Standing in front of the empty suitcases on display in Würzburg, I wonder, what might they once have contained? Children’s toys, clothing, Judaica – this is certain, but above all, I have to think that these suitcases were filled with dreams, with yearnings, and with hopes for the future. Anticipation of milestones and occasions that never came to pass. All that remains is emptiness.

And now, nearly eight decades after the end of the Holocaust, it is our duty to change this emptiness, to shift it into something meaningful. It is our duty, as Jews, to live a proud and secure Jewish life in Germany, and to remember the many lives snuffed in ash, out of which we – the Jewish community of today – have risen.

Micky Fuhrmann is a member of the flagship program of the World Jewish Congress, the WJC Jewish Diplomatic Corps, a worldwide network of Jewish young professionals acting in the fields of diplomacy and public policy.

For more information on the memorial, visit https://denkort-deportationen.de/