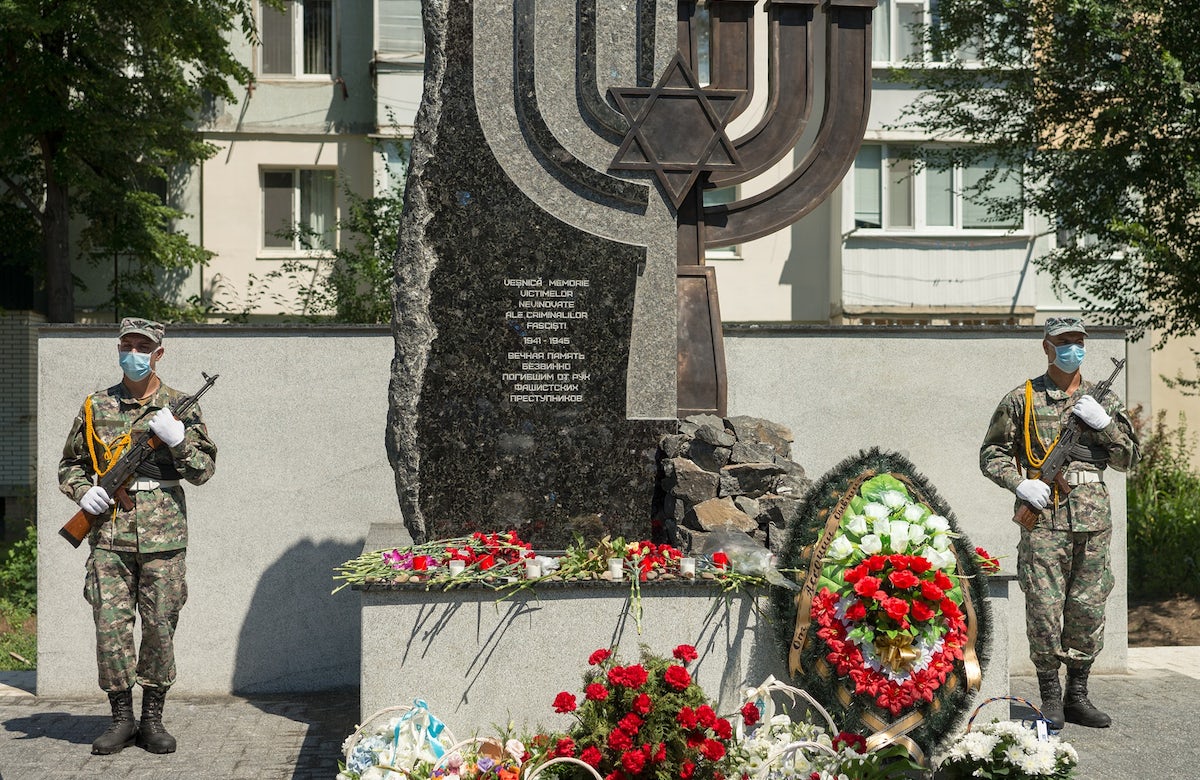 (c) Jewish Community of the Republic of Moldova

A memorial to Jews who perished in the Holocaust was unveiled on 21 July in Cahul, Moldova, where a ghetto had been built to house the Jewish population of the district and its environs in 1941-1944. The inaugural event was attended by local and public authorities of the Republic of Moldova, as well as the leaders of the Jewish community, in limited format due to necessary coronavirus safety restrictions.

At the order of Romanian dictator and the war criminal Ion Antonescu, mass executions of Jews were carried out at the Cahul Ghetto during the Holocaust, resulting in the deaths of thousands of innocent civilians.

The monument in Cahul is a symbol of perseverance and the preservation of Holocaust memory, in honor of these victims. “Each of these sites deserve to be marked and the memory of those perished immortalized” said the organizers behind the memorial.

“It is not enough to talk and write about the Holocaust. Our words must be followed by actions, and our actions must commemorate those who paid with their lives for the tough lesson taught by the Holocaust,” said President of the Jewish Community of the Republic of Moldova, Alexander Bilinkis, at the inauguration of the monument.

Bilinkis expressed his hope that the memorial would serve as a place of reflection for generations of students, their parents, and their teachers to learn about the “difficult, but revealing pages of our common history. We cannot remain silent and avoid giving difficult answers to our children and to ourselves. The Holocaust is a part of the history of this region and it is a part of our history. Denying is not only useless, but also reprehensible. By raising children in the spirit of tolerance and respect for the highest value – life – we can build a different society. This society will not allow the repetition of tragedies in Cahul, Chisinau, Edinet, Marculesti, Vertiujani, Riscani, Orhei and other cities and villages of our country.”

Prime Minister of the Republic of Moldova Ion Chicu remarked in his address of the importance of including Holocaust education in school curriculums. “This is how our children will learn about the horrors of this unjust war. The past is what unites us for our future, making responsible for tomorrow."

Those in attendance at the unveiling included State Secretary of the Ministry of Education, Culture and Research of the Republic of Moldova Andrei Chistol, Chairman of the Cahul Dstrict Marcel Cenusa, Mayor of Cahul Nicolae Dandis, Director of the Jewish Community Julia Seinman, Rabbi of the Jewish Community Shimshon Daniel Izakson, and former ghetto prisoner Sophia Zvonareva.

Chairman of the Cahul Dstrict Marcel Cenusa underlined in his remarks that the Holocaust was a large-scale crime, and that the monument on the site of the former ghetto should remain "a guarantee of the preservation of painful memories and deep regret about the injustice." The memorial also presents the opportunity "to educate future generations in the spirit of universal human values: faith and dignity, prosperity and equality of nationalities,” he said.

A moment of silence and the laying of wreaths, by entities including the OSCE Mission to Moldova, the US Embassy in Moldova, and other international and national organizations took place in honor of the victims.