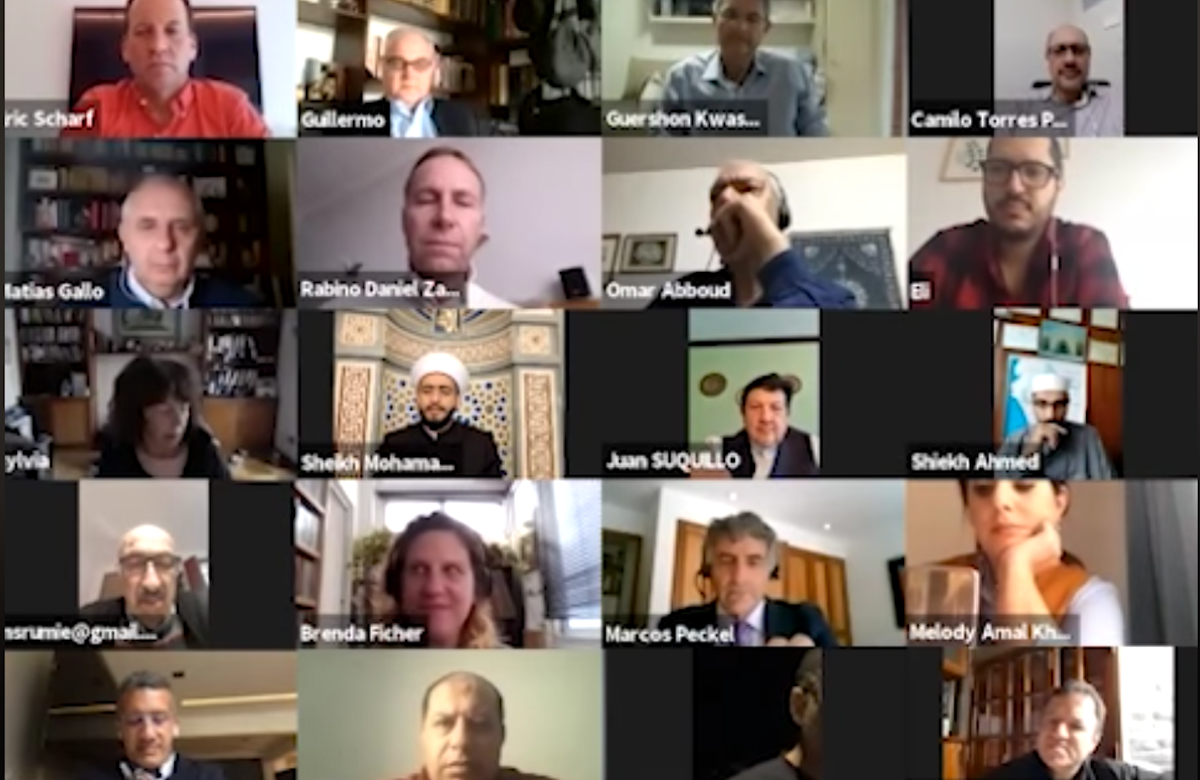 The Latin American Jewish Congress held its seventh annual interfaith Iftar, in which members of the Jewish and Muslim communities in Buenos Aires are invited to come together for the nightly meal during the Muslim month of Ramadan, where fasting during the day gives way to elaborate feasts after sunset.

But this year, due to the coronavirus pandemic, the custom took a different turn. Whereby in the past, the LAJC held the festive dinner at its offices, this year’s Iftar was a virtual event, held during the daylight fasting hours. The participation of Jewish and Muslim leaders throughout the region, however, was stronger than ever.

Representatives of the two faith communities from Brazil, Chile, Colombia, Costa Rica, Ecuador, Panama, and Peru came together with the Muslim and Jewish representatives of Argentina, comprising a virtual iftar of some 50 rabbis, imams, and community leadership from 10 cities, wishing one another Ramadam Kareem, from a safe and healthy distance.

Claudio Epelman, Executive Director of the LAJC, noted the festive spirit in light of the social-distancing restrictions, and underscored that the limits on physical proximity had actually opened this local Buenos Aires event up into a regional celebration.

“For seven years, the LAJC has brought members of the Muslim community of Argentina together with the lay and young leaderships of the Jewish community, as well as senior officials and diplomats. Social distancing, far from hindering the continuation of this tradition, has propelled the spirit of coexistence across the region.”

“The coexistence of different faiths in this part of the world can serve as a much-needed inspiration to others,” Epelman said.

Rabbi Gustavo Kraselnik of the Kol Shearith Israelite Community of Panama and the commissioner for interfaith dialogue of the LAJC, delivered welcoming remarks to those who took part in the virtual iftar. His remarks were followed by Rabbi Michel Schlesinger of the São Paulo Jewish community, who introduced the imam and sheikh of the Brazil Mosque, Mohamad Bukai, who recited the traditional call to prayer.

Soher El Sukaria, Member of the Chamber of Deputies of Argentina, expressed her gratitude for being invited to take part in the celebratory event, stressing the importance of diversity within her parliament and the critical nature of “encouraging others by way of example.”

Rabbis Marcelo Polakoff, Marcelo Bater, Jonás Shalom, Adrián Fada and Eliahu Carvajal of Argentina were also in attendance, together with Omar Abboud, a representative of the Muslim community of Buenos Aires, who called on all present to have compassion for “those whose fast is imposed by the pandemic or others, rather than a choice” as is Muslims do during the Ramadan fast.

Executive Director of the Jewish Community of Colombia Marcos Peckel, Rabbi of the Israelite Center of Bogotá Alfredo Goldshmidt, and President of the Bogotá Islamic Charity Association, Ahmad Tayel, were also present. "Brotherhood emanates from the very body of our religion," Tayel said.

Sumer Noufouri, president of the Islam Institute for Peace, and Adalberto Assad, leader of the Argentine Arab community, also participated. Luis Ibrahim, a representative of the Islamic interfaith committee of Panama, said: “People like us gathered here are those who will make a difference. The obstacle is not the religion, it is the people who distort the religion.”