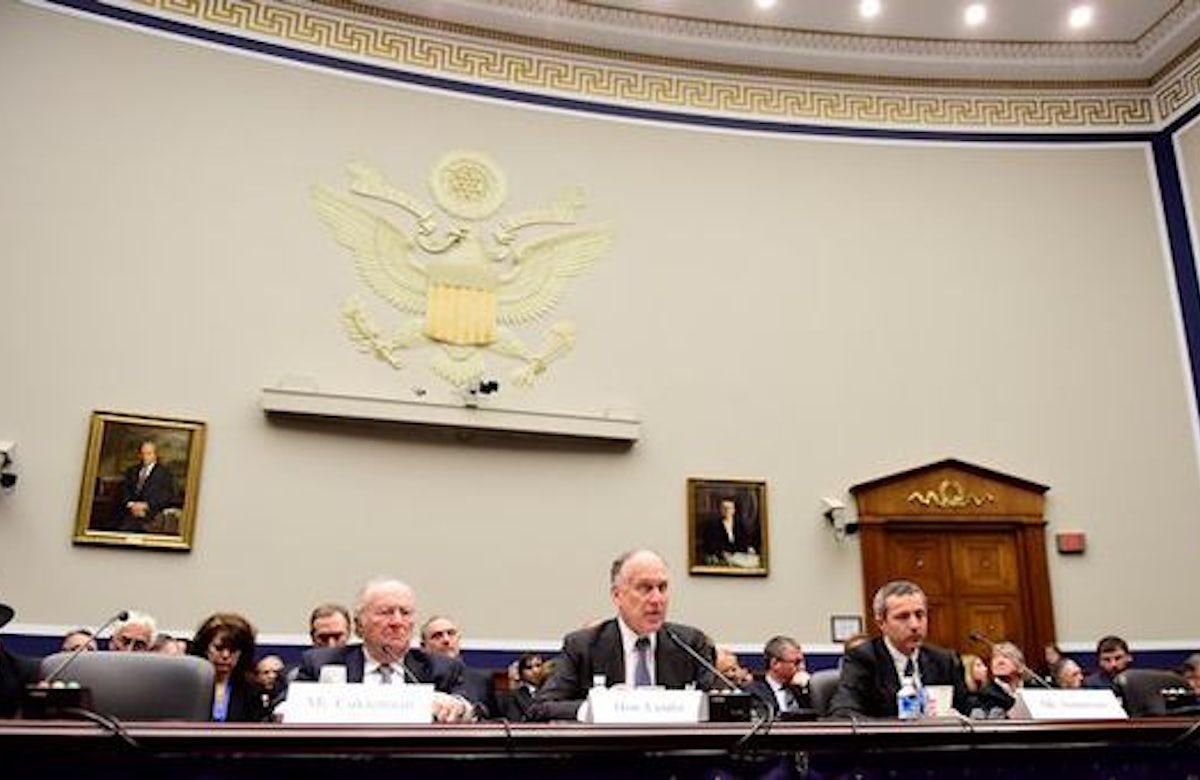 In testimony before a key US Congressional committee on Tuesday, World Jewish Congress President Ronald S. Lauder warned that radical Islam was fueling the flames of a new anti-Semitism engulfing Europe, and criticized the United States for failing to lead the fight to extinguish the threat. 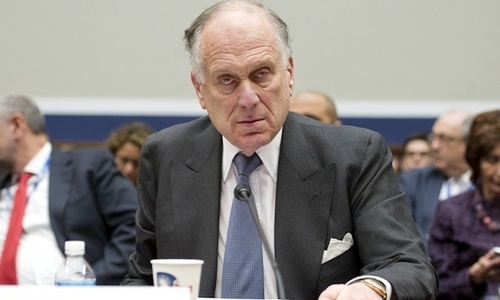 Appearing on behalf of WJC – representing more than 100 Jewish communities worldwide – before the US House of Representatives Subcommittee on Africa, Global Health, Global Human Rights, and International Organizations, Lauder said:  “In order to defeat this new flame of radical Islamic terror and survive, the United States must lead. The United States can and must speak loudly and clearly to condemn this evil for what it is – the radical Islamic hatred of Jews.”

Lauder’s remarks came in testimony today before the House subcommittee, chaired by Rep. Christopher Smith, on the topic “After Paris and Copenhagen, Responding to the Rising Tide of Anti-Semitism.” Also testifying on this issue were Roger Cukierman, president of the Representative Council of Jewish Institutions of France (CRIF), and Dan Rosenberg Asmussen, president of the Danish Jewish community.

Lauder said the recent deadly wave of terror attacks against Jewish targets in Copenhagen and Paris were only the latest signs of a rising wave of anti-Semitism sweeping across Europe. This new form of anti-Semitism is being driven by radical Islam, but pushed along by extreme nationalists on the right and anti-Israel intellectual elites in universities, he said. 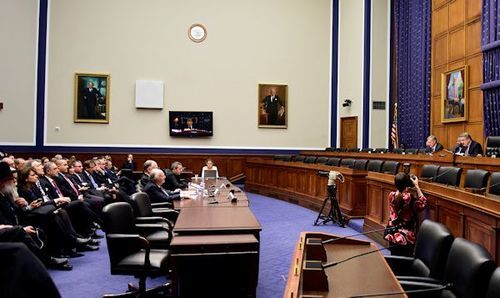 Further, Lauder criticized the absence of any U.S. representation at the anti-terror march in Paris in the wake of the attacks on the satiric weekly Charlie Hebdo and on a kosher supermarket, which drew world leaders and over 1 million participants.

“Many of the leaders in Europe linked arms in solidarity in the very front row, but there was not one U.S. representative with them in the front row,” he said. “I believe that sent a very negative message around the world.”

Lauder cited a string of statistics behind the rising anti-Semitism. Jews represent less than one percent of the French population, but were targeted by more than 50 percent of all racist attacks last year. Anti-Semitic attacks in France, the U.S. and Austria all doubled from 2013, he added. In fact, an EU report from nine nations showed that 16 months ago – long before the latest wave of terror – Jews in these countries were already concerned about growing anti-Semitism.

Lauder concluded by urging the US to take the lead in countering this trend. “Why isn’t the United States leading the world in this crisis?” he asked.

Watch the full video recording of the hearing here

Read the testimony given by Dan Asmussen, chairman of the Jewish Community of Denmark

Members of the Committee,

This particular topic, at this particular moment in history, ‘After Paris and Copenhagen: Responding to the Rising Tide Of Anti-Semitism’ is, sadly, all too timely. And it is reminiscent of an even darker time that we thought was behind us.

Exactly 70 years ago, as American GIs advanced into Nazi-Germany in the last days of the most devastating war in history, the world saw its first glimpse of the horror of unbridled anti-Semitism. The images of the concentration camps that were liberated throughout Europe in the spring of 1945 still cause a universal shudder to this day.

For the first few decades following World War II, we mistakenly believed that anti-Semitism – the age-old hatred of Jews – had finally disappeared from Europe and everywhere else. That is because in the 1950s and 1960s, no one in their right minds wanted to be associated with Nazis.

It is because we all saw where this kind of hatred leads. And, perhaps, people who still harbored these beliefs were too embarrassed to express them openly.

Jews make up less than one percent of the population of France but they were victims of more than half of all the racist attacks in that country last year. The number of anti-Jewish attacks in France in 2014 doubled from the year before.

In Great Britain, the number of anti-Semitic attacks doubled from the year before.

In Austria, anti-Semitic attacks doubled from the year before.

In fact, an EU report from nine nations showed that 16 months ago – long before the latest wave of terror – Jews in these countries were already concerned about growing anti-Semitism. You don’t have to be a mathematician to see an obvious trend here.

There is a hatred growing throughout Europe that is causing Jews to wonder if they should leave … they are asking if there is a future for Jews on that continent. 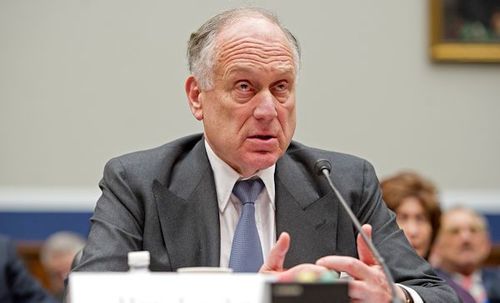 The answer is that a strange confluence of hatred has taken hold across Europe today that comes from very different corners. There are huge populations of Muslim immigrants throughout Europe. Most are peaceful, but far too many of them have adopted radical Islam. There are thousands of young European Muslims that have left to fight with Islamic radicals in Iraq and Syria, and there is a real fear that they could return, bringing the bloodshed with them. Some have already returned and we have seen the consequences.

At the same time, we have seen the rise of smaller right wing neo-Nazi extremist groups that have become political forces in Hungary and Greece and have been seen on the streets in Germany and France.

And there is a third force that may appear more benign, but it adds fuel to this fire. I’m talking about an educated, elitist class – from universities to the media – that has a pathological hatred of Israel.

They would never consider themselves anti-Semitic but they are quite open in their opinion that only Israel is the source of all of the problems in the Middle East. This is intellectually dishonest and devoid of reality. But too many people have accepted their lies as the truth.

And then there is technology. 70 years ago, the Nazis’ chief propagandist Joseph Goebbels used newspapers, film and marches to infuse hatred of Jews into mainstream society. Today, the power of the Internet sends out a constant stream of anti-Jewish ideas at hyper speed and there are not enough people speaking up to counter these lies.

Do you want to know what it’s like to be openly Jewish in Europe today? Just go to YouTube and watch what happens when a young man simply walks down a European street wearing a yarmulke. He is insulted, shoved, spat on - and, as we saw in France, Jews who are openly Jewish can also be killed.

Once again, like the 1930s, European Jews live in fear.

Members of the Committee, in my travels to all of these communities, I am asked the same question around Europe and the world: Where is the United States?

Why isn’t the United States leading the world in this crisis?

Right after the attacks on Charlie Hebdo and the kosher grocery store in Paris, over 1 million people marched in defiance of those murders. Many of the leaders in Europe linked arms in solidarity in the very front row, but there was not one US representative with them in the front row. I believe that sent a very negative message around the world.

When a neo-Nazi party like Jobik in Hungary or Golden Dawn in Greece wins substantial seats in elections, the United States must condemn this in the strongest possible terms.

My fear is that muted condemnations or, worse, silence, could lead to what we saw in Europe 70 years ago and that led to deaths of 60 million people and the destruction of a continent.

We must insist that European nations better share intelligence on anti-Semitic Islamic hate preachers. All countries must better monitor radical Islamic recruiting in prisons, on the Internet and in mosques and, without question, we must closely monitor European and US nationals returning from the Middle East and Africa.

The United States can and must speak loudly and clearly to condemn this evil for what it is – the radical Islamic hatred of Jews.

One of the bravest men in history, Sir Winston Churchill, came to Westminster College in Fulton, Missouri in 1946 and warned us that the Soviet takeover of Eastern Europe was complete and an Iron Curtain had descended across the continent.

Churchill was trying to wake up a sleeping world because too many people didn’t want to believe him. We had just fought a war against totalitarianism and we were tired; we didn’t want to fight another one.

Well, today, it’s not an Iron Curtain that is descending across Eastern Europe. It’s a white-hot fire and its reach is much greater. This new, incandescent flame is scorching the entire Middle East from Tehran across Iraq and through Syria, Lebanon, Gaza and now Yemen. It stretches across parts of Northern Africa. It destroys everything in its path and leaves nothing alive -- not Jews, not Christians and not Muslims who don’t share their exact beliefs. Unless we act right now, the flame of radical Islam could stretch across all of Europe as well.

After Churchill’s speech in Missouri, it took 44 years and billions of dollars to defeat Soviet Communism. We were focused back then, we were committed, we were united with our allies and we were able to win the Cold War without horrific bloodshed. But, in order to defeat this new flame of radical Islamic terror and survive, the United States must lead.

I fear that if we do not stand up to this new foe immediately, it will take us much longer than 44 years to defeat it.

I fear it will cost us much more of our treasure and, most tragically of all, I fear it will consume many, many more lives – not just in the Middle East and Europe, but here as well.

We must not let this happen again.